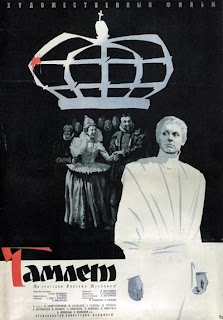 There is something amusing about the fact that what I consider to be the finest on-screen adaptation of this classic English play was done in the Soviet Union and in a completely different language from that used so gracefully by Shakespeare. In certain reviews, I have even read where some consider it suspect to regard such an adaptation so highly, as they are convinced that the power of the language is lost in translation or that such a version is somehow untrue. Since I am far from a traditionalist on such things, I find this a bit much. To me, this is akin to arguing that none of Homer’s tales should ever be done but in Greek and stories like The Count of Monte Cristo or Les Miserables should never be told on-screen unless the actors are speaking French. Translation into foreign languages does no damage to a truly timeless tale, which Hamlet most certainly is. If produced properly, you could perform it in Pig Latin and it would still be gripping.

And Grigori Kozintsev does it properly. I’ll omit the usual detailed plot summary that I include in every review, as I am going to assume that most everyone reading this is at least moderately familiar with the story. If not, I’ll acquiesce and provide a brief and most basic overview: it is about a prince (Hamlet), whose father is killed and whose mother then quickly marries his uncle. Hamlet is then visited by what he believes to be the ghost of his father, who tells him that he was murdered by a plot hatched by the new king. From there, the various plotting and schemes begin to play out, with different characters involved in the intrigue along the way. Shakespeare’s original play contains some of the most quoted and memorable lines in the history of literature, many of which even one completely unfamiliar with his work would recognize. It is commonly cited as being the greatest play that he ever wrote and while I’ll leave such an argument to more learned Shakespeare buffs, I’ll simply add that the eternal appeal of its story is undeniable.

Shakespeare had already been adapted for the screen many times before Kozintsev decided to make this film. Hamlet in particular had been filmed to great acclaimed by the great Laurence Olivier in 1948. The interesting thing about adapting Shakespeare for the screen is that the length of stage performances were recognized as being far too long for the cinema. As a result, certain sections of plays have routinely been cut or condensed in order to bring the films to more manageable lengths. In the case of Olivier’s version of Hamlet, he chose to focus almost entirely on the inner struggle of Prince Hamlet, ignoring the political intrigue that is taking place in the story at the same time. This approach proved to be successful for him, as his film would win the Academy Award for Best Picture that year and Olivier himself would be nominated for Best Director and win the award for Best Actor. To this day it is often held as the movie to which all other film versions of the play are measured against. Kozintsev would go on record through the years remarking that he felt the political subplot was vital to the story and thus he considered it something that had to be included in his film. Still, he would also make alterations to the original play, tailoring his screenplay to better fit the film format. So while he maintained the storyline concerning the historical squabble between Denmark and Norway, he too made cuts (completely eliminating three scenes) and condensed other scenes into much shorter versions. Aside from these alterations, Kozintsev’s screenplay is faithful to the plot as written by Shakespeare. 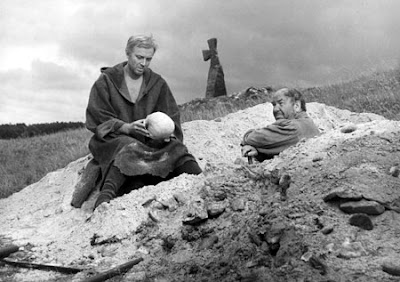 What is so appealing about Kozintsev’s version is that he embraced the fact that he was making a _film_. This is not a production of Hamlet that just so happens to be recorded. Kozintsev recognized that in making a movie, he would not be bound by the same limitations that applied in the theater productions that he had successfully staged in the past. This meant that he could perform sweeping camera movements, experiment with how dialogue was utilized, and give Hamlet the epic visual style that could only be achieved on film. The only comparisons that I can even venture to make are the adaptations that Akira Kurosawa made of Shakespeare stories, with which he included his own striking visual style. But even these are not truly appropriate. For in those instances, it was Kurosawa taking a general story and transplanting it to his own unique setting. Kozintsev essentially took the story as written by Shakespeare, dialogue and all, and projected it on an epic scale that would be worthy of David Lean at his most grandiose.

The final result is a visual masterpiece, with shots and camera work that are at times jaw-dropping. The various exterior shots of Elsinore Castle positioned atop a cliff overlooking the ocean are breathtaking. In fact, all of the exterior shots are incredible, creating an atmosphere that allows the entire film to feel colossal. Just by watching Hamlet riding his horse into the castle or the various shots of huge waves crashing into the rocky shoreline, you get the feel that you’re watching an epic story unfold. The castle is filmed in such a way as to make it feel enormous, with countless number of servants and courtiers always bustling about the premises, and eventually takes on the feel of a gigantic prison. Combining with Kozintsev’s lofty vision of the story is the black and white photography that provides the impenetrable gloom that hangs over everything. The exterior shots that I just recounted are made even more powerful through the performance of cinematographer Jonas Gritsius. Particularly at night, the stark photography perfectly fits the mood and allows for Gritsius and Kozintsev to play with shadows and lighting. The appearance of the ghost of Hamlet’s father is expertly done. Where others would be tempted to overdo it, just the appearance of the shadow is enough. I would run out of adjectives if I tried to fully describe the shots of Hamlet following his father’s beckoning ghost – let’s just say each shot deserves to be framed. Connecting and complimenting everything that Kozintsev does is the score by Dmitri Shostakovich, who is among the greatest modern composers. It fits perfectly.


That fact that this is a film also allows for fascinating use of Shakespeare’s writing. While in a stage performance, all dialogue and thoughts must be spoken by the actor in order to relate them to the audience, in the film Kozintsev is able to get a bit more creative. Just as Olivier would dare to do in his own version, Kozintsev takes some of the inner-dialogues that Hamlet has with himself and utilizes voice-overs to convey them. Rather than having him perform awkward monologues in which he is talking to himself, Kozintsev shows Hamlet deep in contemplation while the voice-overs express his innermost thoughts. This works to magnificent effect during the famed “to be or not to be” soliloquy. Kozintsev has Hamlet walking along a jagged shore, with waves crashing around him, as the soliloquy itself is performed in a voice-over. As the famed speech is read, actor Innokenti Smoktunovsky utilizes perfect physical responses to reinforce the thoughts of his character. It is a powerful scene and among my favorite in the entire film. 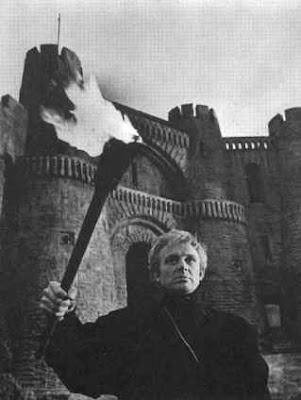 Being an English speaker creates an interesting situation in viewing the film, as the subtitles are created directly from Shakespeare’s original work. So basically, you are watching the visuals created by Kozintsev, while reading Shakespeare in subtitles. As I said, I don’t think this detracts from the film at all, but it could create something of a dilemma in evaluating performances. I could be no judge of how well an actor is delivering the lines of Shakespeare in Russian. What I did feel like I was able to judge is how well the physical characteristics of the performance matched to the words of Shakespeare I was reading. In that regard, Innokenti Smoktunovsky delivers a masterful performance. His take on the Hamlet character is fitting in portraying Hamlet as an enigma. The character works best, I think, when he appears to be walking a fine line between cunning and insanity. How close is Hamlet to being mad, as his mother and uncle believe him to be? Is it all just an act in order to plot revenge against his uncle? At times, Smoktunovsky could make you believe either option.

In the interest of full disclosure, I have to admit that I have recently been on a kick of Shakespeare films. I love seeing different interpretations and seeing the visions of different directors. Plus, not having read the original Shakespeare in quite some time, it allows for me to rediscover these great stories in varied and interesting ways. Grigori Kozintsev would go on to make another spectacular Shakespeare film (his version of King Lear will be a contender for 1971), and directors ranging from Olivier, Kurosawa and Polanski would provide their own interesting takes of good ol' Billy's works. But it is hard for me to cite anything other than this film as my favorite screen adaptation of a Shakespeare play. Re-watching it for the purposes of this countdown only bolstered this claim. Marrying the brilliance of Shakespeare’s language with unsurpassed visual beauty is an unbeatable combination.

Other Contenders for 1964: I’m a bit shocked myself not to be choosing Stanley Kubrick’s Dr. Strangelove. When I started the countdown, I was fairly certain that it would be the pick for this year. And truth be told, if I were making choices another day, I might very well pick Dr. Strangelove and I would be perfectly content. It’s a great film, hilarious to this day, and one that is somehow both dated (in a good way, meaning it is a perfect capsule of an era) and timeless.

This was actually quite a huge year in terms of cinema around the world. For the most part, I’m going to just list other favorites. But one film I do need to say something for, which I had never seen until I forced myself to do it for this countdown, is Pier Paolo Pasolini’s The Gospel According to St. Matthew. This film has stuck in my mind since I watched it, which is remarkable considering how I didn’t expect to like it at all. As a non-religious person, I figured I would just watch this one in order to say “I’ve seen it” and move on. Instead, it was quite powerful and does an extraordinary job of making events that have attained mythical status, as most stories of the Bible have, and making them feel so human.

The other films that were considered and are worthy of mention: A Fistful of Dollars (Sergio Leone), Kwaidan (Masaki Kobayashi), Marnie (Alfred Hitchcock), Onibaba (Kineto Shindo), Gertrud (Carl Theodor Dreyer), Zulu (Cy Endfield)
Posted by Dave at 7:46 AM