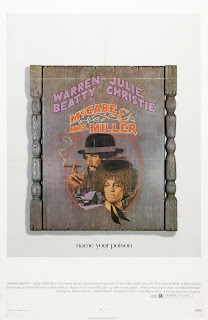 [NOTE: This was the first review ever written for this blog, and is re-posted here with only minor alterations. In reading back through it, I like to think that my writing for the site has improved somewhat, but I do stand by this write-up and think it captures what appeals to me so much about this film. I have added an "Other Contenders" section at the end to fit with the Year's Best Countdown, but other than that have kept the original review intact.]

The 1970s output of director Robert Altman is not only rightfully celebrated for its excellence but also because of the versatility he displayed in the various genres he tackled, and in many cases deconstructed, with his work. Over the short time span between 1970 and 1975, Altman was nothing short of prolific. During this time he produced his landmark anti-war film M*A*S*H, a complete re-working of the classic Philip Marlowe private eye character in The Long Goodbye, and a film that certainly left an impact on future generations of directors (here’s looking at you Paul Thomas Anderson) with the release of 1975’s Nashville. However the best movie he made during this incredibly creative period may very well be this exceptional 1971 release.

McCabe & Mrs. Miller is unique from nearly any western to come before it. Until the climax of the film, it is essentially free from the usual macho, tough guy bravado and wild shootouts that have long been staples of the genre. It moves at a pace that could be described as lumbering, focusing more on the thoughts and actions of gambler John McCabe than on action to propel the storyline. To refer to this as an anti-western would be cliché, but as the viewer is drawn into the movie it becomes apparent that the picture being painted of the settling of the American frontier is not one that is very pleasant for anyone involved. 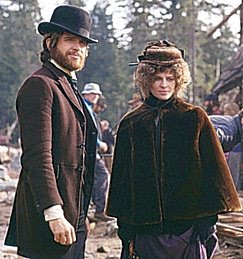 The story centers on gambler and entrepreneur John McCabe (Warren Beatty), who rides into the upstart mining town of Providence City. With the reputation of a former gunslinger, McCabe is able to angle himself into the purchase of property on which he plans to build a saloon to house everything from gambling and drinking to a whorehouse. In the process of constructing his business, McCabe meets Constance (Mrs.) Miller (Julie Christie), a veteran madam who convinces him that the real money is in creating a high-class establishment with fine women and equally fine prices. Mrs. Miller manages to convince him that she is precisely the person who can help him create and run the business, promising to import and manage the women herself. After taking her in as a partner, McCabe quickly establishes himself as the leading businessman in town.

The problems start for McCabe when a large mining company begins to make overtures about buying out all of McCabe’s interests in Providence City. Continually rejecting their tempting offers, McCabe believes that he is playing hardball in negotiations, expecting the miners to begin increasing their offers. Instead, the mining company decides to take the business by force, turning the matter over to a mercenary of sorts to see that McCabe is pushed out. On top of this, McCabe’s life is further complicated by the fact that he has fallen in love with Mrs. Miller. McCabe resists Miller’s urgings to leave Providence City and start over in a new town, leading to his inevitable showdown with the mining mercenaries. 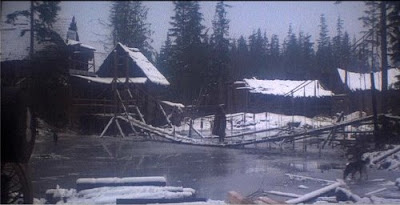 The overwhelming sense of griminess and filth is felt throughout the entire movie. Providence City is not like the settings in a John Ford or Howard Hawks western. The photography from cinematographer Vilmos Zsigmond is dark and extremely gloomy. The town is filthy, full of puddles, mud, and grime. Snow seems to fall at nearly all times. It works to create quite a brooding atmosphere, but one that fits perfectly with the pacing of the film and laid-back nature of the characters. The strength of Zsigmond's work cannot be exaggerated. There are certain shots in the film that are stunning and gorgeous. These are contrasted with the filth and dirt described above and create an unsettling feeling to all of the visuals.

The fact that there is not “action” in the traditional sense for most of the film adds to the dream-like quality. The film simply flows. McCabe is a man who is on a journey to try and find a place of his own, where he can put down roots and escape his “Pudgy” McCabe persona from the past. This is driven home in the scenes of him traveling in the stark Northwestern landscape, set to the soundtrack created by Leonard Cohen. Is he really simply trying to up the ante with the mining company or is he hesitant to sell his business because he appears to have finally found a place of his own where he can be successful? I think that is open for debate, as he only willingly looks to make a deal once he recognizes the forces that have been aligned against him. The gloominess is repeatedly broken up by lighthearted moments and quips, usually coming from McCabe himself. Things like his trademark line of “If a frog had wings, he wouldn’t bump his ass so much” manage to lighten things, but never to the point where you forget that there is a distinct feeling of doom hanging over the dealings of John McCabe.

This is my favorite performance from Warren Beatty. He plays the character to perfection. He is equally adept at showing McCabe to be an enterprising businessman and in displaying the idiosyncrasies of the character – things like drinking his double whiskey with an added raw egg or the constant conversations that he has with himself. It is an interesting lead character in a Western, as it's a character that is rumored to be a former gunslinger, but not someone who ever comes off as believable in the role. In addition to the persona that McCabe uses to push himself to the top of business in the town, Beatty is able to show how tenuous a grasp that McCabe truly has over his own emotions and situation.

While I don't intend to give away all the details as to how the movie plays out, this article would be incomplete without mentioning the stunning finish to the film. McCabe recognizes that the three mercenaries sent by the mining company are making their way across the town in order to kill him. At over twenty minutes in length, this cat-and-mouse game played out in a heavy snow storm is incredible to watch. Filmed without any soundtrack or background music, it is just with the sounds of the men crunching through the elements and trying to get the drop on the other. It is truly an iconic sequence of events and the final frames of the film are unforgettable. 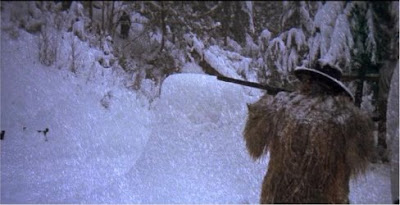 As already mentioned, Robert Altman made a number of outstanding films over the course of his career, but this is without question my personal favorite. Although it is different from traditional westerns, it is as atmospheric in its own unique way as any other film in the genre. Equal parts humorous and tragic, Altman manages to draw you deep into the story and keep you hoping that things do not turn out as desolately as you recognize they likely will.

Other Contenders for 1971: A really solid year in 1971, if not quite reaching the heights of the top films in surrounding years. The two closest contenders for me in this year are actually two Shakespeare adaptations. I have to confess that I've been on a Shakespeare on film binge lately, but I still think that these are outstanding movies regardless. Grigori Kozintsev has already made this countdown with a Shakespeare adaptation with 1964's Hamlet and he also repeated the feat with this year's King Lear. I slightly prefer the Hamlet, but this one is excellent as well. The other one given serious consideration was Roman Polanski's Macbeth. It's very bloody and violent, which is to be expected considering this time period in Polanski's life. But Macbeth is a story that is very bloody and violent even in its original form, so it fits.

Some others from 1971 that I really like: The French Connection (William Friedkin), Dirty Harry (Don Siegel), and Murmur of the Heart (Louis Malle). And, due entirely to the love of this film by Sam Juliano, I did revisit The Last Picture Show (Peter Bogdanovich) for this countdown and had a more positive experience with it than I had in the past. I still don't consider it at the same level as Sam and most others do, but I can now say that I like it. Does this make me a hypocrite? Possibly, but I think it's fair for tastes to change over time.

I dislike Stanley Kubrick's A Clockwork Orange like no other, so I won't devote much time to it outside of recognizing it's place in cinematic history and that I am in the _extreme_ minority with this opinion of the film.
Posted by Dave at 8:45 AM