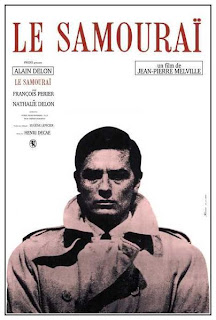 - “There is no solitude greater than a samurai’s, unless perhaps it is that of a tiger in the jungle.”

With 1967’s Le Samouraï, director Jean-Pierre Melville generated the perfect mix of style, coolness, intelligence and suspense, and crafted one of the best crime dramas to ever be released. In terms of style and “cool,” none has ever been able to equal hitman Jef Costello, or even more so, the overall atmosphere created throughout the entire film. It screams of being hipper than anything you’ll ever see. Far from being based entirely on style, the script and direction takes the ultra-cool Costello character and allows Alain Delon to carry out a study into what makes a man like this tick. Melville probes into the killer’s psyche, laying out and ultimately testing the code that he has lived by for his entire professional life. And all of this is done in such a manner as to feel like one big game of chess, pitting the police force of Paris against the lone wolf assassin. It is suspenseful until the end and when it finally reaches its dramatic conclusion, it allows each viewer to recalibrate the events of the story to fit their own interpretation of the finish.

So with that opening paragraph I’ve pretty much laid it all out as to why I consider Le Samouraï to be among my favorite films. Since in most of my reviews here I’m not exactly into the whole brevity thing, I’ll soldier on, but I think that paragraph succinctly sums up why I praise this film so much.

Jean-Pierre Melville was such a versatile director and he has many films that I adore, but anyone who watches his movies will instantly understand that this is a man that had a passion for American noirs and crime dramas. The influence is glaringly obvious in 1962’s Le Doulos, where he uses black and white photography to great effect, creating scenes that one would expect from directors like Siodmak or Lang in their noir heydays. The same is true of Le Samouraï, despite the fact that it is not filmed in black and white. The fact that it is shot in color is incidental, as the same atmosphere and visual tones are created by Melville throughout the film. They may be in color, but every visual has gloomy overtones. The interiors are shady nightclubs or dim apartments, the exteriors involve chases through city streets or driving through gray skies and rain. Every action is ominous, every camera movement is used to generate suspicion, and the result is Melville taking a very leisurely-paced film and making it thrilling. 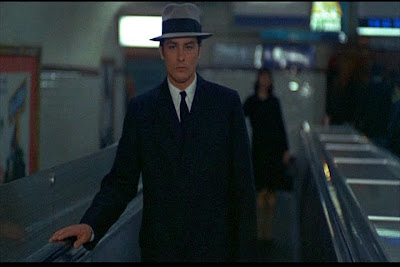 The fictitious samurai code that is displayed to start the film (Melville made it up) is descriptive of the life lead by Jef Costello (Alain Delon). Costello is a supremely confident freelance hitman, whose services are continually in demand due to his perfectionist nature. He works and lives in complete solitude, with the exception of late-night trysts with his part-time girlfriend Jane (Nathalie Delon, Alain’s actual wife at the time of filming). He lives in a sparsely furnished apartment, with little more than a bed, a bookcase, and a pet bird that he shows a unique affection for. Such a character also reveals Melville’s love of American noir, as anyone familiar with 1942’s This Gun For Hire will immediately recognize the similarities between Jef and Alan Ladd’s Philip Raven. Like Raven, Jef’s entire life revolves around the contracts that he receives and seeing that they are carried out efficiently and without incident. This is telling because in the assassination that opens the film, Jef is uncharacteristically sloppy in his execution, allowing several witnesses to see him, among them the beautiful piano player Valerie (Caty Rosier). When he is arrested for the murder, he is placed in a lineup and appears to be sunk. However, when asked to identify the killer, Valerie surprisingly declares that Jef is not the man, even though it appears that there is a twinkle of recognition on her part. 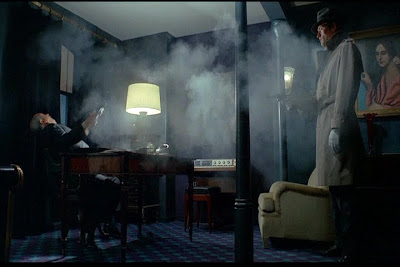 The police are forced to release Jef, but the Inspector (François Perier) is convinced that he has found his man. The ambiguity between the good guys and the bad is highlighted by the methods used by the Inspector in his efforts to convict Jef. The Inspector tries to blackmail Jane into admitting to lying by corroborating Jef’s alibi on the night of the murder. Jane, the ever faithful girlfriend, refuses and resigns herself to accepting the wrath of the Inspector.

For Jef, his life is in disarray after the messy contract. On one end he has the police trying desperately to catch him, using elaborate measures to track his movements and planting bugs in his apartment. There is a wonderful sequence in which the Inspector communicates officers via radio, directing them in following Jef through the Paris subway. The underworld is also after Jef because of his shoddy performance. When he goes to meet the contact of his employers, rather than receiving payment for his services the contact tries to kill him. Jef is only wounded, but it sets him down a path of trying to discover who it is that hired him and then tried to have him killed. Eventually, the same man who took a shot at him tries to hire him to kill the employer, Olivier Rey. Sensing a setup, Jef quickly surmises that he is being hemmed in on all fronts. He eventually decides that his only way out is one final job, but this time he doesn’t even bother with his usual precautions. 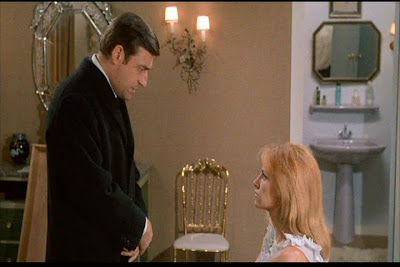 The superstar of the film for me will always be Jean-Pierre Melville, for the various reasons I have already expounded upon, but Alain Delon and François Perier work as perfect foils. Delon plays the brooding Jef in such a way as to at first make him come across as an enigma, but the more that he reveals about the character the more obvious it becomes why the movie is titled Le Samouraï. Despite the gruesome work he does, Jef is a man who most certainly lives by a code. He believes that there are ways that things are done in his business and that certain things are off-limits – after all, how else can one explain the ending? Conversely, the Inspector, who is supposed to be the good guy, is not above bending the rules in order to attain his own goals. He tries to strong-arm Jane and is determined to convict Jef at all costs. In comparing the two, the argument can actually be made that Jef is the more honorable of the two in adherence to the particular code that each has vowed to follow.

It is funny that once again in this countdown, in a year that is seen as ground-breaking in Hollywood, that I choose another French masterpiece to trump the many great films from the United States in this year. Le Samouraï is that good and is absolutely essential for everyone interested in cinema to see.

Other Contenders for 1967: A pair of legendary American films come in a close second for me in this year. The first is Mike Nichols' The Graduate, which is always a joy to watch. It manages to be both artistic and fun, at times laugh out loud funny. The malaise that can set in at a time like graduating from college is something that I can certainly relate to. Plus, it has some of the best use of pop music in film. The second movie of this pair is Bonnie and Clyde, directed by Arthur Penn. This was certainly a trendsetting film, but leaving all that aside, it is also very entertaining. This isn't my favorite performance from Warren Beatty, but he is still outstanding.

These two films and Le Samouraï really stand out from the pack for me, but here would be other films to acknowledge for me in 1967: Wait Until Dark (Terence Young), Belle de jour (Luis Buñuel), Playtime (Jacques Tati), Point Blank (John Boorman), The Red and the White (Miklós Jancsó)
Posted by Dave at 8:21 AM