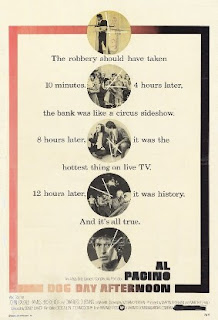 For a movie that has a soundtrack consisting of just a single song, Sidney Lumet and company make excellent use of it to open this 1975 bank heist film. It is an integral part of what is one of my favorite opening sequences. To the strains of Elton John’s Amoreena (off of what I consider to be Sir Elton's finest album, Tumbleweed Connection), Lumet guides the audience through various views of people hustling and bustling around New York City. We see construction workers digging on a sidewalk; people walking down the street; window shoppers; kids playing. And in the background, Elton sings over the piano and electric guitar riffs. It’s like the grungy, less romantic answer to the even more spectacular opening sequence that Woody Allen would use in Manhattan. Both are superb filmmaking, and in reviewing films for a 1975 selection, seeing these first few moments of the film reminded me how much I enjoy Dog Day Afternoon.

I see 1975 as another year that has a large number of worthy candidates, although on a personal enjoyment scale they don't quite stack up to some of the preceding years. That’s a highly subjective statement, obviously, and there are a number of movies released in this year that are iconic for a lot of movie fans. Still, having a number of films bunched together makes picking one for a countdown like this even more difficult. I went back and forth on this pick, but ultimately decided to go with a stellar Al Pacino performance for the third time in four years. 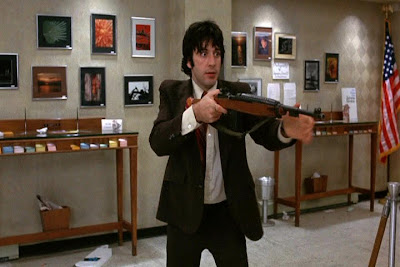 The great appeal of Dog Day Afternoon, for me, is that it can be appreciated for a variety of different reasons. Do you want to just sit back and take in a thrilling bank robbery adventure? Dog Day Afternoon fits the bill. Want to watch a film that encapsulates many feelings toward the authorities and establishment that were percolating throughout the nation at this time? Dog Day Afternoon fits the bill. Wish to see a film that makes creative, yet very pointed commentary on something as vital to everyday life as the media? Dog Day Afternoon certainly does this. Or maybe you wish to take in the dark humor that is associated with the various bumbling and plotting of Sonny and Sal as they try to pull of the heist? Even though the material is quite serious, there are certainly laugh out loud moments peppered throughout the film.

The bank robbery is underway right at the start of the film, as Sonny Wortzik (Al Pacino) and sidekick Sal (John Cazale) enter a bank in Brooklyn with the intention of getting in and out quickly. Instead, things immediately take a turn for the worse. Their third accomplice gets cold feet midway through the robbery and leaves. Then, when trying to burn bank records that would track some of their loot, Sonny unwittingly alerts people across the street to smoke coming out of the building. Hundreds of police officers quickly surround the bank, meaning that Sonny and Sal now find themselves in a hostage situation and scrambling to devise a plan to get away unscathed. Sonny engages in negotiations with Detective Moretti (Charles Durning), trying to secure a plane to fly he and his accomplice out of the country. Throughout all of this, large crowds have begun to gather around the building, with spectators rooting on Sonny as some kind of working class anti-hero. When Sonny, an acknowledged Vietnam veteran and ex-con, emerges from the bank and begins taunting the police with chants of “Attica! Attica!” the crowd responds with cheers. The media begins to swarm, calling Sonny for questions inside the bank and generally turning the entire thing into a live, prime time circus. 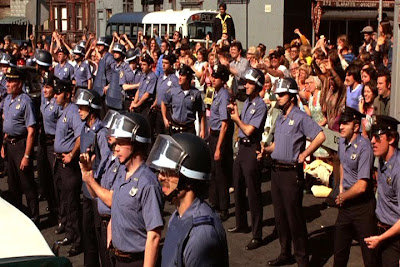 It's actually pretty standard fare as far as bank heist movies go, but what sets Dog Day Afternoon apart from any other is Al Pacino. I wouldn’t refer to this as my favorite performance of his career, but I would certainly be inclined to give it the nod as his best. As the pressure begins to mount in the standoff, Sonny begins to break under the pressure and Pacino explicitly carries out this disintegration for all to see. Pacino is perfect as the fast-talking, streetwise Sonny, a guy who is obviously one can short of a six pack but yet is smart enough to keep the surrounding police on their toes. The tighter things get in the negotiations, the more the sweat begins to roll down Sonny’s face. Through Pacino’s speech and mannerisms, you are able to feel the anxiety as it increases. As the entire situation begins to go turn into an unmitigated disaster, the physical appearance of Sonny begins to follow suit. And yet, throughout it all, it becomes apparent that Sonny is different from the usual coldhearted bank robbers portrayed in such films. He seems to genuinely care about the fate of the hostages he is holding, even to the point that they seem to have developed uncommon bonds amongst each other.

Also worthy of praise is the performance of Durning as Moretti. The interaction between Moretti and Sonny feels so natural, which is quite the compliment considering how unnatural the entire situation is. The flow of dialogue and banter back and forth between the two is just so smooth – it is rapid-fire and tense, yet it never feels like someone is reading it from a script. It very much feels like how one would expect people to talk in such a situation. John Cazale is also his usual solid self, doing what he does best: playing a dimwitted man who finds himself in a situation well over his head. In this case, however, Sal is beyond even the dullness of Fredo Corleone. Sal is quite obviously not completely there mentally. Still, he is committed to seeing the robbery carried out to the end, and much of the comedy in the film is a result of Sal’s comments and ideas. 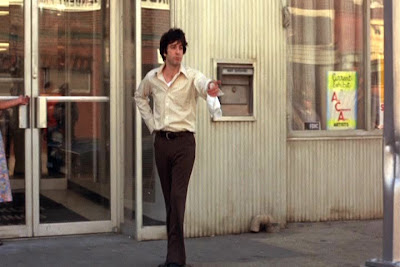 I can see where many would find this to be rather cheesy and the performance from Pacino over the top. Perhaps in spots it is. Even so, I have always found it entertaining and think that the ideas put forth through Sonny about the media looking forward to showing the guts of people like his sprayed across the sidewalk to be pretty accurate. It might be a movie that is forever attached to the era of the 1970s, but certain aspects like this give it appeal that stretches into the present.

Other Contenders for 1975: There were basically four other films that seriously factored into my decision for this year. These four are basically interchangeable for me in terms of ranking, and any of them could have been chosen for this year and I would have been fine with it. But, obviously, the whole point of this countdown is to try and make tough decisions like this. At any rate, here are the four: First is Robert Altman's most acclaimed film, Nashville which has been imitated many times over the years. It's not my favorite Altman, but it's close. Next is the Steven Spielberg blockbuster Jaws, which some cast aside as mere popcorn entertainment but it is a truly suspenseful film. In preparing for this year I finally watched Stanley Kubrick's Barry Lyndon, which is a very good film. The thing that held it back from the top spot for me is the fact that I definitely preferred the first half of the movie, before he turned into the titled Barry Lyndon, and felt that the second half started to drag somewhat. And finally, for an underrated contender, I also seriously considered Stuart Cooper's Overlord which is an incredible blending of documentary footage and original shooting. It is very well made and another that I'm glad I was finally able to see.

Two common favorites from this year that I imagine will have support are One Flew Over the Cuckoo's Nest (Milos Forman) and Picnic at Hanging Rock (Peter Weir). I have personally never been a big fan of One Flew, so it was never a contender. And to this day, even after watching it a few times, I'm still not completely sure what to make of Picnic at Hanging Rock. It's on that fine line of either really liking or hating, and I'm not sure which side I'm on.
Posted by Dave at 8:40 AM