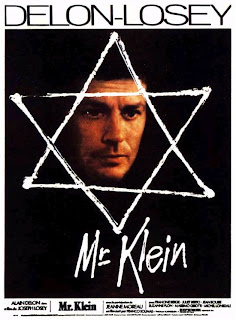 There are a multitude of legendary films that were released in 1976, but for once I completely escape the charge of following the crowd with my selection. The big name movies of the year were very tempting for me – Martin Scorsese has long been a favorite and many contend that Taxi Driver is his finest achievement. Sidney Lumet could have taken the top spot in back-to-back years based upon the strength of the satirical Network. Even Clint Eastwood came very close with what I consider to be his first undisputed classic western, The Outlaw Josey Wales. All three are outstanding films, and yet I’m still caught in the spell of mystery and intrigue that is woven through Mr. Klein. Each time I watch it I seem to pick up on something that I missed in previous viewings, and even though I’m still not completely certain that I could outline a completely consistent summary of what transpires, I’m always up for trying to do so anyway. 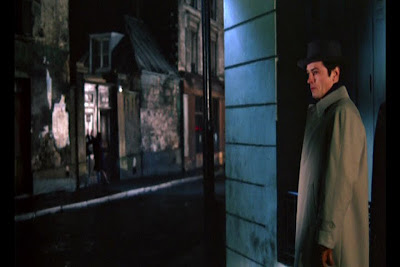 For a movie that was made by a well-known director and that debuted at Cannes where it lost out on the top prize only because of Scorsese’s Taxi Driver, this is a relatively unfamiliar title to most people. I’m not claiming that it’s completely unknown, and perhaps I’m simply behind the times and everyone actually has seen it, but based on its credits and accomplishments it is not as recognized as one would expect. Perhaps part of it is due to the circumstances under which director Joseph Losey left the United States and Hollywood. Soon after becoming an accomplished noir and thriller director, Losey found himself blacklisted and a victim of the House Un-American Activities Committee. But even this doesn’t really explain it, as Losey would go on to direct many celebrated films in London, most notably 1963’s excellent The Servant. After a highly successful debut at Cannes, Mr. Klein debuted in France and flopped. Opinion has since turned somewhat and become more positive, but it’s still an unknown commodity to non-cineastes. The regulars reading this have probably seen it or are at least familiar with it, but trust me when I say that your average movie fan is clueless about it.

All of this is basically my roundabout way of getting to the point that I might be stepping out on a limb with this selection, and I recognize this. Enigmatic stories like this can produce radically different reactions. I would not be shocked if many knowledgeable folks consider this to be a bust or at least not being anywhere near the equal of the other fine films of the year. This is what keeps things interesting though, so I look forward to seeing how others respond to the film. 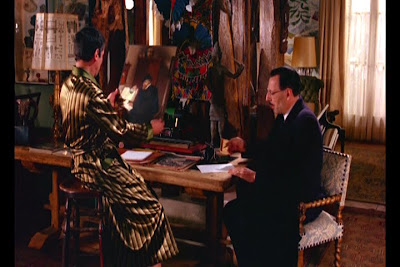 The crux of the film hinges on the fact that the surname “Klein” is one that is common to many cultures. It can be German, French, Jewish, Catholic and many other subgroups. This is a key point, because the Robert Klein (Alain Delon) that is the main character of the film comes from a family that has long been French Catholic. Living in Paris during the war, Klein operates as an art dealer who is capitalizing on the Nazi persecution of the Jews. Realizing that many Jews are in need of cash quickly and thus will unload their artwork at bargain prices, he begins buying and reselling them for a profit. He makes a good living in the trade, becoming a playboy of sorts, living in a posh apartment and having girls pursuing him. Things take a sudden turn, however, when he opens his door one morning and sees a Jewish newspaper addressed to him. Klein quickly becomes concerned, as the names of all of the subscribers to the newspaper have been turned over to the authorities and he worries that he might now become a target himself.

Klein them begins a fanatical search to try and uncover the circumstances of this mix-up. Gradually, he begins to discover that there is another Robert Klein, who is in fact Jewish, that appears to be trying to set him up to take the fall for him. There are various twists and turns that take place, but I don’t want to ruin any of the experience for anyone who has not yet seen the film. But what I will point out is that Losey truly is a master at slowly and gradually building tension; with each added wrinkle or discovery that Klein makes, things grow even more eerie. In fact, at times I even began to question whether what I was watching was reality or some kind of hallucination. 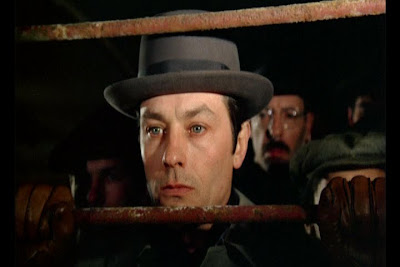 As far as acting goes, I would also have to say that this is among the best that I have seen from Alain Delon. He certainly was in movies that I think are superior to Mr. Klein, but in those the brilliance of his performance resulted from body language and the way that he carried himself. The detached, coldblooded loner is something Delon mastered very early in his career. In this case, Delon plays Klein as a man who becomes completely obsessed with finding out why he is being set up by the other Mr. Klein. He is understandably frantic about what might happen if he is labeled a Jew, but the paranoia manages to move beyond even that. At a certain point, Klein obtains the means to prove his family heritage and absolve him from any of the charges he is facing. Even this is not enough, however, as he is more concerned with finding out whom the other man is and why he concocted the entire scheme.

Again, I could be completely wrong and not realize that everyone has seen this, but for those that have not I won’t go deep into plot or interpretation. I will comment, however, on the issue of what statement is being made concerning those who observed the persecution of Jews. Is Losey placing blame on anyone or any particular group? I don’t know that I could pinpoint a particular group of people, so much as they seem to be commenting on everyone that stood by and watched the subjugation take place. It doesn’t come across so much as finger pointing as asking, “can you believe people allowed it to happen like this?”

This is not going to be a film for everyone, but it’s one that has obviously drawn me in.

Other Contenders for 1976: The three films I mentioned at the beginning of this write-up are the three highest-finishing runners up. I don't consider Taxi Driver to be quite as good or enjoyable as other favorite Scorseses, but it's undeniable a great movie. De Niro has yet another outstanding performance. His body of work in this decade is nearly incomparable. Being a huge fan of westerns and Clint Eastwood as a director, The Outlaw Josey Wales will always remain a top selection. Network ranks behind only Dog Day Afternoon for my favorite from Sidney Lumet.

Some of the other films that I really like from this year, but are slightly below the others: 1900 (Bernardo Bertolucci), Rocky (John G. Avildsen), All the President's Men (Alan J. Pakula), Cria Cuervos (Carlos Saura), and The Shootist (Don Siegel).
Posted by Dave at 7:47 AM