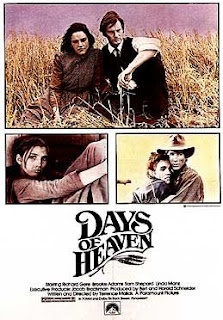 - "Nobody's perfect. There was never a perfect person around. You just have half angel and half devil in you."

I’ve mentioned it a few times on the blog, but I love Terrence Malick. Of the four films that he has released, only Badlands ranks below “masterpiece” in my own personal and highly subjective rankings. The other three have an extraordinary hypnotic effect on me. The visuals are not only stunningly beautiful, they are powerful to the point of completely engrossing me in the entire experience. All three of the films that I am referring to – Days of Heaven, The Thin Red Line and The New World – are as gorgeous as films can be, with every shot worthy of being framed and put on display in a museum or art gallery. But of the three, even thirty-one years after its release, Days of Heaven maintains a lofty position in terms of its look. It could be argued that for all of the technological advances in photography and movie-making in general, there has still yet to be a film made that is as beautiful as Days of Heaven.

This is a review that might be shorter than most, as I don’t consider myself a strong enough writer to put into words the power of the images in this movie. It’s something that simply has to be experienced, absorbed, and then reflected upon. It’s another instance of a movie that is likely to creep up on you, leaving you feeling a little cold or underwhelmed on a first estimation, but one that will have images seared in your mind. Malick’s debut film Badlands also contained its share of impressive photography, but the director did not yet fully employ the contemplative style that has come to be his trademark. The use of narration to frame a story and sometimes even convey character sentiments, as is customary in Malick films, was there. But in Badlands, there was still a traditional storyline. The travails of Kit and Holly were still a revamping of the enduring lovers on the run tale. In his second effort, Malick would almost completely abandon the notion of a plot-driven storyline, and instead work to use images and carefully constructed scenarios to try and get an emotional response from the viewer. 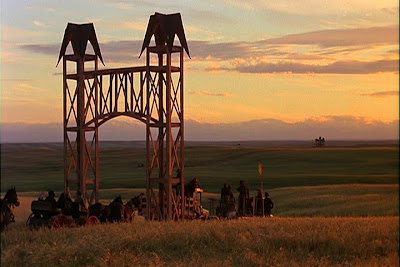 This is not to say that there is no storyline. In fact, the story itself has become more and more compelling to me the more times I watch. The tale is set in 1916, just before the United States enters the First World War. Bill (Richard Gere), a laborer in Chicago, is involved in an altercation on the job and inadvertently kills a co-worker. He quickly goes on the run, taking his teenage sister Linda (Linda Manz) and girlfriend Abby (Brooke Adams) and flees to the farmland of the Texas Panhandle. The three manage to get hired as seasonal workers on a large farm in the area, owned by a young farmer (Sam Shepard) who is dying from a mysterious illness. The Farmer is taken by Abby, quickly falling for her, and when Bill learns of the health issues of the man he encourages Abby to marry him and inherit his fortune. Abby reluctantly agrees, convincing the farmer that Bill and Linda are her siblings. Things appear to be going smoothly until the true nature of the relationship begins to emerge and Abby actually begins to fall in love with Sam. In reading this synopsis, I can see that this actually sounds like something of a soap opera, but it does not at all play this way. The pace is very laid-back, and all of this just seems to flow into being, rather than being propelled to any kind of predetermined outcome. 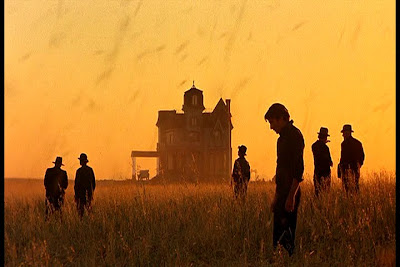 I have often seen the story referred to as “biblical” and this is a fitting description. And I don’t even know that I can explain why such a description is so appropriate, but it just feels right. Perhaps it’s the fact that the title of the film comes from the Bible. Or the fact that in the shattering conclusion, a plague of biblical proportions reigns down and punishes all involved. The story is at times triumphant, at times heartbreakingly sad, and even without the usual action or plot-forwarding devices being employed, it has never failed to hold my attention. It may move slowly, but that is to the film’s credit, as it gives more time to take in the scenery. Make no mistake – no matter how interesting or uninteresting you might find the storyline, it’s the photography that sets this film apart.

Not being one that is all that familiar with movie production, I’ll admit to not knowing how much praise should be given to the director and how much to the cinematographer for the look of a film. With it being the chief domain of cinematographers, it would make sense to give them the lion’s share. I bring it up though, because considering that _every_ Malick film looks spectacular, and that he has worked with a different cinematographer on each of the four, I’d be willing to wager a cold one that Malick is a major factor in the beauty of his films. So I’ll go ahead and honor both Malick and cinematographers Nestor Almendros and Haskell Wexler for the accomplishment. Almendros was the original director of photography, but due to time issues he had to leave before the film was completed and Wexler was brought in to finish up. The most amazing thing to me is the fact that Almendros was losing his eyesight at this time and still managed to do such exquisite work. It is interesting to read the comments Almendros would later make concerning the photography and production, as he would acknowledge that Malick made it very clear to him that he wanted a film told through images. Almendros also often referred to the practice of shooting during what he called the “magic hour,” which is the time period just before the sun is setting. While it sometimes made filming a bit more difficult, the results speak for themselves. The effect of shooting at the “magic hour” is seen throughout, as the natural light displayed in shots bounces off the scenic plains and is breathtaking. 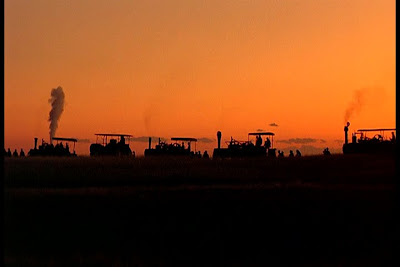 Also contributing significantly to the mood of the film is the typically gorgeous score from Ennio Morricone. While it is not as flashy as some of his other well-known work, it fits the photography and style of the movie perfectly. The music is as laid-back and thoughtful as the images, which in my opinion is one of the highest compliments that can be given to a film composer's work.

I’ll just stop now. I’m assuming most have seen this – if you haven’t, you need to. You might not like it nearly as much as I do, but I guarantee that you will appreciate the beauty of what you see. Days of Heaven is poetry through pictures and it still amazes me that Malick would walk away from filmmaking for twenty years after it was released. Hey, maybe he was just following the old show biz adage: leave ‘em wanting more.

Other Contenders for 1978: I have trouble comparing documentaries or concert films with traditional movies, so I usually consider them separately. That being said, I should point out how much I love Martin Scorsese's The Last Waltz. The Band are one of my favorite groups, and along with the guest performances, it's legendary stuff that is captured in the film. This is the only one from this year that could have seriously contended in knocking off Days of Heaven, but as I said, it's hard for me to compare concert films to traditional motion pictures. The other movies of this year that stand out for me are: The Tree of Wooden Clogs (Ermanno Olmi), Coming Home (Hal Ashby), Violette (Claude Chabrol), Midnight Express (Alan Parker), and, although I think it would have benefited greatly from better editing, The Deer Hunter (Cimino).
Posted by Dave at 12:08 AM