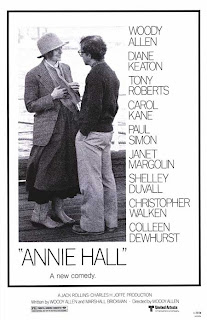 - "I don't want to move to a city where the only cultural advantage is being able to make a right turn on a red light."

I’ve always liked Woody Allen, but until I started going through a rough outline of selections for this countdown, I didn’t realize just how profound an impact a large number of his films have had on me. It was driven home to me by the fact that this 1977 Best Picture recipient, which many consider to be his finest achievement, could potentially not even be among my three or four favorites that he ever directed. I say “could potentially” because ranking favorite Woody films is a futile exercise for me, and one that has me constantly second-guessing and contradicting myself. For a man that has been so prolific, it is amazing how high quality his work has been – even his lesser efforts have aspects to be appreciated. Certainly not all of his films are masterpieces, but all of them can be enjoyed on some level.

I have to admit that I wavered somewhat on this pick. After completing the aforementioned rough outline, I thought to myself – “Can I actually have four Woody Allen movies in this countdown? Even I didn’t know I liked him that much…” Since doing more viewing and re-visiting of films, I’ll go ahead and give a preview in admitting that there likely will not be four movies from the Woodman in the countdown, but it still shows high highly I regard him at his best. The writing is just irresistible to me, the dry humor and sarcastic observations fitting perfectly with my own sense of humor. 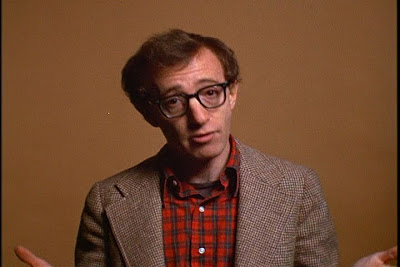 In my own assessment, Allen certainly made other films that were more visually impressive (Manhattan) or that were flat-out more philosophically complex (Crimes and Misdemeanors), but I contend that he never wrote a screenplay wittier than that of Annie Hall. The story follows the prototypical Woody Allen character, Alvy Singer, as he wanders through his life in search of a lasting romantic relationship. Alvy is a comedian who possesses significant neuroses – he is obsessed with such macabre things as dying and the Holocaust, and is convinced that nearly everyone who is not Jewish is anti-Semitic. Although he has already had two failed marriages, he almost immediately falls for Annie (Diane Keaton). The relationship between them follows a path similar to the rollercoaster that Alvy grew up under, with Annie’s insecurities constantly coming into conflict with Alvy’s paranoia.

Rather than simply tell the story of the relationship with Annie, the movie also creatively uses flashbacks to explain Alvy’s history with other women. We are shown how he came to meet his two ex-wives and the way that those relationships quickly deteriorated. The flashbacks are actually used quite unconventionally, with characters being able to be on-screen with their past selves and to converse with other random characters that suddenly appear in the frame. Without strong writing, such situations would come across as hokey, but Woody is skillful enough to ensure that viewers are laughing at what is taking place, thus deflecting any negative attention toward this breaking of conventions. He also manages to utilize things like cartoon animation and split-screens into the movie, but they are not as obtrusive as one would expect, and actually work quite well.

The flashbacks themselves are some of the most entertaining parts for me, as they are like a roadmap of Alvy’s life, weaving him through various periods of 20th century culture. We see him meet his first wife at a rally for Adlai Stevenson. He subsequently marries Allison (Carol Kane), but soon is unable to concentrate even on making love with her because he has become so preoccupied with the findings of the Warren Commission. His analysis of their findings, and his reasoning for why he believes that Lee Harvey Oswald could not have been the lone gunman, is a great comedy routine. It is hilarious as he begins to lump in anyone and everyone into the conspiracy, with Allison patronizingly playing along. It is one of my favorite scenes in the film, but it is just one of many individual sequences that sparkle throughout. In fact, the entire movie does feel a bit episodic, but is never disjointed to the point of feeling rambling. Woody’s writing ties everything together snugly. 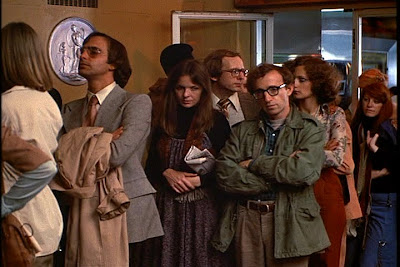 The chemistry between Allen and Keaton is what makes the “romantic” aspect of this so-labeled romantic comedy work. As good as they would be together two years later in Manhattan, to me this is their best performance working opposite each other. Whereas the coming together of their characters in Manhattan felt a bit manufactured to me, here it feels very natural. It feels very much like Woody has simply placed a camera in a room and given the audience a peak into the lives of two very neurotic personalities. Alvy and Annie are two people who have anxieties that expose themselves to the type of relationship that they find themselves in.

My favorite and most quotable lines are too numerous to repeat, so I’ll avoid that exercise (although I do have to admit that it would be fun to try and list my favorites!). I’ll just reinforce the fact that it is ultimately Woody’s screenplay that makes this such a great movie. The writing manages to cover everything from relationships, to the drug culture of the 70s, to those moving to Hollywood with big dreams, and so much more, and do so effortlessly. This movie would kick off an unbelievable streak of creativity and while it might not necessarily be my favorite of his films, it is one that is in regular rotation and that never ceases to be funny.

Other Contenders for 1977: Not a lot of great movies for me in 1977, but a number of films that I definitely like. I very nearly chose Robert Altman's 3 Women, an interesting entry in Altman's filmography. It is very similar to Persona, but not quite at the same level. The other close contender comes from the first female to enter the countdown, with the Soviet director Larisa Shepitko's The Ascent. It's a harrowing story of Soviet partisans resisting the Nazi invasion and is one that is not easily forgotten.

That is the extent of serious contenders for me in this year. Other films worth mentioning for me are: Killer of Sheep (Charles Burnett), Soldier of Orange (Paul Verhoeven) and, yes for the entertainment value, I'll throw in Star Wars (George Lucas).
Posted by Dave at 9:08 AM