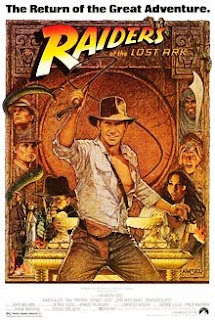 What better way to get back into this relentless advance through the history of cinema than with a film that reminds me of what was initially so appealing about movies – the fact that they are able to be downright fun. And so I return with a populist pick of a film that I know in many cases serves as a dividing line between the standard movie fan and hardcore cineastes. I like to think of myself as straddling both worlds of movie-watching, and as I’ve shown throughout the countdown, I have no hesitation in picking films like these so long as I find them to be among the best. I’ll be approaching this one similar to how I did with The Godfather films and Casablanca, assuming that anyone likely to read this is at least vaguely familiar with the stories, making plot synopsis unnecessary. So without further adieu… the march begins again!

In writing this piece for the return of the countdown I soon discovered how therapeutic the entire the series can be. How, you might ask, can writing a couple of pages on favorite movies serve to brighten my spirits? Well, in the case of this selection for 1981, revisiting an old warhorse was able to completely remove the horrible taste left in my mouth by last year’s “blockbuster” return of Indiana Jones to the big screen. While I never had exceptional hopes for the long-awaited fourth film, as a longtime fan of the series, I was at least hoping for something to rekindle some of the feelings I had as a kid when I first saw the original trilogy. Not only did The Kingdom of the Crystal Skulls come nowhere near that level of entertainment, but I found it so over-the-top that it actually left me questioning my fondness for Indiana Jones in general. I thought that perhaps I had overvalued the worth of the entire series, asking myself if maybe the other films would come across similarly now that I’ve branched out as a movie fan? I was so put off by the entire experience that I hadn’t revisited any of the series until now.

My feelings on the question that I began asking myself after can be summed up by the chorus to the classic Marvin Gaye and Tammi Terrell song: “Ain’t nothing like the real thing.” The Kingdom of the Crystal Skulls was nothing but a parody of the first three films. It tried hard – too hard – to match the adventure and thrills of Raiders of the Lost Ark, but lost sight of the key attributes that enable Raiders to continue to be cited among the best of the genre: the perfect pacing and actual character development. 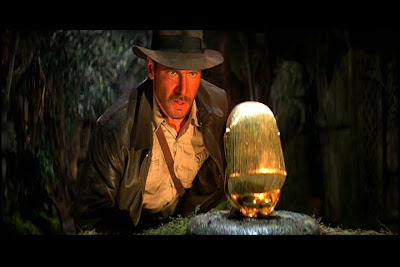 Don’t misunderstand, I’m not talking about character development on a Raging Bull-like scale. I’m not necessarily arguing that incredibly deep, profound emotions of characters are able to be felt by viewers. Rather, I’m referring to the fact that this world of the 1930s inhabited by Indiana Jones and his associates feels very much alive and expanded. In a very small span of time, the various characters that are introduced seem like old friends or well-studied enemies. Either way, they come across as actual people. People that have a history and possess true personalities that might not always be on display for everyone else. And even though we may not be explicitly told all of the details of such things, the characters feel developed enough to make us believe that we have a pretty good grasp of what those details might be. For example, after just two on-screen appearances by Indiana’s archenemy Belloq, he feels close to being a completely fleshed-out character. It becomes obvious that this is a man who likes to exude the image of being absolutely ruthless in pursuit of his archeological passions, but who many not be quite as coldblooded as he wishes others to believe. Eventually, his brief soirée with Marion at least partially bears this assessment out. Similarly, Sallah cannot be anything but a veteran Egyptian treasure hunter and somebody who all of the men in Indiana’s field would want to seek out. Marcus Brody has to be a fellow academic and longtime mentor of Indy’s. It seems obvious that he at one time was involved in work similar to Indy’s, or if not, that he at least aspired to have been a similar adventurer.

Basically, what it comes down to for me is that even though we are never told everyone’s background, it feels like we intuitively know it anyway. With the little bits of information that we are given, it is as if we can immediately fill in the remaining gaps on our own, and do so in a manner that feels like it must be correct. I think that a lot of this has to do with the other strength that I pointed out earlier: the pacing. Make no mistake, the original genesis of the film was the hope of George Lucas to create a world that would mirror the 40s serial series that he grew up loving, meaning that there would be exaggerated action sequences and good old fashioned struggles of good vs. evil. So it is first and foremost an action movie, full of the usual thrills and stunts. But the genius of Lawrence Kasdan’s screenplay is the he makes the respites between action sequences truly count. It is in these brief intervals that we are given the little morsels of information that allow us to piece together the back-story. Thus, you can quickly understand why such tension exists between Indy and Marion, purely on the basis of Marcus bringing up the relationship. In a few minutes time early in the film, Indy gives an armchair historian’s synopsis of the Ark of the Covenant and why it is so important to ensure that Hitler does not control it. Whereas in most action movies such spaces are there only to allow the viewer to quickly catch their breath before the next high-octane sequence, in Raiders they actually accomplish quite a bit more than this. Not only do they allow a quick rest from the rollercoaster ride, but they enhance the plot of the story and supply information that makes the adventure that much more mysterious. 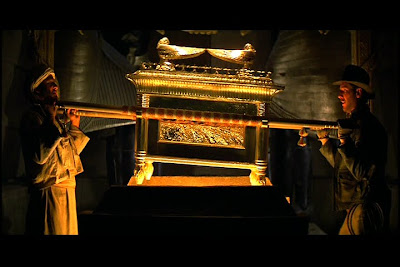 It must seem bizarre to have gone this deep into a piece about an Indiana Jones movie without even mentioning the name Harrison Ford, but it goes without saying that it’s impossible imaging anyone else wearing the trademark fedora and whirling the whip. But to go on expounding about why I adore this film, or about the performance of Ford, would be a retread of the usual praise given to the movie, which is something I’ll avoid. The one thing I will add, though, is that I’m unequivocal in my feeling that this is the best movie that George Lucas has ever been involved in – be it writing, directing, producing, whatever. It’s a definite thrill ride, incorporating the aspects of pulp novels and serials that make them so appealing. It contains the perfect combination of action, historical mysticism, along with the occult and supernatural.

I don’t know if there are those out there that attempt to read a deeper meaning or interpretation into the film, but there really is no need. I simply appreciate it as is. Is it an unabashed attempt at a bank-busting blockbuster? Sure it is. But when it’s this well done, there’s absolutely nothing wrong with that.

Other Contenders for 1981: I am actually a little stunned at how solid 1981 was as a whole. There are not a lot of movies that I would considered “perfect 10s” but there are a number of outstanding movies just a notch below that level. My MVP for the entire year has to be Lawrence Kasdan. Not only did he write the screenplay for Raiders, but he also wrote and directed the neo-noir thriller Body Heat. William Hurt and Kathleen Turner create much tension together and it would be my first runner-up for the year. I also have always been intrigued by Wolfgang Petersen’s WWII U-boat epic Das Boot. The feeling of claustrophobia that he is able to create is impressive. Brian De Palma is a director that is often hit or miss for me, but I think that Blow Out is very well done, if very derivative of Blow-Up.

Those would be the three closest favorites for me, but there are other wonderful films from this year that I would bring up: Prince of the City (Sidney Lumet), Reds (Warren Beatty), Lola (R.W. Fassbinder), and Man of Iron (Andrzej Wajda).
Posted by Dave at 12:05 AM