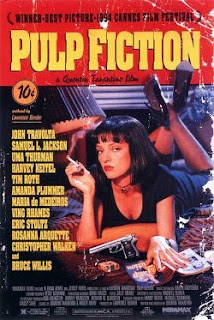 Realizing just how predictable and cliché a pick this is for 1994, I honestly made sure that I did due diligence and searched high and low for a film that could supplant it from the top spot. I got around to watching excellent movies from the likes of Kieslowski, Mikhalkov, and Yimou that I had not seen until getting them in specifically for the countdown. I revisited movies from Stone, Darabont, and Jackson that I always recognized as being outstanding films. I did my absolute best to see if I could avoid being as predictable as everyone following the countdown felt I would be… and I couldn’t. No matter what I watched, there was no getting around the fact that Pulp Fiction remains the best movie of 1994 that I have seen.

Although I was young when Quentin Tarantino burst onto the scene, I actually saw my Tarantino films in order. Having an older brother who adored Reservoir Dogs, I saw it while in middle school and was instantly a fan. But my love of that film sprung more from being intrigued by well made crime capers, not so much the writing and style of Tarantino. I just thought it played like a good thriller and left it at that. When I came to Pulp Fiction shortly after seeing Reservoir Dogs, I now realize that I was not in the least bit prepared for what I was about to watch. I was far from the film fanatic that I would become. I was completely confused and remember thinking, “what the hell is going on?” I don’t even know if I finished it that first time. So I returned to friends and acquaintances that had told me that Pulp Fiction was vastly superior to Reservoir Dogs and promptly informed them that they were delusional.

Something obviously must have happened between that moment over a decade ago and now, when I am choosing Pulp Fiction as my favorite film of the year. What was it that so radically altered my view? Honestly, I don’t know that I can pinpoint a single factor. I just know that there came a time a few years ago when I watched Pulp Fiction and everything just clicked. I realized that trying to follow it as a coherent crime drama was unimportant. I completely resisted the urge to try and read any meaning into the proceedings and simply laughed and enjoyed what I was watching. And most importantly, I think that by that time I had begun to develop into a “serious” movie fan. I was into many of the directors that influenced Tarantino, knew where he was getting many of his ideas and inspirations, and could appreciate this stylish homage that he created in riffing on the films that he loved. 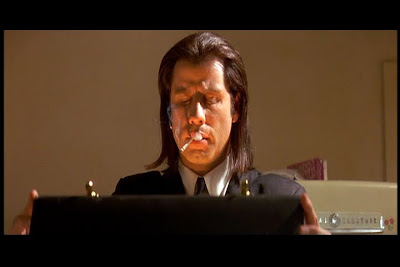 To attempt a full plot synopsis for a movie like this would be an exercise in futility. It’s told in non-linear fashion, with multiple plot lines weaved together and jumps both forward and backward in time at seemingly random moments. Completely guiding someone through the story in writing would probably be nothing but confusing. We simultaneously follow a duo of low-level gangsters, Vincent (John Travolta) and Jules, on a mission to recover a mysterious glowing suitcase; a fading boxer (Bruce Willis) who appears to be taking a dive in his final fight; a crime boss (Ving Rhames) gets double-crossed; the boss’s wife and her drug overdose, and many more. The situations that these characters are in are too much to believe can happen in such a short time span. But for me, the situations themselves are almost secondary. What carries the entire movie is the characters – they way they talk, how they interact with each other, how the audience seems to know so much about them even when not explicitly told every detail.

Evaluating Tarantino as a director isn’t something I usually engage in. He never gets in the way, so my focus is never on his work behind the camera. It’s his writing that I am always the most fascinated by and Tarantino deserves the credit for creating such memorable characters. This one is talky – the dialogue drives everything, but the speech is so fascinating that it’s the real appeal of the movie. The only way to describe the dialogue Tarantino writes is to look at it as an updated version of the hardboiled dialogue of noir masters like Raymond Chandler and Dashiell Hammett. It is cynical, biting, with one-liners and punch lines coming one on top of another. It is also raunchy, vulgar, and likely to insult every type of viewer at some point during the movie. But it’s Tarantino’s skill as a writer to make people feel comfortable in laughing at such offensive situations. Few people have the ability to make discussions of foot massages, being asked to take out the boss’s wife, the merits of pork products, or the cleaning of brain matter from the upholstery of a car seem so natural and important. It seems so normal for Jules and Vincent to be engrossed in a seemingly deep conversation over what they call the Big Mac in France. These feats are still impressive to me, after untold viewings. Akin to the flowing nature of the dialogue in Sweet Smell of Success, albeit in an R-rated version, this is one of those movies where you can simply close your eyes and listen to it. The speech is that entertaining. 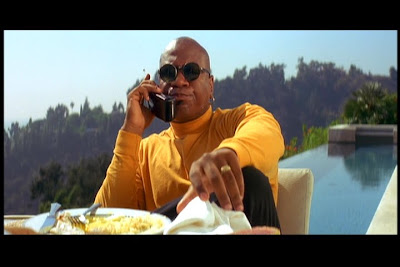 The most important thing that Tarantino ensures is that his dialogue fleshes out the personalities of all of his characters. We learn more about characters based upon what is discussed by other characters than what we are actually shown firsthand. Early in the film, just through the interaction of Jules and Vincent, the viewer quickly becomes familiar with Marsellus. We learn about Mia and the perils involved with interacting with her. Is all of the information true or necessarily correct? No, but that’s part of the appeal. The title is Pulp Fiction after all. This means that the viewer is bombarded with rumors, innuendo, street-level myths and variety of other stories and must try to make sense of it all. 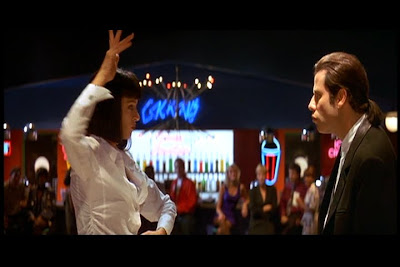 And while I have never been one that tries to read a lot of meaning into Pulp Fiction, because I think such analysis often goes overboard, I don’t think that it is a movie without a statement. To be completely honest, my main point in watching Pulp Fiction is always just to enjoy it, similar to how I expressed my love of a so-called “mindless” movie like Raiders of the Lost Ark. But I don’t know how you can watch Pulp Fiction and deny that how significant the idea of redemption is. It’s the one theme that I know fits in interpreting the movie. Whether it is Jules and the self-proclaimed miracle that takes place at the apartment or Ringo and Yolanda after Jules decides to take pity on them and give them a new start. Or, even Butch who is trying to end his life as a fighter and wannabe knockaround guy. Heck, if you want to stretch it even further, how about the ruthless crime boss Marsellus acknowledging the favor that Butch does for him in saving him from Maynard and Zed? In the words of Jules himself, there are a number of characters going through a “transitional period” throughout the film.

I also have to acknowledge that the overriding factor in my high opinion of the movie rests squarely on the performances of Travolta and Jackson as Vincent Vega and Jules Winfield. The other storylines are fascinating and at times provide some truly hilarious moments, but it is the travails of the two longtime partners that is the most appealing to me. This remains the measuring stick for all other Samuel L. Jackson performances and rightfully so. He manages to take a caricature of a hitman and turn him into a character that can be identified with. Perhaps one can’t identify with the line of work, but it’s easy to relate to one man who decides to make a complete about-face in the way that he is living his life. He and Travolta are like the Odd Couple, guys who will start arguing at the slightest provocation, but will always have the other's back. 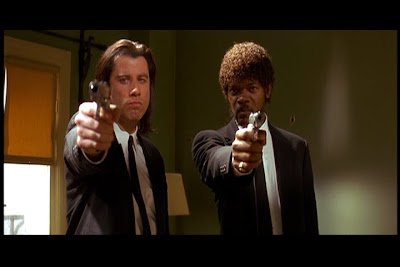 This is routinely cited as being the most influential film of the decade, and for better or worse I tend to agree. It has spawned far too many imitators, with writers who do not have nearly strong enough skills to carry a film with dialogue the way that Tarantino seems to be able to do with ease. Many have tried to create the same mix of one-liners, pop culture references, drug culture and violence that is contained here, but in nearly every case it simply comes across as the work of teenagers that never grew up. Perhaps that description does fit Tarantino personally, but his film remains a mature, vibrant piece of filmmaking. It’s obvious whenever I watch it that I am viewing the work of a man who truly enjoys what he is doing and has a passion for making films. And it’s hard not to at least respect that kind of passion.

Other Contenders for 1994: A number of solid films, but as I said, I found nothing that seriously threatened to knock Pulp Fiction from the top spot. There was a time when I would have easily cited Frank Darabont’s The Shawshank Redemption, and while I still find it to be a great film, it has lost some of its appeal to me. I also think that both of Krzysztof Kieslowski’s films of this year, White and Red, are quite good, although I do feel that Blue remains the best of the Three Colors trilogy. I recently saw Zhang Yimou’s To Live for the first time and think it is worth noting. This also goes for Nikita Mikhalkov’s Burnt by the Sun, which approaches that bittersweet label of “devastating.” And for all of its faults, I have always enjoyed Robert Zemeckis’ Forrest Gump.

One highly touted film from this year that I have never been a fan of is Wong Kar-wai’s Chungking Express. I remain baffled by it and remain completely uninterested whenever I try to revisit it and see what I am missing.
Posted by Dave at 12:05 AM