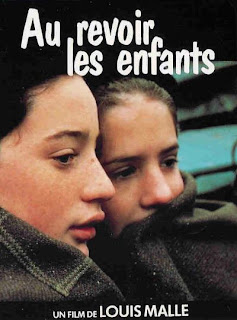 My top two movies of 1987 share a striking similarity which I believe is the reason that both are able to be such moving films. Both take subject matter that has been utilized by countless other films – one using the Holocaust, the other the experience of the Second World War in England – that some could view as a shortcut toward garnering an emotional response. After all, there is no denying that the “good war” image of World War II or the obvious evilness of the Holocaust automatically creates an emotional charge in an audience. Many lesser films have used this pre-packaged passion and simply gone through the motions in producing their final product. Neither Au Revoir les Enfants or Hope and Glory comes close to doing this. Instead, they do something that is simple yet at the same time brilliant: they tell basic stories that have been recounted numerous times before, but do so through the eyes of children.

I’m in no way claiming that this is a storytelling device that either Louis Malle or John Boorman magically created, it’s been done before. But what makes it so effective in both of their films is the way they do it. Both visually tell the story as a child would see it, but do it with absolute sincerity. It may be the viewpoint of an adolescent that is being shown, but there is nothing sugarcoated about it. Even accounting for the quirks and misunderstanding to be expected from children, the story is told almost matter-of-factly – whether that means comedy, heartache, fear, whatever it may be. We are able to watch a child try and survive and respond to the same situations that adults are expected to handle and the “entertainment” (I hesitate to use the word considering the subject matter, but I think it still fits) comes with seeing how a child copes with such shocking situations.

By looking at the title of this post, it’s obvious which of the two I chose in what was an extremely difficult decision. I hadn’t actually seen Boorman’s Hope and Glory until a few months ago when I watched it after seeing Sam taut it at WitD as being among the finest of the decade. He was right, of course, and I’ve since picked up a copy to have it in my collection. Still, there remains something about this Malle film that has haunted me since the first time I watched it. It sticks in the back of your mind the way that I suppose other excellent movies covering such topics should. I can still picture the final frames of the film, shot for shot, in my mind. 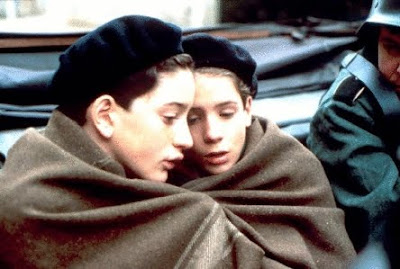 The story is apparently based on the personal experiences of a 12-year old Malle while he attended a Catholic boarding school in Nazi-occupied France. How much is an accurate accounting of his real-life experiences and how much is added to the screenplay I can’t say, but it’s unimportant. In film, the main character is Julien Quentin (Gaspard Manesse), a “momma’s boy” who despises being sent to the school. When he and his older brother return to the school after Christmas break, three new students are enrolled with them. The audience is soon made aware of an explosive secret: the three new students are Jews who under false names are being hidden from the Nazis by posing as Catholic schoolboys. One of the boys, Jean Bonnet (Raphael Feito), quickly develops a rivalry with Julien that is squashed as the two slowly become close friends. But Julien is smart enough to realize that there is something mysterious about his new pal – things such as his refusal to eat pork and his sitting up late at night and praying in Hebrew. Julien then begins snooping around to discover what exactly the answer is. While ransacking Jean Bonnet’s belongs, he uncovers the explosive secret: Jean Bonnet’s real name is Kippelstein and that he is in a fact a Jew being hidden among them.

While the friendship between the two boys grows closer, things predictably take a turn for the worse. A market for black-market school supplies is discovered, implicating numerous students and an employee of the school. The employee, a young cook named Joseph (Francois Negret), is fired and vows to get even. Aware of the secret of the priests hiding the Jewish students, Joseph alerts the Gestapo. When the soldiers descend upon the school, they begin going room to room looking for the boys. In the coming paragraphs there may be slight spoilers, but I don’t intend to give it all away for those that haven’t yet had the opportunity to see it.

I know that I keep returning to the fact that it is a kid telling the story, but it’s the most striking aspect of the film for me. Julien is obviously a bright boy, and while he might not understand the reasoning for what is happening, he is fully aware of what is at stake. Julien may not immediately know the difference between his family and his friend who is labeled a “Jew,” but he knows enough to keep that information hidden from everyone, even his own mother. And yet, even with this realization, it’s amazing to watch how he and his new friend are able to carry on with such childish pursuits. They can still enjoy games of capture the flag or sneaking into an abandoned room to goof around the piano. I don’t know how to sum up the profoundness of such sequences, but there is something to be said for the ability of a child to grasp the enormity of a situation while at the same time carrying on as if they maintain their innocence. 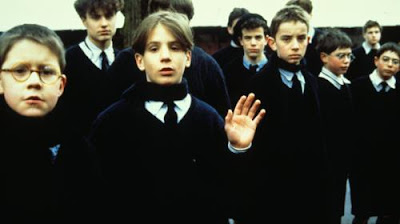 The immediacy of the Holocaust is also really driven home by the relationship between Julien and Jean Bonnet. The personal dimension of it all is on display. This is exemplified by the stunning conclusion. When we see Julien watching as his friend is being led out of the school by the Gestapo and observe the sadness from Julien, it reveals (at least to me) a key point that is often overshadowed by the sheer enormity of the Holocaust. When Julien is near tears and waving goodbye to Jean Bonnet, he is not saddened by thoughts of the horridness of the acts being committed against Jews as a whole. He is distraught because he is losing a friend. It’s that simple. The tears are flowing because he realizes his friend probably isn’t ever coming back.

Other Contenders for 1987: This actually an outstanding year, I think. No “perfect 10s” but so many excellent movies that I love to re-watch. My close runner-up has already been discussed. John Boorman’s Hope and Glory is great and also boasts a conclusion that is almost unmatched – but in a very different manner than in Au Revoir. I’ve brought it far too many times at Wonders in the Dark, but the “Thank you, Adolf!” line is one of the best in cinema.

When I first made a preliminary list of selections by each year, my original choice for this year was actually Woody Allen’s Radio Days. For whatever reason I obviously backed off that choice, but it remains one of my top three favorite Woody movies and is another excellent example of a child being the driving force of a film. My other favorites would be: The Last Emperor (Bernardo Bertolucci), Full Metal Jacket (Stanley Kubrick) Angel Heart (Alan Parker), Matewan (John Sayles), House of Games (David Mamet), and The Dead (John Huston). I haven’t had the opportunity to yet see Wim Wenders’ Wings of Desire but I look forward to seeing it when the Criterion DVD is released in November.
Posted by Dave at 1:52 AM