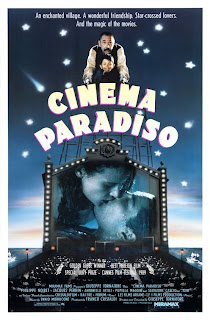 I’ve mentioned this story before, so it will be a repeat for most of the folks that frequent Wonders in the Dark, but I still have to bring it up again to show why I can acknowledge faults in this movie and still maintain such a strong connection to it. Similar to the curious bond that forms between Toto and Alfredo in this beloved Italian film, I had such a friendship when I was kid as well. Rather than a guy taking me under his wing and schooling me in cinema, in my case it dealt with golf. Similar to Alfredo, my friend was an older, gruff man who intimated most others who hung out at the golf course. But for whatever reason he took an interest in my game and essentially became my de facto personal coach. I became quite successful on the junior golf circuit in the area as a result, so I owed a lot to him. We were all the time going to play different courses, or the driving range, or other such jaunts. As I grew older though, and as golf was no longer the single interest in my life, we drifted apart a bit. By the time I had left for college, we had only spoken a handful of times in recent months. It wasn’t that there was any sort of falling out or anything, just both of us being busy with other things. There wasn’t much thought given to it. But about midway into my freshman year, I got a call telling me he was in the hospital. When I visited him he was unconscious and it was very touch and go. A week later, while back at school, I got a call telling me that he had passed away.

My reaction was similar to that of Toto’s when he gets the call about Alfredo. Just recalling the course of the friendship and feeling guilty about not having spoken to him in such a long time. It’s the ability to relate to this reaction that makes Cinema Paradiso such a memorable experience for me. 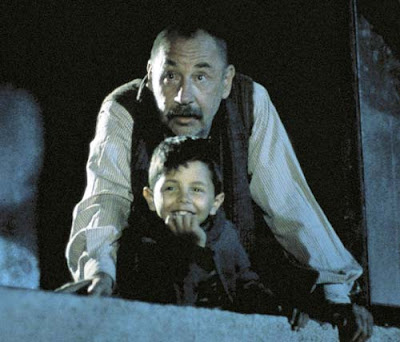 The story opens with a grown Salvatore Di Vita (Jacques Perrin) returning home and being told by a girlfriend that his mother called to say that Alfredo had died. Never having heard Salvatore mention the name, the girlfriend asks who he was. This then sends Salvatore back into memories of his childhood growing up in rural Sicily. It was in the tiny village of Giancaldo that a young Salvatore, known as Toto (Salvatore Cascio), discovered his passion in life: the cinema. Taking place shortly after the end of World War II, the young boy spends every possible moment at the local cinema. The Cinema Paradiso is the epicenter of life in the small town, where almost every resident gathers on the nights that new films are debuted.

The projectionist at the theater is the gruff, serious Alfredo (Philippe Noiret), who grudgingly takes Toto under his wing and shows him the ropes of running a projector. At first apprehensive about allowing the small boy in the control room with him, Alfredo soon begins to take pride as he watches the kid, not even tall enough to reach the controls, master the intricacies of the craft. This era of Toto’s life carries on in idyllic fashion until a terrible accident occurs at the theater. While projecting a film onto a nearby building so that everyone in the town square can enjoy it, the highly combustible film in the control room ignites and engulfs the room in flames. Toto manages to save Alfredo’s life, but not before enough damage is done to permanently end his career as a projectionist. As a result of a canister of film exploding in his face, Alfredo is left completely blind. 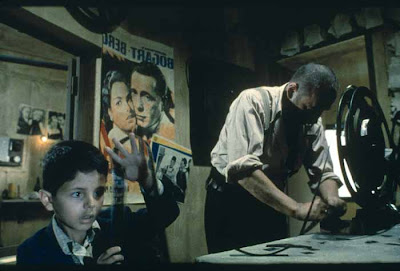 A local citizen then decides that the cinema must be rebuilt, but realizes that without Alfredo there is nobody else in the town to run the projector. It is then that he is alerted about Toto. Though still a boy, Toto is the only other person with the knowledge needed to run the projector and is thus hired on. The story then begins to increasingly jump forward, moving Toto into his adolescence and beyond. We see Toto continuing his role as the projectionist while growing into adulthood and dealing with the usual issues that accompany it – girls, relationships, even a stint in the military. We also witness Alfredo’s urging Salvatore to leave the island. As much as it pains the old man to say this to his young friend, he realizes that if Toto stays in Sicily he will never achieve his grand dreams. And so Alfredo tells him to go, and don’t even think about coming back – don’t even think about the island and do not even write or call him once he goes. It eventually emerges that Toto heeds this advice, moving to the mainland and using his passion for movies learned from Alfredo to launch a career as a successful director. Until learning of his friend’s death, Toto never so much as visited his homeland. But upon hear of Alfredo’s passing he decides that it is finally time to return.

The main charge against Cinema Paradiso from those that are not fans is that it is overly-sentimental and too maudlin for certain tastes. Even I admit that I sometimes wince at the Capra-like sentimentality, but even so it still feels like Tornatore is being completely up front about it. He’s not trying to trick someone into experiencing manufactured emotion. He is making a film that is an unashamed love letter to cinema. The sentimental sections are very close to how I would expect a young boy to experience and interpret them. Is it sentimental? Yes, but I think that’s precisely the point. It’s a eulogy to the cinema and the powerful role that films are able to play in people’s lives.

There are so many things to like about the film in terms of characters and performances. Salvatore Cascio as the young Toto delivers one of the best child actor performances that I’ve ever seen. The kid is endearing, playing a young boy who so badly wants to grow up as quickly as possible. I also love how Tornatore uses the various sequences at the movie theater to introduce the eccentric citizens of Giancaldo. There are secretive love affairs, initiated by a local prostitute, launched while everyone else is watching the movie. There is the man who is a regular patron, but goes to the theater and always falls asleep. The kids invariably are there are pick at and annoy him, which they do at every opportunity. Or the man that comes just to sit in the balcony and spit on those sitting below him. It seems that literally everyone in the town makes an appearance.

The movie also has the distinction of containing two of what I like to call “goosebump scenes.” By this, I mean scenes that are spine-tingling in how great they are. The first is when Alfredo decides to turn the projector out of a window to broadcast a movie onto the town square. It just seems like such a wonderful notion, the idea of an entire community coming together in the center of the town enjoying a comedy on the side of a building. Of course, this pleasant moment is disrupted by a terrible tragedy, but before that occurs it is quite a scene. And then, of course, is the finale. It’s one of my favorite endings of all time. I know that I always say that I don’t want to give things away to those that haven’t seen it and that is especially so in this case – I don’t want to rob someone of seeing it for the first time without any idea about what is to come. All I will say is that it is a perfect cap to the friendship of Toto and Alfredo.

Is this is a perfect movie? I personally don’t think that it is, and as I said even I occasionally am not in the proper mood for it. But its strengths more than cover any faults that one may find in it. Plus, with the personal connection that I am able to make with it, this is a movie that will always have special significance for me.

Other Contenders for 1988: Not a great year for me, really. Some solid films, but outside of Cinema Paradiso nothing that really jumps out at me. The other films that I would use to round out a “best of the year” list would be: The Vanishing (George Sluzier), Dangerous Liaisons (Stephen Frears), The Last Temptation of Christ (Martin Scorsese), Midnight Run (Martin Brest), and Eight Men Out (John Sayles).

And while I wouldn’t propose it for a countdown like this, if we’re going to talk about guilty pleasures, I have had a love for the Brat Pack western Young Guns since I was a kid. Call me nuts, but my lifelong fascination with Billy the Kid meant that I was the perfect mark for something like this. I make no apologies for it – and you all know that you have such guilty pleasures among your favorites as well! :)
Posted by Dave at 8:05 AM