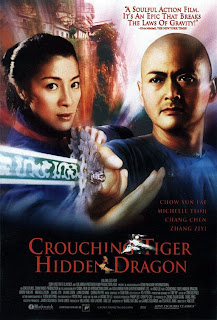 - “A sword by itself rules nothing… It comes alive only through skillful manipulation.”

I have to admit to cringing a bit when making this pick, just because I hate the feeling of looking like someone who falls prey to the trendiest selections. I say this because my guess is – although I have nothing official to base this on – that Crouching Tiger, Hidden Dragon is a film that western neophytes like me adore but that hardcore Chinese and wuxia cinema followers probably view as little more than an imitation. I could be completely wrong, but I’m willing to bet that this is the case with a lot of folks. For something I’m more familiar with, it’s akin to whenever I meet someone who says, “Oh yeah, I’m a big Van Morrison fan too,” and then proceeds to declare “Brown Eyed Girl” to be his best song. The antennas immediately go up and I quickly know that I’m probably not dealing with someone as fanatical as me. I assume the same thing happens when a fan of Chinese cinema or martial arts films hears someone like me citing Crouching Tiger, Hidden Dragon as a favorite.

Maybe I’m wrong, which would be great. But if this is how I look in making this pick… well, there’s nothing I can do about it. I know so little about Hong Kong or Chinese cinema that I couldn’t even carry on a meaningful conversation about it. And my exposure to wuxia is even more inadequate – this is one of only a few films I’ve ever seen that would qualify. Still, what I am sure of is that Crouching Tiger, Hidden Dragon remains one of the best combinations of action and drama that I’ve come across. 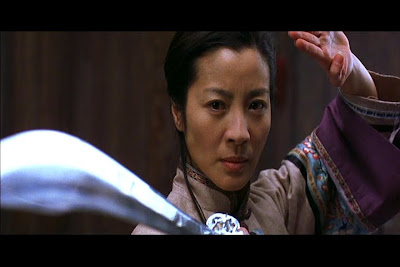 At least for me, the story was not initially the easiest to follow. There are flashbacks and memories that characters unexpectedly engage in, which can occasionally confuse an unsuspecting viewer regarding time periods (that, or I’m just a bit slow and didn’t follow things as well as other people!). But at its most basic level, there is one key plotline that stretches throughout the entire film, with two romances playing a major part in everything that happens. The focus of the story is the relationship between Li Mu Bai (Chow Yun Fat), the most revered warrior in all of China, and his love for Yu Shu Lien (Michelle Yeoh). Li Mu Bai is a Wudang master, which as best as I can make out, means that he is among an elite group of warriors that have been trained in highly-secretive tactics and techniques that separate him from nearly all other opponents. Since Shu Lien is a woman, she has never been admitted into the Wudang fraternity, but she too is regarded as being among the ablest fighters in China. The obvious chemistry between the two has never been acted upon, however, because Li Mu Bai is committed to avenging the death of his master, who fell at the hands of the elusive Jade Fox (Cheng Pei-Pei). So long as he continues as a Wudang warrior, he cannot settle down into domestic bliss with Shu Lien.

Resigning himself to failing in this task, Li Mu Bai decides to end his days searching for Jade Fox and instead attempt to settle down. As a sign of his pledge, he surrenders his famous sword, the Green Destiny, and entrusts it to Shu Lein to deliver the sword to a mutual friend. Shu Lein does this, taking it to Peking, where she quickly finds herself embroiled in the political squabbles of the Qing Dynasty. While there, she meets the princess Jen (Ziyi Zhang), an innocent young girl who appears to exhibit many qualities of a great swordswoman and warrior. When the Green Destiny is stolen during its first night in Peking, Shu Lein begins to suspect that Jen is somehow involved. She also comes to believe that the infamous Jade Fox has played a role. Jen’s life is also further complicated by her love of a peasant outlaw, Dark Cloud (Chen Chagn), whom she falls in love with after essentially being taken captive by him while traveling in remote outposts of China.

OK, a bare bones synopsis just to get it out of the way. It’s basic I know, and doesn’t come close to reflecting the true complexity of the movie. The striking thing to me is that for a movie that is only about two hours long, it feels like it has an epic scope. It comes across as a sweeping story that covers a lot of ground in a short period of time. Perhaps it’s the setting of it – being set during a historic period of Chinese history probably contributes to this. In fact, while watching it again, I immediately began to think of how much like American westerns this story was. The subplot between Jen and Dark Cloud is like something straight out of The Searchers. Maybe this is an odd parallel to make, but those thoughts were certainly running through my mind. 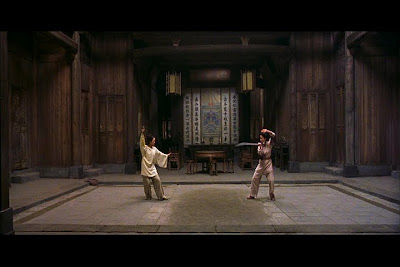 Normally, movies of this kind are not ones I’m likely to enjoy. There are not many martial arts or combat films that I care for – usually all of the fighting just seems so pointless and drawn out to me, that I quickly lose interest in sequences that are intended to serve as centerpieces. What sets Crouching Tiger apart for me is the fact that not only did I not lose interest in these sections, but I found them mesmerizing. The fight scenes are like watching a dance routine in a classic musical. Or, for something I’m more familiar with, it’s like watching an extraordinary boxer working the mitts. You know that the moves are partially, if not fully, choreographed. Every step, jump or punch has been thought out beforehand. But the great ones are able to make such compositions appear completely natural. Thus, Fred Astaire looks at ease going through his dance steps. Someone like Floyd Mayweather looks like he is playing off of every move made by his trainer. And in this film, the actors look like they are just reacting to the moves of their opponents. This is what impresses me most about these scenes: the fact that everything is so smooth. Yes, there is a mystical quality to everything that is happening – after all, the characters are floating and stopping darts in midair – but it all looks so natural and graceful.

Ang Lee, someone who I know primarily through subdued period pieces like Sense and Sensibility, shows an incredible knack in filming these fight sequences. He uses inventive techniques throughout. Rather than simply showing close-ups of the combatants trading blows, he occasionally does things like switching to overhead views that give an aerial view of the entire sequence. It sounds minor, but such effects work very well. Similarly, some of the settings for the battles are memorable – the duel between Li Mu Bai and Jen in the trees (apparently done without any CGI) is one that stands out. Really, the photography and camera work in the entire film is stunning, not just in the action sequences. The architecture, the sprawling Chinese desert, the mist-covered mountains and trees all stand out. 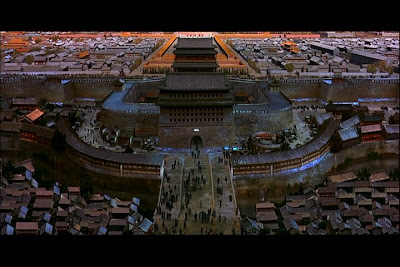 This is not a perfect movie by any stretch, and I can point toward the relationship between Jen and Dark Cloud as being handled a bit clumsily at times. Their first romantic scene together happens very suddenly and feels awkward. Some of this middle flashback subplot could have been trimmed without losing much in the overall tale. But what ultimately holds everything together is the two female leads of Michelle Yeoh and Ziyi Zhang. The back and forth friendship that develops between them is the dramatic appeal for me. Couple this with the outstanding actions sequences and Crouching Tiger, Hidden Dragon the first martial arts film that I can cite as a favorite. It’s trendy as hell to say this, but I can’t help it.

Other Contenders for 2000: A solid, if not spectacular year for me. There are a number of films that I really like, although not that I would likely refer to as “great.” I have always had a soft spot for Cameron Crowe’s Almost Famous, as I am addicted to the era of music that Crowe pays homage to in his screenplay. I also am a big funny of the Coen Brothers comedy O Brother, Where Art Thou?. It’s not quite top tier Coens, but it’s close. While not a movie that I am likely to watch on a regular basis, I can’t deny how well made Edward Yang’s Yi Yi is. A truly touching movie, but it can be draining. I have also always been fascinated by Christopher Nolan’s unique Memento. It might lose a little bit on repeated viewings, but it remains fascinating. And, being the sucker for historical epics that I am, I have always been fond of Ridley Scott’s Gladiator. It’s certainly a flawed movie, but I’m always taken in by the ancient Roman atmosphere of it all. Kar Wai Wong’s In the Mood for Love is a movie that I can appreciate for its stunning visuals, but is another instance of a Wong movie leaving me uninterested story-wise.
Posted by Dave at 12:05 AM