2006: The Lives of Others (Florian Henckel von Donnersmarck) 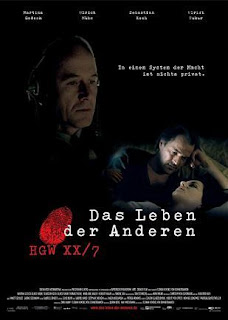 For the second time in three years, I turn to Germany for my top film. Not since the first two years of the countdown (all the way back in May!), when I chose The Blue Angel and M for 1930 and ’31, have films from Deutschland popped up so close together. Oddly enough, both of these films from the current decade deal with dark periods in German history. As was covered in the review of Downfall, the final days of Hitler’s Third Reich are played out at a frenetic, almost real-time pace in Oliver Hirschbiegel’s stellar work. The formula for writer-director Florian Henckel von Donnersmarck’s debut film is quite different. Rather than bombarding the viewer with the immediacy of a dire situation, he crafts a story that slowly builds tension, creeping up on climaxes that are bubbling over with anxiety.

The setting is East Germany in 1984, a time when socialists still ruled the nation, but when protesters and intellectuals are routinely speaking out against the repressive regime. Maintaining control of the ruling elite is the secret police of the East German state, the dreaded Ministry for State Security, or “Stasi.” This is an organization that specialized in covert operations utilized to spy on and uncover enemies of the state. The extent of the operations of the organization is staggering even now – 68,000 full-time employees, as well as utilizing nearly 300,000 part-time workers and operatives over the course of its existence. In addition, the Stasi cultivated an army of informants to clandestinely report on the activities of neighbors, co-workers, relatives, and anyone else that could be under scrutiny as a “class enemy.” 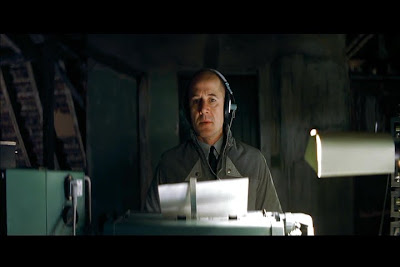 One of the Stasi’s most successful employees is Gerd Wiesler (Ulrich Mühe), an expert in the disciplines of interrogations and covert intelligence gathering. So efficient is Wiesler that he is in charge of instructing new recruits at the Stasi academy in the art of extracting confessions from suspects. The methods used to obtain such confessions – sleep deprivation, constant questioning, threats toward family members – would make the admissions dubious to most impartial observers, but Wiesler views them as foolproof tactics. A former classmate and current superior of Wiesler, Lt. Col. Anton Grubitz (Ulrich Tukur) comes to Wiesler in order to initiate surveillance on the most successful playwright in East Germany, Georg Dreyman (Sebastian Koch). On the surface, Dreyman looks like a loyal socialist, but party higher-ups begin to suspect that he, like many other artists, may secretly harbor anti-GRD feelings. Thus, Grubitz and Party Minister Bruno Hempf (Thomas Thieme) decide that he needs to be placed under surveillance. Grubitz approaches Wiesler, having him set up the operation.

Wiesler wires Dreyman’s apartment and constructs a control room on the top floor. As he spies on them, the reasoning for putting Dreyman under surveillance slowly begins to emerge. When Wiesler spots Dreyman’s girlfriend Christa-Maria (Martina Gedeck) with Minister Hempf, he begins to understand the goal of the operation is not preserving the security of the state. Over the course of his work, Wiesler gradually begins to relate to Dreyman and Christa-Maria. Almost as if he is living vicariously through the couple, Wiesler’s commitment to the cause begins to wane. Taking chances that he would not normally have considered, Wiesler actually begins to leave out key information from the reports that he submits to Grubitz. The result is that no incriminating evidence is found against Dreyman, which infuriates Hempf. 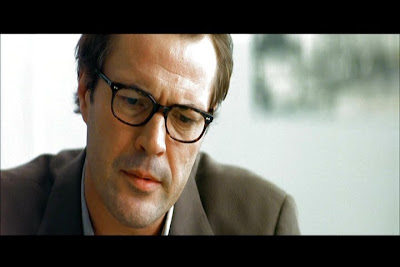 Part of the true reason that no incriminating evidence is found to smear Dreyman is that initially he is not actually a subversive. Although many of his peers in the theater world are dissidents, Dreyman is almost apolitical. If he is not an outright supporter of the GDR, then he at least is someone who has made peace with the way the system is. While Wiesler is undoubtedly the main character of the film, the most interesting aspect of the story to me is the development of Dreyman. When he is put under surveillance, it becomes obvious that he has no desire to be a part of the resistance. His only goal is to be able to continue to be able to write, which is guaranteed by staying out of the rough and tumble business of politics in the GDR. It is only once surveillance has begun on him that he even slightly ventures into publishing something political.

I am not going to go much further in terms of plot, because although I’m guessing that a lot of folks have seen this, but it’s one that needs to be experienced with at least some degree of freshness the first time around. So, to those who still haven’t had the pleasure, I won’t reveal too much. I do, though, want to comment on the conclusion and say that I love it. Rather than wrapping things up with the most obvious, pat ending that anyone could see coming, von Donnersmarck keeps it understated. It's feel good not in an overly sentimental kind of way, but rather very modestly. I hate to sound schmaltzy myself, but this is a movie that gives a reassuring assessment of the ability of one person to decide to do the right thing, regardless of the outside pressure. 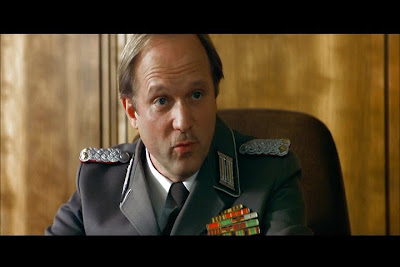 The performances are all around solid. Mühe as Wiesler is the prototypical dedicated, methodical bureaucrat. Koch plays Dreyman as the writer who will do anything for his art. The best performance probably comes from Tukur as Anton Grubitz, a man who fashions himself as dedicated to the tenets of the state, but who’s only true ambition is personal career advancement. The true star of the entire film is von Donnersmarck. The script which he penned is tight, using very deliberate pacing and style to make the climaxes unbelievably thrilling. Long sections of the film will seem to repeat snippets of dialogue and situations, but they only lull the viewer into a sense of familiarity that is quickly shattered when tension-filled scenes pop up. As a director making his debut, von Donnersmarck also displays incredible control. While not exactly the most scientific scale to judge such things, the movie looks exactly as a westerner like myself has been led to believe cities behind the Iron Curtain would look. Everything is drab and dull, with each building looking exactly like the next. The coloring of the sets and scenery is equally bland, creating an air of monotony that accentuates the pacing of the story.

Perhaps part of me being drawn to this film is that I see a lot of elements from other all-time favorites. Every time that I watch it, I am reminded of a classic like Bernardo Bertolucci’s The Conformist, another tale of a man becoming disillusioned in an authoritarian state. It’s also impossible not to relate it to one of Francis Ford Coppola’s finest, The Conversation, which touches on the way that surveillance can affect both the watcher and the watched. I don’t think that The Lives of Others is quite at the same level as these two films, but few are. It is an amazing achievement as a debut film and one that is poignant enough to stay with you well after you finish it.

Other Contenders for 2006: I came very, very close to going with Paul Greengrass’ United 93. I think it’s a remarkable achievement, and one which I originally questioned coming so soon after September 11. But it’s handled well and the intensity that is able to be created in another real-time like production is impressive. Clint Eastwood also released one excellent and one OK film in 2006. Screenwriter Paul “I have a message and I’m going to pound it into your head” Haggis gets into the way too much in Flags of Our Fathers. Letters from Iwo Jima is certainly the superior of the two and ranks high on any Eastwood list. I am happy that The Departed finally got Marty Scorsese his long-deserved Oscars, but it’s a movie that I seem to like less the more that I watch it. I still like it, but where I once felt it to be among Scorsese’s best, I no longer think that is the case. Still, it remains a top film for 2006. A movie from this year that continues to keep me puzzled is Darren Aronofsky’s The Fountain. It might be one of the best movies I’ve seen or it might be a dud – and I honestly can’t decide which one I feel is the case! It’s one that I probably need to continue to revisit. Others I have to acknowledge: Apocalypto (Mel Gibson), Pan’s Labyrinth (Guillermo del Toro), Blood Diamond (Edward Zwick), and Inside Man (Spike Lee).
Posted by Dave at 12:05 AM