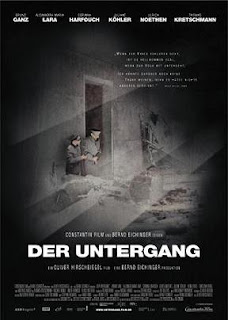 I have a feeling that this one could divide readers here at the blog nearly as widely is it did the country of Germany upon its release. As someone who is obsessed with history and loves nothing more than a solidly-constructed historical drama, perhaps I am the perfect mark for such a film. There has always been an air of mystery surrounding the closing of the Third Reich, specifically concerning the final days of Adolf Hitler. In all honesty, I knew very little about the frenetic circumstances of this period, outside of the usual random trivia and general World War II history. So it is little surprise that I found it engrossing to be given a first-person view of the disintegration of both an evil empire and an equally evil man.

The story recounts the final twelve days in the life of Adolf Hitler (Bruno Ganz), watching him spend this time with a large entourage in an underground bunker. It is April 1945 and the Third Reich is on its last legs – the Americans and British are advancing from the West, while the Russians are closing in even quicker from the East. With constant bombing and artillery peppering the city, Berlin is a smoldering mess, with all buildings and houses being turned to rubble. The majority of the story takes place in the subterranean Fuhrerbunker, constructed underneath buildings in the government district of Berlin. Entry into this claustrophobic world is provided by following the character of Traudl Junge (Alexandra Maria Lara), Hitler’s personal secretary. She is hired by Hitler in the early 1940s and by this point in the war has obviously developed a sense of loyalty toward her boss. When much of the staff decides to leave Berlin before the city is overrun, Traudl declares that she will stick by Hitler until the end.

What the audience is able to witness in this claustrophobic world is the breakdown of a man who, in his own words in the film, singlehandedly conquered Europe. His generals and advisors recognize that there is no stopping the Allies at this point – Berlin is going to fall and it is going to happen very soon. Whether Hitler understands this is up for debate. At certain times he begins planning for his suicide, as if he has come to terms with the fact that the war is lost. At others, he plans counterattacks for units that don’t exist or plots strategies to prolong a war that moments ago he had declared he was done fighting. Since none of his generals have the courage to tell him the truth, Hitler operates in a pseudo-dream world in which he is never certain whether he should continue fighting or simply end it all. Along the way, a veritable who’s who of historical Nazi characters is seen. Eva Braun, Hitler’s longtime girlfriend whom he marries just before both commit suicide. Joseph Goebbels, a loyal Nazi until the end. Goebbels’ wife Marga, who performs acts that are enough to make anyone sick at their stomach. Heinrich Himmler, the head of the SS who begins secretly planning to negotiate with the Allies in order to secure advantageous terms for himself and other high ranking party members. Albert Speer, the architect turned war production chief.

Director Oliver Hirschbiegel’s attempt to tell this compelling story was not received warmly by everyone in his home country. As is understandably the case, depictions of this period in German history have remained controversial ever since the war ended. The government has tightly regulated the ability of artists and the media to create portrayals of Hitler and the Nazi party. Although these sentiments may not have been as strong as in the initial post-war years, these unofficial (and in some cases, official) prohibitions remained applicable even in 2003. In making Downfall, Hirschbiegel directly challenged one of the most significant of these remaining restrictions – depicting a realistic, German-speaking Adolf Hitler as the lead character in a film. As if this would not be controversial enough, the way in which Hitler is portrayed would draw even greater fury. 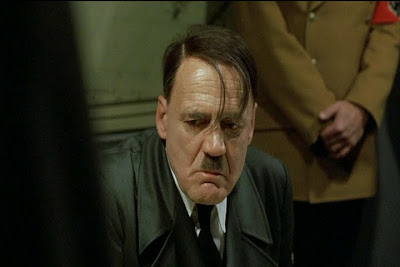 Evidently, much of Germany was not yet prepared for a film to show the psychopathic leader as someone capable of being every bit as human as the average person. The furor arose over the personal approach taken in telling the story of Hitler’s final days. To be certain, there are plenty of maniacal moments – bone-chilling sequences in which he casually discusses executions and deaths of his own German citizens. But there are also moments when the mass murder is portrayed as caring and at times quite charming.

Where I come down in assessing the film is obvious. I choose it as my number one for the year, so these are obviously not issues that affected my appreciation of it. But I can appreciate where the reaction of a large section of the German population was coming from. Bruno Ganz’s chilling portrayal of Hitler at times does border on showing him as a sympathetic figure. This is not the prototypical depiction of Hitler, a madman who does nothing but plot genocide and war crimes. In this film he is also seen patting young German boys on the head, receiving children like a favorite uncle, or showing compassion for the females stuck with him under the Chancellery. It is understandable that some might see this as unjustly creating sympathy for Hitler, depicting his final twelve days in the bunker as some kind of heroic trip toward martyrdom. For me, though, the fleshing out of Adolf Hitler on a personal level only made him even more disturbing. The fact that someone this charismatic could move from patting children on the head one moment, to in the next instant condemning the entire civilian population of Berlin to death is shocking. It is an unnerving and powerful juxtaposition. The other striking dynamic to the film is Hirschbiegel’s portrayal of those around Hitler. It is shocking how even generals who know that the war is lost, refuse to turn their back on the man that has lead them to this point of destruction. There is a scene in the film when Hitler is told that an army led by General Steiner will not be able to attack as he ordered. Hitler then declares that the Army has failed him and that he is finished with it all – in so many words, he tells them that they are on their own from there on out. And even then, a number of generals refuse to abandon the man.

The performance from Ganz is stunning. Even if one is turned off by the subject matter of the film, or completely disagrees with the method of storytelling, I don’t think anyone can deny the level of Ganz’s achievement. Aside from the similarities in physical appearance, Ganz also spent time studying a rare audio recording of Hitler in order to mimic his actual voice and speech patterns. This is not an easy performance to pull off as there is a risk of being too over the top, of playing Hitler as a caricature of the arm-waving, spittle-flying orator at the podium that everyone pictures when his name is mentioned. Ganz embraces this image at times, but adds enough nuances to keep from approaching campy territory. And Ganz’s is not the only standout role. If Carinna Harfouch as Magda Goebbels isn’t enough to horrify you, then I don’t know what will. The way that she justifies giving her children cyanide is enough to make even the most coldhearted viewer squirm. 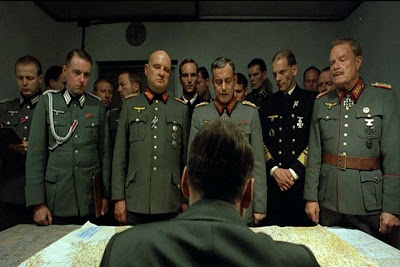 Outside of Ganz, what ultimately makes the film work for me is the style adopted by Hirschbiegel. Even though we know that the story is unfolding over the course of nearly two weeks, the action has a real-time feel to it. So many things are taking place in such a short period of time, and in such a confined area, and Hirschbiegel never lets the audience forget it. Cuts between characters and scenes – including some sequences taking place on the war-torn streets of Berlin – come quickly and one on top of the other, building tension for a story that has an ending that everyone already knows.

I’ll be interested to see how others assess this one. I find it unsettling in content, but unbelievably compelling in its execution.

Other Contenders for 2004: This was a toss up for me between my actual choice and Martin Scorsese’s The Aviator. I know that I rate The Aviator a bit higher than most – I actually rank it as my #3 or #4 favorite Scorsese film – but we all know that personal taste is going to play a role at various points in this countdown. It’s interesting to see Marty use such a bright, slick production style. Outside of these two at the top, other favorites for the year include: Collateral (Michael Mann), Million Dollar Baby (Clint Eastwood), Sideways (Alexander Payne), Bad Education (Pedro Almodovar), and Maria Full of Grace (Joshua Marston).

Not exactly a banner year, in my estimation, but solid.
Posted by Dave at 12:05 AM