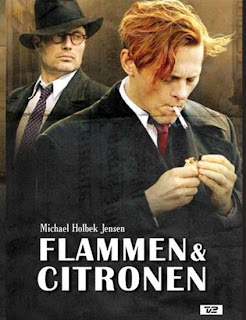 Any selections I make for 2008 and 2009 come with major caveats – I simply haven’t seen everything that I probably should before making a pick. This pertains especially for 2009. I still go to the movies when I can, but I’m one who tends to wait and watch films on DVD in the home theater versus going to the cinema as much as I should. What that means, though, is that I end up being a few months behind on keeping up on newer releases. This issue was compounded even more this year, as when I would normally have been catching up on anything I missed in ’08 I was instead engaged in this wonderful odyssey that has been the Year’s Best Countdown. With all that being said, I think that I’m able to make a solid selection for 2008, even if I haven’t necessarily seen every possible contender.

And I’m going with something of an obscure pick for the year. I’ll be interested to see how many people have seen this Danish film. It received all-around positive reviews, but it only saw release in select theaters and cities. There is one person who deserves sole credit for my viewing of this film – the man who has been here at Goodfella’s since day one, Sam Juliano. Sam saw this one in theaters over the summer and, knowing my tastes for noir and historical thrillers, recommended it as a film that he felt I would enjoy. His high praise intrigued me, but living nowhere near an arthouse theater that would screen a film like this, I wasn’t going to hold my breath. I thought I would simply have wait and hope that it would be released on DVD in the states sometime in the near future. I did, however, discover that IFC had acquired the rights to distribute it in the United States. Knowing that they often offered contemporary films through their On Demand cable service, I decided to give it a shot. Fortunately for me, it was there. I ordered and was once again reminded how many top-notch films are released each year throughout the world that I don’t have the slightest inkling of. It was just good fortune that Sam saw it and recommended it. 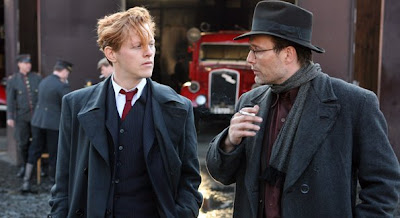 Set in occupied Denmark in 1944, the story is inspired by the real-life exploits of two resistance fighters who operated as a hit squad against collaborating countrymen and the occasional Gestapo officer. The pair is known as Flammen (Flame) and Citronen (Citron) which roughly translates as “Flame” and “Lemon” in English. Flame’s (Thure Lindhart) nickname is derived from the fiery red hair that he boldly refuses to cover when he performs a hit. Citron (Mads Mikkelesen) gets his name due to his having worked at the Citroën car factory in Copenhagen before joining the resistance. They make an unlikely duo – Flame is young and brash, fully confident in his abilities to complete any assignment given him. Citron, on the other hand, is reserved, fidgety, always on edge. Both try to live by the code of only killing Danish collaborators, not having a desire to go for German soldiers. Their leader Askel Winther (Peter Mygind), however, is not as principled. He rises to lead the Danish resistance because of supposed connections to the Allies in London, but it is a tenuous connection at best. As Flame and Citron realize that they are now being sent to hunt Nazis and ex-German officers, they begin to question the motives of their leader. Is Winther working for his country or trying to play out personal vendettas? The intrigue is further heightened when a mysterious femme fatale (Stine Stengade) interjects herself into the machinations of the resistance group.

Although set in World War II Europe, it is just as much a noir as a war film. The characters are very much out of the traditional noir mold, finding themselves in circumstances they never imagined being a part of. And because of these situations they are in, they are prodded into doing things that they originally swore they would not do. For Flame, this means continually bending his rules on who he would hunt. Originally it was just men of Denmark who collaborated with Nazis. Then he agreed to kill Germans. This then leads to him reluctantly murdering a woman, which in turn leads to a job where a child is killed. These are things Flame never intended to be a part of, but he is in so deep with the resistance movement he feels like he has to follow through. Similar developments occur to Citron, who tries to shield his wife and daughter from the dangerous world he operates in. Citron sickens himself when he is reduced to robbing a store run by a Nazi businessman in order to feed his family. Both Flame and Citron are unquestionably the protagonists of the film, but in true noir fashion, they are not the crystal clean good guys in white hats. The moral ambiguity of their actions is obvious. If the characters themselves grapple with their roles as assassins, then it even makes the viewer question if what they are doing is justified because of the war. 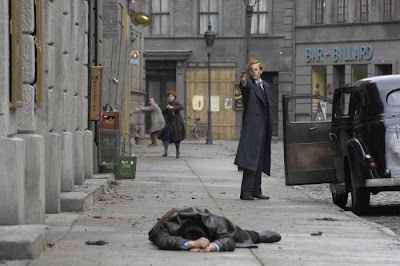 It’s not just the characters that have the classic noir or gangster vibe. Director Ole Christian Madsen and his crew bring the occupied city of Copenhagen to life similar to how American masters like Robert Siodmak and Michael Curtiz were able to do with Los Angeles and New York. Perhaps an even better comparison would be with other visually spectacular neo-noirs like L.A. Confidential. But even that comparison isn’t perfect, as Flame & Citron doesn’t feel anywhere near as slick as did L.A. Confidential. Everything is in color, but outside of the title character’s flaming red hair, the tones are muted to create the properly overcast atmosphere. At the time of its release, this was the most expensive Danish film ever made and it’s obvious that a bulk of the funding went into recreating the Copenhagen of 1944. Everything feels legit – the streets, the storefronts, the clothes, the cars, the guns. There is a horrific beauty to seeing the city in this period.

There are some virtuoso moments in the film, particularly from the standpoint of directing and editing. The opening fifteen minutes the film is spectacular, using a mixture of archival wartime recordings and original scenes. Playing newsreel footage of the Nazi Army rolling into Denmark, Flame narrates with a series of questions addressed to the collaborators that he targets. “Do you remember April 9th?” he asks, answering quickly with, “I think you do.” He continues with voiceover narration and thoughts as he and his partner travel across town with the day’s assignments. Along the way, Citron too takes the time to reflect on what has led him to this point, reminiscing about how he watched the Nazi stormtroopers march through the center of the city. The sight upset him so badly that he literally became sick at his stomach. All this leads into another montage of historical footage and newly produced shots to quickly enlighten the uninformed viewer. It’s an incredible opening sequence, on par with the kind of editing seen in Oliver Stone’s JFK.

The most obvious influence is also one that has been acknowledged by Madsen – Jean-Pierre Melville’s Army of Shadows. It can be excused if it ends up being a slightly inferior offspring from Melville’s 1969 masterpiece. That description is not at all a slight, because it is a short list of films that I think equal the achievement of Army of Shadows. There is also more than enough variation to separate Flame & Citron from Army of Shadows, allowing it to occupy its own unique position. Although lead characters grappling with their actions in wartime is similar to that in Melville’s film, this one is slightly less cerebral. There is a bit more emphasis on action, putting the big budget to use in choreographing hip gunplay sequences. As I said, it is not at the level of the great Melville, but it’s a worthy follow-up and one that I hope everyone that reads the blog will eventually get a chance to see.

Other Contenders for 2008: My first runner-up decision is another movie that is related to World War II. I’ve seen wildly varying reviews on Stephen Daldry’s The Reader, which initially gave me some pause going into it. I now see it as a great purchase. Kate Winslet rightfully took home a Best Actress Oscar for her role as Hanna Schmitz. As I said at the beginning, I haven’t seen everything from last year, but others that I would recognize as favorites would be: Revolutionary Road (Sam Mendes), The Wrestler (Darren Aronofsky), Let the Right One In (Tomas Alfredson), Gran Torino (Clint Eastwood), Slumdog Millionaire (Danny Boyle), and Wall-E (Andrew Stanton). Outside of Flame & Citron and The Reader, though, I have to say not a lot of great films for me.

There are plenty that I still need to see: Waltz With Bashir, The Class, The Hurt Locker, Frost/Nixon, Milk, and a long one that I loaned to my brother and never got back, The Curious Case of Benjamin Button.
Posted by Dave at 12:05 AM