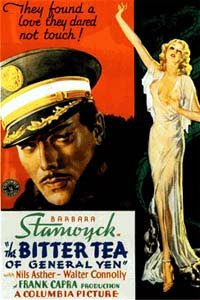 I have a confession to make, and it is one that goes against my usual classic Hollywood-centric perspective – I’ve never been a big Frank Capra fan. It isn’t that I necessarily dislike any of his work that I’ve seen, but outside of the most famous of all of his films (It’s a Wonderful Life) I have been rather indifferent toward him. My apathy hasn’t been the result of the usual complaint made against Capra – the “Capra-corn” label that derides his films for being overly sentimental or moralistic. I’ve actually been struck by how stretched such a claim can be, as there are times in Capra films where characters and situations are very realistic and relevant. But outside of It’s a Wonderful Life I found myself reacting to subsequent Capra films with lukewarm reactions.

Then, instead of plowing straight ahead in the Capra filmography, as I was doing after having started with It Happened One Night, I decided to take a step backward. I tried the less-renowned The Bitter Tea of General Yen and felt like I had discovered some kind of hidden gem. I’m perfectly aware of the fact that I discovered nothing, and that plenty of folks are familiar with it, but I’m amazed that this film is not more celebrated. In what I am guessing will differ from most others, I pick this one as tops for 1933.

The film opens to gorgeously chaotic scenes of 1920s Shanghai, showing the frantic pace of China at this time. With the country in turmoil, as various warlords and government factions begin to battle at the start of the Chinese Civil War, the city is nonstop commotion. Refugees are scattering, buildings are burning, and the opening shots reinforce this sense of confusion. These scenes are very darkly shot and edited at such a quick pace to perfectly convey the sense of chaos of the people. The other thing that struck me from these scenes is how overcrowded everything looks, as it feels like there are so many people jammed into shots that these cities are going to burst. The city genuinely feels miserable and absolutely frenzied.

It is into this environment that American Megan Davis (Barbara Stanwyck) arrives with plans to marry missionary Dr. Robert Strife (Gavin Gordon). However, on the night of the wedding, Strife announces that he must postpone the nuptials in order to rescue a group of orphans in a nearby town. Rather than wait for him in the homes of fellow missionaries, Megan declares that she has come to China in order to assist her future husband. She sets out with Dr. Strife to participate in the rescue, which they believe to be a safe trip after supposedly obtaining travel permits from the powerful General Yen (Nils Asther). But while trying to make their way through the chaos of the city streets, the group becomes separated and Megan is knocked unconscious. When Megan comes to her senses, she is in the railcar of General Yen who explains that he rescued her from harm in the streets and is now transporting her to safety. Megan seems completely unaware of the fact that Yen has likely kidnapped her. 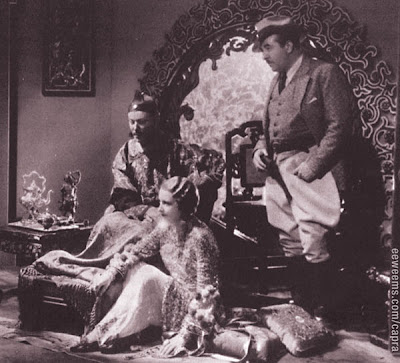 Megan is taken to General Yen’s summer retreat where he holds her as a captive. It is not as a lock and key prisoner, but it is captivity none the less. While under General Yen’s control, Megan becomes acquainted with the various underlings that work with the General. These include a fellow American, Jones (Walter Connolly), who is the chief strategist and financial adviser to Yen. She also becomes friendly with a servant/concubine Mah-Li (Toshia Mori) who begins to complicate Megan’s stay at the compound. It soon emerges that Mah-Li is a spy, conveying highly sensitive information concerning General Yen and his operations to rival factions in the civil war. After Jones alerts him to this fact, Yen sentences Mah-Li to death. She is saved only after Megan personally pleads for her life. Yen acquiesces, having become infatuated with the American woman, but asks that Megan offer her own life as a pledge to Mah-Li’s future good behavior. When Mah-Li continues her scheming, the tenuous relationship that has developed between General Yen and Megan is truly put to the test.

Stanwyck is excellent as usual, but the true star of the film is Nils Asther as the enigmatic General Yen. There is great irony in the Danish-born Asther, a star of the theatre in Sweden of all places, portraying a Chinese warlord. But he is outstanding in the role. The tension that is built in the relationship between the general and the naïve American is due to Asther’s ability to create a character that is mysterious. The reputation that is given to General Yen by the missionaries is one of an absolute monster, as someone who kills and pillages at will. Yet in his conduct toward others, Yen is surprisingly reserved. He is deliberate in both action and speech and seems calm in every situation. It is quite a contrast and leaves the viewer wondering what the true nature of General Yen is. In interaction with Megan he seems the perfect gentleman, being exceedingly courteous. And yet as casually polite as he is to Megan, he can just as coolly order the execution of Mah-Li. Asther is able to exploit this paradox in crafting a very measured character. This detached nature that he establishes for General Yen is believable and never reaches the caricature-level where the general comes across as a psychopath.

The other striking feature of the film is how uncompromising and brutal it is at times. Made in 1933, before strict Hays Code enforcement, Capra is able to get away with a bit more than would have been allowed in the near future. This means he is able to do things like showing prisoners being executed by firing squad at General Yen’s compound. In most films of this era you would hear the shots and maybe see the aftermath of the gunmen. Not here. Capra shows the entire sequence – taking aim, firing, bodies dropping. It is nothing overly graphic, but it is shocking (at least for someone like me who is not well-versed in Pre-Code cinema) to think of this coming from a film of the 1930s. While I don’t feel the need to go into great detail concerning the issue, the interracial relationship between General Yen and Megan is also remarkable. It is amazing that it made it through censors.

There are obvious drawbacks to the film. It would not be a stretch to claim that the portrayal of the Chinese people is patronizing. One need look no further than the opening minutes of the film, when a longtime missionary recounts the tale of a group of Mongolian people who were enthralled by his tale of the crucifixion. He later learned why they were so interested – soon after, they attacked a caravan and crucified the captives. “That, my friends, is China,” the missionary declares. In most instances, the Chinese people are similarly portrayed as exceedingly brutal. But I felt like the depth given to the General Yen character helped to soften some of this prejudice. He was ultimately shown to have a heart and be just as capable of acting out of something other than self-interest.

I’ll be interested to see just how big of an “upset” this is as a pick for the best of 1933. I have to admit that overall this is not a great year for me, at least in comparison to some of the years around it. But The Bitter Tea of General Yen is a film that would at least compete against competition of any year. It is intriguing for me to see another side of Frank Capra as a filmmaker and the photography of Joseph Walker is a great compliment to this darker style. At times, the film looks like a noir set in Shanghai, and instantly reminded me of a William Wyler film of seven years later, The Letter. Combine these strengths with the performance of Nils Asther and it is an outstanding film.

Other Contenders for 1933: As I said, not a banner year for me, but there are a few other films that I considered. Fritz Lang’s The Testament of Dr. Mabuse is intriguing but I don’t rank it with some of my other favorite Lang films. Barbara Stanwyck was in another legendary pre-code film this year, Baby Face, and her individual performance is better there than in The Bitter Tea. If you thought she was conniving as Phyllis Dietrichson, check her out as Lily Powers in Baby Face. My guess would be that the Marx Brothers classic Duck Soup will be the most popular choice, but not being the biggest fan of the Marx Brothers fan it’s not my selection. It certainly is funny, but not one I would list as an all-time favorite. King Kong is another film that I can appreciate for its historical value, but not a personal favorite.
Posted by Dave at 8:15 PM