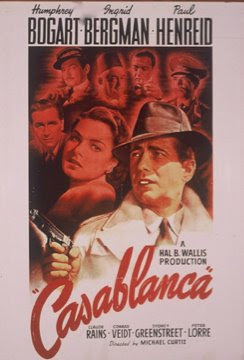 Don't tell me you're surprised by the choice? For someone like me, who is completely enamored with classic Hollywood, there was never any doubt. So, here is yet another entry in the “what can I possibly add to the volumes already written on this film?” category. The obvious answer is not a whole lot, at least in terms of scholarly film analysis and interpretation. All I intend to do in making Casablanca my runaway selection as the best of 1942 is recount my own personal experiences with this classic and why it has remained possibly the most versatile film in my viewing activity.

By versatility, I am referring to the fact that this is a movie that I can watch at any time, regardless of my mood. It doesn’t matter whether I am happy or sad, depressed or in high spirits, tired or wide awake. It can cheer you up, it can calm you down. It can make you smile or be quite touching. I know firsthand how comforting it can be, as I can still vividly remember putting it on the first night I returned from the hospital after a very scary episode of what I would ultimately discover was cancer. Casablanca is like a safety net of sorts for me and thus will always have a significant place in my life.

The background on the conception and production of the film is legendary and is probably well known by most readers. Still, it is always amusing to remember that this film that has become so iconic was originally viewed as just another movie. There are legends about key roles being offered and refused – George Raft as Rick, the even more shocking possibility of Ronald Reagan in the lead, the push for William Wyler to direct. Judge for yourself the veracity of such claims, but true or not they certainly reinforce the recognition that producer Hal Wallis ultimately found the perfect combination of actors and director. In Michael Curtiz he had a man perfectly suited to oversee the studio setting in which nearly all of the scenes were shot. And with a cast that resembled representatives at the soon-to-be-established United Nations – according to that fount of knowledge and sometimes accurate resource Wikipedia, only three credited actors were Americans – Wallis and Curtiz were able to create an atmosphere in which each performance appeared to one-up the other. 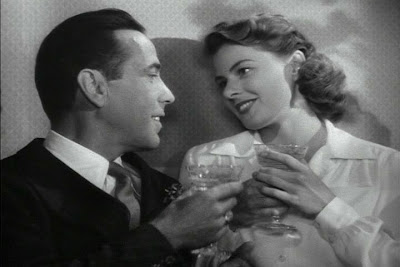 Leaving the appeal of the story aside, the key characteristic of the film that has always stuck out to me is the number of truly great performances that are on display in this film. This applies to roles of all sizes, be it the top-billed or the supporting cast. Humphrey Bogart is the epitome of cool as Rick Blaine, the expatriate American who runs the popular café. He does his best to make it clear that his number one priority in life is looking out for himself, and this is articulated by both words and physical nonchalance. Ingrid Bergman is irresistible as Rick’s love interest Ilsa, who reunites with him in Casablanca and completely wrecks the life that Rick has crafted for himself. As Ilsa’s husband Victor Laszlo, Paul Henreid is determined and fully committed to the cause of France. While maybe not as impressive as other performances, Sidney Greenstreet is sufficiently immoral as Signor Ferrari, the club operator and self-styled rackets boss. Claude Rains is the French Captain working with the Nazis, but Rains makes the Captain so likable that such an indiscretion is overlooked. The interaction between Rick and Captain Renault is unendingly witty. They appear to be at the same time adversaries and the best of friends. Then there is Peter Lorre playing the excitable knockaround guy Ugarte, a criminal who is both sleazy and sweet-talking. In his very limited time in the film, Lorre very well may be the most entertaining. Whenever I think of Lorre I always think of him as Ugarte telling Rick that “...just because you despise me, you are the only one I trust.” 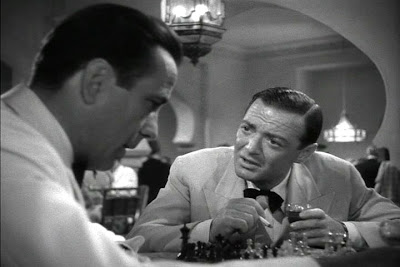 These central performances are routinely celebrated, and rightfully so. But the lesser roles are what really add subtle flourishes that make the city of Casablanca feel alive. In this case I am thinking of characters like Carl, the waiter at Rick’s. While nearly everyone else in Casablanca views the city as something of a purgatory on the way to freedom, Carl seems to be always cheerful. His interaction with various characters is amusing, with his sarcasm coming through with biting one-liners. Just witness his declaration that he decided on his own to give Major Strasser the best table, “knowing he was German and that he would take it anyway.” There is Sasha, the bartender who woos the women who come into the club. It’s impossible not to smile when he tells a spurned lover or Rick’s, “Yvonne, I love you, but he pays me.” Dooley Wilson, Rick’s most loyal friend and employee, is delightful. Such minor characters, although not playing substantial roles in the story, feel fully developed. They are not just included to take up space on the screen, but instead enhance the movie.

The number of enduring scenes and quotable dialogue are innumerable. Who can forget the dueling national anthems, with the passionate singing from the French patrons at Rick’s? Or how about Captain Renault leading his officers into the café and feigning indignation as he tells Rick, “I am shocked… shocked, to find that gambling is going on here!” While I could go on for days citing my favorite moments and exchanges, I won’t indulge myself. But I do think that naming such diverse scenes as being so memorable speaks to why this movie is so appealing to me and so many others. I already mentioned how I can put this movie on at any time and be drawn into the story. This is because there are so many different things to concentrate on. It can be viewed as a good ol’ fashioned love story, and may well be the best of its kind. You can watch it as a war movie, with a story documenting Nazi resistance. There are many moments of comedy, such as the above raid by Renault or scenes involving Sasha and Carl. Versatile is the word I keep coming back to.

I’ll close things with another fond memory I have of watching the film, this time in a group setting. I am a young guy, so it was only a few years ago that I was sitting in a college classroom for a “History Through Film” course. Casablanca was one of the films selected to be shown, which was great for me as it was already one of my personal favorites and I had seen it many times. Sadly, some folks in the class had not already seen it or had only a vague knowledge of the film. What I remember about that day is that after running a bit long with the lecture, the professor realized that the movie was not going to be done by the end of class. So as we neared the normal ending time, he told the class that if someone needed to leave that they could go ahead but anyone who wanted to stay and finish the film was more than welcome. Not a single person left. It just underlines what a timeless film this is. 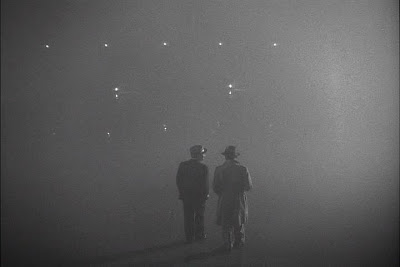 Other Contenders for 1942: There was never any doubt about what the choice was for this year. Still, Ernst Lubitsch’s classic comedy To Be or Not to Be is so good that I almost feel guilty about the fact that it doesn’t somehow make the countdown and get a full review of its own. It is nearly as good as Trouble in Paradise, which I consider to be Lubitsch’s greatest film. This was also a year that fell within the stretch of time in which Preston Sturges was white hot. Palm Beach Story is another outstanding comedy written and directed by Sturges. While I don’t think it is Sturges’ best film, the “weenie king” scene is as clever as comedy writing gets. The Jacques Tourneur-Val Lewton combination starts off strong with Cat People – that scene in the swimming pool is still chilling! The Magnificent Ambersons is an interesting movie to evaluate, as there are two decidedly opposite camps. One group considers it to be Welles’ true masterpiece and the other finds it completely uninspiring. I’m somewhere in the middle – as the studio cut it and released it, it never manages to reach the heights of Citizen Kane or Touch of Evil for me, but it’s still an interesting story. One can only wonder how Welles himself envisioned the film to be. And finally, while I don’t feel that Michael Curtiz’s Yankee Doodle Dandy is as good a film as the others mentioned, James Cagney’s performance is incredible and deserves to be mentioned. The man was just so multitalented.
Posted by Dave at 7:18 AM