1943: I Walked with a Zombie (Jacques Tourneur) 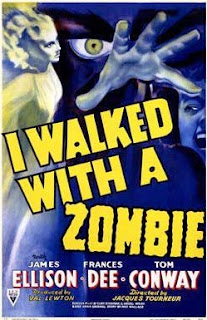 Val Lewton oversaw nine horror classics at RKO, working with directors such as Jacques Tourneur, Robert Wise, and Mark Robson, all of whom would go on to prominence in later independent pursuits. However it would not be a stretch to argue that these directors produced some of their best work in these low-budget masterpieces. While each of the films in the cycle has developed loyal supporters, many seems to have settled on 1942’s Cat People as the gem of the bunch. It’s hard to argue that opinion, as the famed pool scene from that film is among my favorite in all of American cinema. But in deciding on my favorite of the Lewton RKO films, I’ll side with the producer himself, who is said to have declared his own personal favorite as the next year’s collaboration with Jacques Tourneur, I Walked with a Zombie.

I’ll even go a step further. Not only do I feel this is the best of Lewton’s films at RKO, it is also quite easily my favorite of 1943. It may have been a B-movie, but the atmosphere and suspense created is the equal of any full scale blockbusters.

The interesting thing about this film is that although classified as being in the horror genre, it’s not a horror film in the usual sense. I guess a more accurate description would be a mystery film with a tinge of the supernatural, but that’s not nearly as catchy or shorthand as simply calling it a horror movie. Still, it’s worth noting that I Walked with a Zombie isn’t unnerving due to violence or gory spectacles, as has become the staples of modern horror. Not only is there not much in the way of violence, there never really appears to be the threat of serious violence taking place. Instead, Tourneur and company combine a mixture of voodoo folklore and eerie use of shadows to craft a story that serves to make the viewer feel more uneasy than outright scared. There is a certainly a supernatural aspect to the film – after all, how could a film with such a title _not_ involve some type of mysticism – but it is different from other monster or zombie movies. 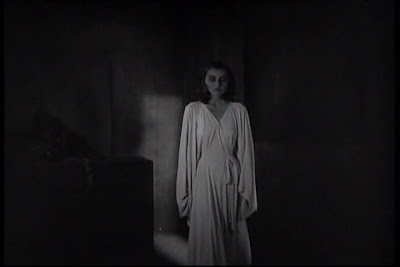 The story is a unique blend, combining a magazine article by Inez Wallace with certain elements of Charlotte Bronte’s Jane Eyre. It follows the Betsy Connell (Frances Dee), a Canadian nurse who is hired by Caribbean plantation owner Paul Holland (Tom Conway) to care for his incapacitated wife. The woman, Jessica Holland (Christine Gordon), is still living, but does nothing more than eat and lay in bed, acting like a – surprise – zombie. After arriving on the island, Betsy also meets Paul’s half-brother Wesley Rand (James Ellison), who speaks disparagingly of his brother and seems to indicate to Betsy that Paul is the reason that Jessica is incapacitated. For his part, Paul does much to reinforce some of these suspicions, talking of death and beautiful things succumbing to it. Even so, Betsy begins to fall for Paul, increasing her determination to bring Jessica out of her paralyzed state. 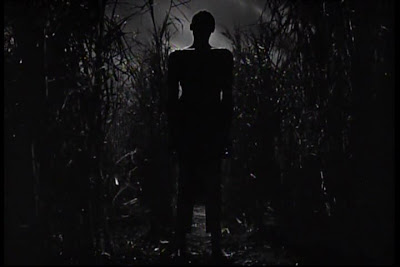 Traditional medical treatments fail to help her in this mission and so she then begins to turn toward local practices, becoming intrigued by voodoo. The belief in zombies, or living dead beings such as Jessica, is a part of this voodoo tradition. There is a thriving community practicing the art, which traces its origins to the days of slavery on the island, and at the urging of a housemaid, Betsy decides that voodoo medicine may be Jessica’s only hope. This leads to one of the exemplary sequences in the movie, as the nurse leads her barely mobile patient on a clandestine journey through sugarcane fields and plantations in order to reach a voodoo ceremony.

The acting in the film is more than adequate, though it falls well short of amazing. This is unimportant, however, because the true stars of the film are director Jacques Tourneur and cinematographer J. Roy Hunt. I’m worried about becoming a broken record in continually praising the atmosphere of my favorite films, but this is such an integral part of the success of this movie that I have to say it again. It both looks and feels like a mystery set in the Caribbean is supposed to. This film is not just dark in certain scenes, but looks as if a cloud or fog is perpetually blanketing the set. This effect is a major reason why certain sections have the unsettling effect that they do. The previously mentioned journey through the plantation fields in search of the voodoo ceremony is spectacular. Adding to the brilliance of this sequence is Tourneur’s decision to let the elements be the only soundtrack accompanying the voyagers. As Betsy and Jessica make their trek, the howling wind and whistling of the plants amplify the uneasiness. Equally as stunning is the earlier sequence in which Betsy follows a then-unknown Jessica as she roams the plantation in sleepwalking-like trance. 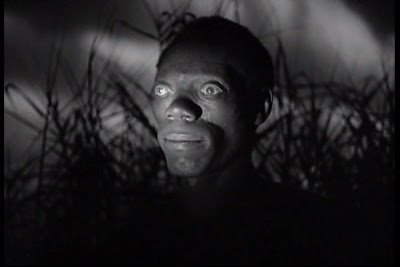 The story also benefits from subtle incorporation of the island culture. The sound of the drum that the natives beat throughout the night gives the sense that Betsy is being led on a doomed march. I also love the manner in which the calypso singer (Sir Lancelot) and his song are handled. While Betsy and Wesley Holland dine at an outdoor café, you can hear the lyrics of the song in the background, recounting the story of the Holland family. You don’t initially see the calypso singer, but based on the reactions of Betsy and Wesley, it is understood that the story being told in the song is significant. Thus, the attention of the audience is drawn to the song and more of the previous story of the family is revealed in this fashion. It is a brilliant way of filling in background of the situation with Jessica and her husband without having a character reveal it in a more cliché manner such as an awkward speech or narration.

This is a short, entertaining, quick-moving thriller. It’s amazing that Lewton and Tourneur were able to make a movie that feels so fully developed while clocking in at only 69-minutes. Lewton produced many other outstanding films and Tourneur would go on to direct a film that I personally rank among my 4-5 favorites of all time (you’ll see it in the countdown very soon), but this is one that I always enjoy revisiting.

Other Contenders for 1943: As I survey the entire roster of films for 1943, I see a lot of quality films but not quite the number of masterpieces as in other years of the 1940s. The films that I’ll highlight here are more personal favorites than films that are normally considered to be the best of the year. I Walked with a Zombie is not the only excellent collaboration between Lewton and Tourneur in this year, as they also teamed up to make The Leopard Man. I have always liked this one, while still considering it to be a little below the quality of I Walked with a Zombie or Cat People. I have to admit to not having seen the third Lewton film of this year, the Mark Robson directed The Seventh Victim, so I can't compare it. While most see it as a U.S. propaganda film, I’ve always had a soft spot for Howard Hawks’ Air Force. It might be overly patriotic and sentimental but for whatever reason these aspects have never bothered me. Alfred Hitchcock also released a legendary film in 1943, with Joseph Cotton starring in Shadow of a Doubt. While I don’t rate it as high as others that I know – I know some people consider it the equal of films like Rear Window and Psycho – I still think it is very well done and at least in the same stratosphere as his other major films. William Wellman’s western The Ox-Bow Incident is also very well done, as Henry Fonda is very good in his lead role. Also worth of recognition, while not director Henri-Georges Clouzot's best film, is the intriguing mystery Le Corbeau.

The strongest contender in this year, however, came from Denmark and famed director Carl Theodor Dreyer. If The Passion of Joan of Arc isn’t proof enough, Day of Wrath confirms that Dreyer could make a film that would just grab you by the gut and never let go. This story of witch trials and accusations is depressing for me, but it’s so well made and captivating that I couldn’t stop watching.

I would imagine that the Powell and Pressburger film The Life and Death of Colonel Blimp will register support as well. I like it, but it has never really been a favorite and was never in contention in my selection process.
Posted by Dave at 9:22 AM