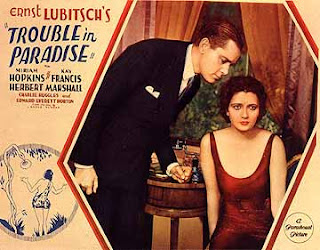 Many times I’ve wondered what it must have been like to have spent an afternoon at the cinema during the Depression. To have been alive during a time period where so many great movies were being released and when films were able to play such integral parts in people’s lives. In these Purple Rose of Cairo-like romanticized daydreams, I’m always watching the same kind of film. It is one that is endlessly entertaining. It is humorous without being senseless. It’s stylish without being pretentious.

In a nutshell, I’ve always been dreaming about a movie like Trouble in Paradise. It perfectly fits each of the above descriptions. When I fantasize about what it must have been like to while away an afternoon at the theater in the 1930s, I am imagining a limitless stream of charming films like this. It defines for me what that entire experience must have been like. More than that, this film is a testament to the greatness of a director that is all but forgotten by the average movie fan. I am fairly certain that the fine folks that read this blog are at least somewhat familiar with the work of Ernst Lubitsch, but it never hurts to be given a reminder. Not only does Trouble in Paradise top my list of films for 1932, it makes an incredibly strong case of topping any list concerning the entire decade.

The amazing thing about my love for this film is that I traditionally have problems connecting with the early talking comedies of this era. It’s not that I dislike them; it’s more a case of me tending to appreciate them, but at arm’s length. I like them, but until recently I would rarely fall in love with them. The rapid-fire dialogue that developed in the early/mid-30s and that would later become a hallmark of the screwball comedy is oftentimes overwhelming for me. I appreciate the witty dialog and biting one-liners, but sometimes I wish that I had the time to fully appreciate them rather than quickly preparing myself for the next one to come right on top of it. Trouble in Paradise precedes these types of films and this is precisely why it works so magnificently for me – the dialogue, really the entire film, moves with the same elegance as the aristocratic characters in the film. The quips and banter just feel so smooth. 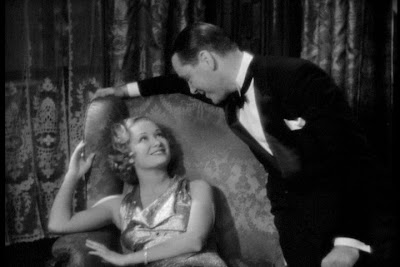 Herbert Marshall is at his best as Gaston Monescu, a role requiring equal parts chic and sleaze. Gaston is an internationally-known thief, a man who has robbed banks in Constantinople and tourists throughout Europe. While in Venice posing as a noble baron, Gaston meets a kindred spirit and fellow crook in blond beauty Lily (Miriam Hopkins). Both are pretending to be refined upper-class travelers, but neither is fooling the other. When they meet for dinner, they slowly begin to reveal their true characters to each other through a series of sly thefts – Lily steals Gaston’s wallet, Gaston removes Lily’s pin without her noticing, Lily lifts his watch. It is an incredibly charming scene and establishes the fact that they may be master thieves, but they are also endearing.

Soon after meeting, the duo manages to lift a jewel-encrusted purse from perfume heiress Mariette Colet (Kay Francis). When the heiress responds by placing an ad and offering a large reward for the return of the purse, Gaston decides they would be better off returning it. He realizes they are likely to make more on the reward than by fencing it. In the process of returning the purse, Gaston sees the opportunity for an even bigger score. Utilizing all of his charm, Gaston is able to manipulate Mariette around her gorgeous mansion. He compliments her various artwork and décor, casing the house as he is being led on a grand tour. Mariette falls for both the compliments and Gaston. She immediately hires him as her secretary and Gaston quickly begins to assume control over her affairs and the affairs of the Colet family business. Gaston brings Lily ostensibly to work for Mariette, but in truth to help him scheme for a bigger payoff. The two plan to get as close to Mariette as possible, rip her off for $850,000, and then make a quick exit. But things become extremely complicated as Gaston himself begins to fall for Mariette. The burgeoning romance looks as if it might spoil the heist and Lily realizes she might lose her boyfriend in the process. 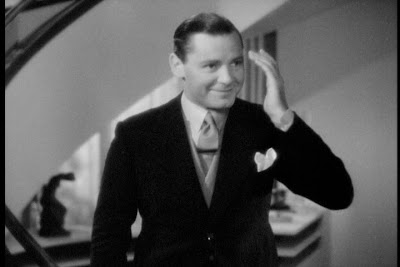 This is nothing more than a broad overview of the story, but there is really no need to reveal anymore. Not only is the story one that viewers are familiar with, but the storyline itself is secondary. What carries the film is both the witty dialog and the magnetic interaction between the characters. As I said earlier, the role of Gaston seems tailor-made for Herbert Marshall. In nearly any review that you read about Trouble in Paradise, you will see Marshall referred to as “charming.” Who am I to go against tradition? It’s an accurate description. There are no great histrionics from Marshall, but there is a certain cynicism in his delivery to really put the comedy over. The clean-cut, handsome Marshall makes Gaston into a believable aristocrat, while at the same time infusing enough sarcasm in his speech and actions to remind everyone that at root he is still scheming.

It is also interesting to watch the two women whose characters are competing for the heart of Gaston and who as actors are competing with each other to steal the show. For me, it’s futile to try and determine who is better, and why should I even attempt to analyze such a thing? They are two distinct characters, but appealing in separate ways. Miriam Hopkins’ Lily is forceful, never losing sight of what she is and why she and Gaston are in the Colet home. She tosses off memorable lines and hilarious threats with ease. Some of my personal favorites, that I can’t resist highlighting are:

Mariette is equally as ambitious, but Kay Francis manages to give her a more carefree air. She clearly wants to make Gaston her own, even to the point of continually overlooking whatever warnings friends give her. She is downright seductive, constantly putting Gaston in situations where he cannot resist her advances. Whereas Lily is assertive toward Gaston, with the exception of the opening dinner table scene, the repartee between Gaston and Mariette is much more playful and give and take. Francis’ career began to tail off later in the 1930s, but in this film she registers at least one truly great performance. 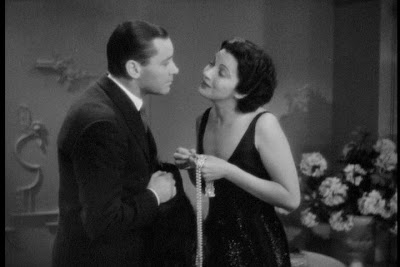 Even with this trio of great performances, the bulk of the praise has to go to Lubitsch. Also, it's necessary to acknowledge screenwriter Samson Raphaelson, who apparently worked closely with Lubitsch in all stages of the film, wrote the witty lines that were so brilliantly delivered. The famed “Lubitsch touch” is something that I have never been able to find a definitive definition for. But, if I were to try and pinpoint what makes Lubitsch so spectacular, it would be in his ability to craft an atmosphere of seduction. Sex appeal emanates from every close encounter in the love triangle. He does it in such innovative ways, that it is infinitely more fascinating than if he had been graphic. It is seemingly simple methods like instead of showing Gaston and Mariette hugging, to show the embracing couple casting shadows onto the nearby bed. Or his filming of a clock, measuring how the couple takes a simple dinner and manage to stretch the night even further – the hands on the clock continue to advance, as the couple giggle and flirt well into the next morning. Or the previously mentioned dinner table scene between Gaston and Lily, where they are clearly getting increasingly turned on with each successive theft.

Really, even after my gushing over this film, I have to admit that it’s difficult to put the greatness into words. I don’t know if I am anywhere near doing justice to the sensual atmosphere that Lubitsch was able to create. This is a film that has to be seen and fully experienced. Only after witnessing the culmination of each brilliant element of the film – writing, directing, and acting – coming together so splendidly can you truly appreciate how great it is.

Having only recently watched it for the first time, Trouble in Paradise is the best “discovery” that I’ve made in quite some time. And it has profoundly impacted my movie-watching ever since. It reminded what was originally so appealing about movies – entertainment. Sometimes I (and I assume many other cineastes as well) get so swept up in analyzing and interpreting films that I lose sight of the fact that there is nothing wrong with a movie just being downright fun. Trouble in Paradise proves this and it is the most fun I’ve had with a film in a long time. Dare I say the best comedy ever made?

Other Contenders for 1932: This was an outstanding year, and while none of the other films approach Trouble in Paradise for me, there are still a number of movies that I can understand someone else picking as their favorite. While I don’t rate quite as high as others, Howard Hawks’ Scarface: The Shame of a Nation is very good and many consider it the best of the classic gangster films. Paul Muni is great as Tony Camonte and equally as good as the wrongfully-convicted James Allen in I Am a Fugitive From a Chain Gang. I’ve always had a soft spot for Irving Pichel’s short thriller The Most Dangerous Game. Laurel and Hardy are entertaining in The Music Box. Dietrich and von Sternberg have another successful collaboration in Shanghai Express. A lot of wonderful films to cover in 1932, but I still maintain they are towered over by Trouble in Paradise.
Posted by Dave at 10:02 AM