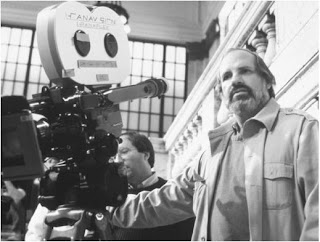 - "So I like to try to go back and develop pure visual storytelling. Because to me, it's one of the most exciting aspects of making movies and almost a lost art at this point."

Brian De Palma can split film critics and moviegoers faster than anyone, Steven Spielberg included. What is so interesting in regard to De Palma is that there is rarely any middle ground in assessing his body of work. To those that appreciate him, De Palma is a technical virtuoso who has inherited the mantle of his cinematic idols. For those that don’t care for his films, he has simply made a career out of producing cheap, second-rate imitations of Hitchcock and other legitimate giants. Where do you fall in this debate? Is there any middle ground among those that dare to venture to each newly-released and critically-panned De Palma film?

Where I fall on the spectrum is obvious since he is included in this list. I have always had at least a limited interest in De Palma, but it was only recently that I went on a serious binge. I had actually shied away from some of his more maligned efforts, figuring if they were panned _that_ badly, then everybody couldn’t be completely wrong… right? Wrong. What is commonly listed as being among his worst films is now sitting atop my list of favorites. And as my appreciation of De Palma’s visual style has continued to increase, so too has my appreciation of his earlier films, as I went back and re-watched movies that I had not seen in some time.

De Palma is one of the great visual stylists working today. Those that dislike his films in general are likely to deny such praise, but I stand by it. The man does things with the camera and editing that rarely fail to impress me. Maybe someone will not enjoy the story, but I am amazed that fans of cinema are not at least mildly interested or impressed by his visual flair. De Palma gets playful, exulting in what he can do with the camera and the film, and this is often interpreted as being tricky and rendering his stories incomprehensible. Certainly, many of his stories can be hard to follow at times. But in most cases, repeat viewings show that De Palma has actually laid things out. The clues might not be easy to pick up, but they are there. Rather than concentrating on them, though, I recommend just taking in the wonderful atmosphere and scenes that De Palma revels in creating. Finding a coherent story and interpretation will be there on repeat viewings.

I’ll be particularly interested to hear thoughts from everyone on some of De Palma’s more reviled films that I hold dear – particularly The Black Dahlia and Mission to Mars. Both have been completely torn apart by critics, but I think they are very, very good.

Next we come to the man with the famous Touch: Ernst Lubitsch.
Posted by Dave at 12:05 AM