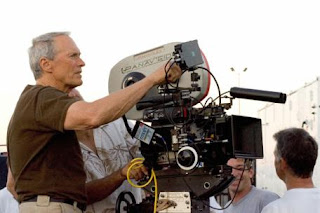 - "I love every aspect of the creation of motion pictures and I guess I am committed to it for life."

Is there a more iconic figure in Hollywood today? The question could probably even be framed as “in all of cinema?” Including each facets of his career, meaning both acting and directing, I don’t think there is. The personas he developed as an actor have become completely enmeshed in pop culture. I dare say there isn’t a single person older than their teens that doesn’t know about The Man With No Name or Dirty Harry. But this series is not about great leading roles, it’s about directors. And whether or not the public at large recognizes it or not, Eastwood’s talents behind the camera exceed those he displays in front of it. Don’t get me wrong, I love Eastwood the actor – when he is selective and carefully chooses the proper roles, he is outstanding. What never ceases to fascinate me about him, though, is his willingness to branch out as a director. By this, I mean that although he is still immediately linked to westerns, he has shown himself capable of directing a variety of genre films. And he has succeeded in almost every endeavor. Westerns, crime dramas, war movies, mysteries… the man can handle anything.

Even so, as a huge fan of his work, even I still find it hard to separate Eastwood from the genre in which he made a name for himself. While not every western that he has directed has been great, he has two undisputed masterpieces in The Outlaw Josey Wales and Unforgiven. I would argue that High Plains Drifter is incredibly underrated and borders on such an honor, but I don’t think there is any debate regarding Josey Wales and Unforgiven.

I also find something very appealing about the way that he revisits various themes and styles throughout his work. Distinctive visual styles are maintained through various periods, as he teamed up with specific cinematographers and worked through whole cycles with them. Right from the start in his directorial career he collaborated with Bruce Surtees, whose darkened, hazy cinematography added an edge to every story. When he stopped working with Surtees in the 1980s, Surtees’ former camera operator Jack N. Green stepped in and provided continuity. In fact, it could be argued that the films took an even starker visual style. Just watch Unforgiven; even in lighter moments, there is something gloomy about it all. And finally, the third and current phase with Tom Stern has been equally as impressive, resulting in visual marvels like Mystic River, Flags of Our Fathers and Letters From Iwo Jima. Eastwood’s style might not have as much of the visual flair of his mentors such as Sergio Leone, but I like his approach. He teams himself with talented people (like the aforementioned cinematographers) and opts for a slightly less daring use of the camera. What makes up for any lack of bold directorial flourishes is the man’s innate storytelling ability. Some just have a natural affinity for storytelling, and like Howard Hawks, Clint Eastwood has it.

There are certainly some duds in Eastwood’s total filmography, but at the top of his game he is among the best living directors.

Up next is a master of classic Hollywood and arguably the greatest of all western directors: John Ford.
Posted by Dave at 12:05 AM