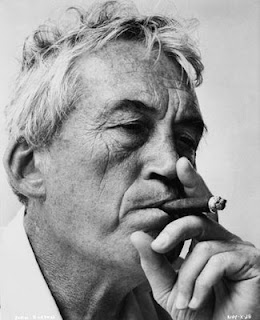 - "Hollywood has always been a cage... a cage to catch our dreams."

I am in no way suggesting that John Huston should be classified as an “underrated” director. How could he be, considering that a number of his top films are rightly regarded as being among the finest ever produced in Hollywood. I do think, though, that his top two or three movies (and I suppose his role in Roman Polanksi’s Chinatown) are viewed as a complete summary of the man’s extraordinary career, which is a shame because there is so much more there. To be certain, his most famous pictures – The Maltese Falcon, The Treasure of the Sierra Madre, The Asphalt Jungle – deserve all of the acclaim that they receive. I love every one of them. But his lesser-known films are of such high quality, it amazes me that they are not more widely praised. The Misfits receives publicity because of the stars attached to it – it was the final film for both Marilyn Monroe and Clark Gable, and Montgomery Clift gave one his final performances, and Arthur Miller penned the screenplay – but it deserves recognition as the equal of Huston’s best work. Fat City is one of the four or five best boxing films ever made. The Dead is beautifully poetic. The Night of the Iguana might be my favorite screen adaptation of Tennessee Williams.

This is a man who continued making outstanding films for over forty years, remaining interesting through every phase.

Most of Huston’s films have a general vibe or feeling that make it known that he is the guiding force of his projects. I have seen his auterist credentials questioned, but I rarely have trouble recognizing Huston's style. His movies may not have been personal, but they contained similar threads that stamped them as John Huston films. Part of this I’m sure is due to the fact that, at least early in his career, he almost always had a hand in writing the scripts that he directed. His talents as a writer deserve nearly as much praise as those as a director. Being involved in projects from this early stage allowed Huston to instill a trademark understated cynicism to every film. It isn’t cynicism like one gets from a Billy Wilder film, where Billy is poking fun at everyone and everything. It is a cynicism where a fateful break, a stretch of bad luck, or good old ironic twists triumph in the end. His heroes come oh-so-close to fairytale endings, but never quite get there. Is it a pessimistic view? Some could read it that way, but to me it just feels realistic.

A connection to a modern director that I always think about is a lineage from John Huston and his early crime genre work and current crime film specialist Michael Mann. Both men set up great set pieces centered on heists and mysteries, but both Huston and Mann are more interested in examining why the participants are involved in the schemes and what compels them to take such risks. The heists or action is just the means by which they can examine their main characters.

Up next, a man who dabbled in many styles and produced classics in all of them: Anthony Mann.
Posted by Dave at 12:05 AM