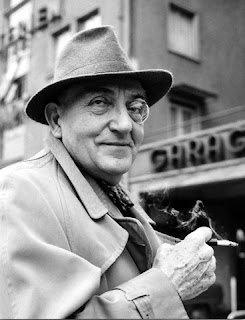 - "“Each picture has some sort of rhythm which only the director can give it. He has to be like the captain of a ship.”

Everyone reading this will likely agree that if Fritz Lang never came to the United States in 1936, his output in his native Germany alone would have still been strong enough to warrant placement in a countdown of this scope. Indeed, when you see my ranking of his films below, the top three all come from Lang’s pre-Hollywood days. But I am guessing that most people reading this are also similar to me in that they first came to Lang through his much more widely-available – and arguably more accessible – Hollywood films. Once I made my way through those that were easier to come by, it was inevitable to move on to his more critically acclaimed early days and see how the Lang legend was built. It was surprisingly difficult for me to try and compare and rank the films from these two distinct periods in Lang’s work, particularly when factoring in the fables and tales that have grown concerning the production of many of Lang’s early films. In terms of that hard-to-define quality of “greatness,” few if any of Lang’s American movies can trump those from Germany. Even so, I do love Lang’s American work, almost as much as his earlier German period, and in terms of favorites I place the best of his American work quite high.

These two separate phases make Lang’s complete body of work all the more fascinating, in my opinion, as it is interesting to observe the similarities and differences between them. In visual terms, there is no question that the more experimental and interesting work was done in Germany, as the cinematography and camera work in masterpieces like Metropolis and Destiny are still a marvel to behold almost a century later. His pictures of the 1920s display flair and style that almost immediately identify them as Fritz Lang films. I acknowledge that Metropolis is the greater and better film, but I have recently fallen in love with Destiny and am amazed at how beautifully eerie the cinematography is in that one. It is absolutely brilliant.

His best work on the western side of the Atlantic unquestionably centered on highly skilled crime dramas. Focusing less on technical artistry and experimentation, dark narratives and storytelling characterize these films. Taking a cue from what I consider the best movie he ever made – 1931’s M – Lang became a master at tackling dark subject matter, and even more impressively dark characters. The leading men and women in Lang movies like Fury, You Only Live Once, Scarlet Street, The Big Heat, and others seem like people predestined to hardship and suffering. Even the most hardened, bitter characters are rendered at least somewhat sympathetic in the way that Lang and his collaborators portray them. This ability is a main reason why Lang is one of the few men of the era who can stake a legitimate claim to being the greatest director of film noir. I don’t quite personally give him that mantle, but he is very close.

The sheer number of outstanding films in his total filmography might be the most impressive thing. I have ranked 20, which is nowhere near his entire output, and there honestly is not a bad movie in the entire list. Not all of them are M or Metropolis, and not all of them would be considered favorites, but all are enjoyable and worth seeking out.

Up next: We go BLIND! Now things will be like countdowns of the past. Folks making submitting their own lists will not suffer, as I am highly unlikely to roll out a director that people are completely unfamiliar with. Plus, with two days for each entry, there is plenty of time. So the tension mounts! (LOL)
Posted by Dave at 12:05 AM