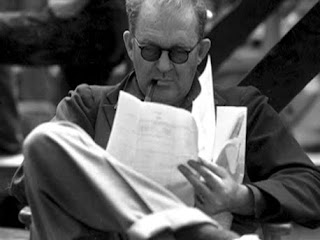 -“My name is John Ford and I make Westerns.”

I almost feel guilty at placing John Ford at this point in the countdown, as his shadow looms large over so many areas of film history. Nearly every post-1930s director has cited Ford as a major influence on their work – titans such as Kurosawa, Welles and Scorsese have at various times basically declared him to be their favorite director. Bergman declared him the greatest director to ever live. There are even moments when I feel like I should do the same. Why then is he #22 and not closer to the top? In going back through as much of his catalog as I could in preparation for this entry, I came to realize that my passion for his films has much variation. When I watch what I consider to be Ford at his best – The Searchers, The Man Who Shot Liberty Valance, Grapes of Wrath to name a few – that feeling of watching a master craftsman comes over me. It really does seem like I am witnessing a director without peers. At other times, though, I honestly get a bit listless toward some of his output. It’s not that I think he has made many bad films – quite the contrary, I don’t think any in my list below would be classified as “bad.” Still, a number of them do not necessarily move me one way or the other.

But I don’t want people to think that I am being negative toward Ford. Obviously I am not or he wouldn’t even be in a countdown of this nature. I’m just giving something of an explanation as to why a man who has made multiple films that are of the 10/10 variety for me isn’t in the upper half of this series. Ultimately though, as I said in a past thread here, I tend not to get bogged down in the number of misses a director or artist puts out. I am primarily interested in seeing how high someone can reach with their best output. And as I remarked earlier, Ford at his best is nearly incomparable, particularly in his most famous of genres. Anyone championing The Searchers or The Man Who Shot Liberty Valance as the best western ever made wouldn’t get an argument from me. I might personally place a few before them, but I completely understand the sentiment. As quickly as everyone identifies Ford with the western, though, there is much more to his overall body of work. What stands out to me most, in examining the entire length of his career, is the love that Ford had with the idea of America. He exhibits a fascination with the building of the nation, the myths and fables that developed in the process, and putting his own stamp on the retelling of American history. You can nearly trace the course of American history through his films – from the Revolutionary era of Drums Along the Mohawk, to the early days of President Lincoln in Young Mr. Lincoln, through his triumphs in the American West, all the way through the two World Wars. Historical accuracy is oftentimes dubious at best, but that is not the point. Ford works as a storyteller, not a documentarian, and the results speak for themselves. What makes his version of American history so irresistible is the visual beauty that he gives it all. To this day, no one has shot the expanses of the West as magnificently as did Ford. And it’s not just in the sweeping vista shots that Ford shows his genius. His more subtle touches are equally as impressive. Just watch the first appearance of John Wayne in Stagecoach. It is a simple, yet utterly spectacular introduction of one of the most iconic figures in movie history.

I suppose the finest compliment that could be given to Ford’s work – and one that the old curmudgeon would have appreciated – is how embedded in the American fabric are his films. To many, John Ford and his movies ARE the Wild West.

And before anyone faints at seeing it that low, I'll just say now that I have always had problems with My Darling Clementine. Normally I can get past most any historical inaccuracies - after all, how else can something like JFK or The New World be all-time favorite films? - but with Clementine I never can. They get to me every time, with my viewing last week being no exception. Is this a result of being too familiar with the Earp and Holiday stories? Perhaps, but I'm not really sure. In the end, it looks great but outside of that it doesn't do much for me.

The next entry deals with a man that some consider to be the greatest director of all time: Stanley Kubrick.
Posted by Dave at 12:05 AM