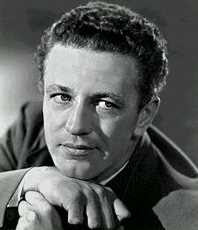 - "That’s the obligation of the filmmaker or the theater worker – to give a heightened sense of experience to the people who pay to come to see his work."

Would it be cliché to open an entry on Nicholas Ray by marveling at how the French adored the mercurial director? Anytime a survey of Ray’s career is discussed, or analysis of his work attempted, it is mentioned that during the 1950s few American directors were held in such high regard at Cahiers du Cinema as Ray. Jean-Luc Godard in particular appeared to worship the man, once boldly declaring: “The cinema is Nicholas Ray.” At his best, I don’t know that I would necessarily argue with the sentiments of Godard and other leaders of the French New Wave. The sentiments expressed in Godard’s comment are justifiable considering the skills displayed in Ray’s moviemaking. In the hands of directors of lesser ability, a number of his films would play as little more that pulpy melodrama. As great as movies like They Live By Night and Rebel Without a Cause are, without Ray’s guidance I would argue that they would be average films at best.

Why was Ray able to transform potentially sappy material such as these (among others) and produce classics of American cinema? His visual storytelling, using the camera as an artist would a brush, is always impressive. But most importantly is the delicate way that he handled the themes that most interested him. Similar to how Howard Hawks would become a master at examining the bonds between men in nearly all of his greatest films, Nick Ray studied how outcasts managed to make their way in the world. The ability to convey an unrelenting sense of isolation permeates much of Ray’s work. Rather than being completely depressing, though, Ray also gives these characters glimpses of reconnecting with people or society at large. They might not always get there – such as Jim in Rebel Without a Cause or Dix in In a Lonely Place – but there is at least a glimmer of hope that they might.

I said it multiple times during the noir countdown, but revisiting a number of his best films increased my appreciation of his work even more. I still have a number of Ray films that I need to get to, which I think will shoot him even higher up a list like this. I still have not come close to seeing his entire body of work, but those top 6-7 are incredible. In a Lonely Place and Johnny Guitar are two that I love, love, love. And The Lusty Men is a definite sleeper, a film that will remind Peckinpah fans of his later movie Junior Bonner.

Next up is Danish master Carl Theodor Dreyer.
Posted by Dave at 12:05 AM