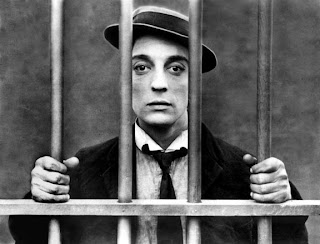 - “When we made a picture we ate, slept and dreamed them.”

Although we have had our spats in the blogosphere, this entry in my favorite directors series owes a nod to Wonders in the Dark’s Allan Fish. Before Allan began his epic countdown of his Top 100 films of the silent era, I wasn’t completely in the dark concerning the cinema of Buster Keaton. I was familiar with some of his more well-known features – The General, Sherlock, Jr., Steamboat Bill, Jr. – but as with most of silent cinema, I hadn’t really taken the time to fully delve into the work. The outstanding series at WitD, and the fantastic reviews posted daily by Allan, were the impetus needed. And while still far from being a Keaton expert, I have at least now made my way through his features and a number of shorts, and come to understand what I had been missing by putting off Buster’s work. I was already a fan of Keaton, and even before diving head-first into the rest of his career, felt certain that Sherlock, Jr. was the best silent film I had ever seen. I still stand by that bold declaration, but realize that he has a handful of features that are nearly just as good, along with an array of shorts that are equally as impressive.

Where does one even begin to praise such a titan of cinema? Keaton’s genius for comedy needs no explanation or analysis and I don’t know if I have enough knowledge to do so anyway. But it is still astounding to watch the physical gags and well-choreographed chases that he performed in his greatest films. Keaton has to be considered the first great stuntman of the screen. Even if his routines are not as harrowing or spectacular as they appear – and I don’t know enough about his production methods to say so – the fact that they come across as magnificently as they do speaks to the unmatched physical gifts he displayed in front of the camera. In an era when technology lacked far behind the creativity of many talented directors, Keaton was able to translate his wildly inventive scenarios into believable adventure-comedies. Watching him do things like clinging to the pistons of a charging train, dodging avalanching boulders barreling down on him, or fighting off deep sea creatures truly separates him from any of his contemporaries. Perhaps other comedians of the era were funnier, perhaps there were adventure stories that provided greater thrills (both debatable points), but I have personally never come across someone who combined the attributes as seamlessly as did Buster. In addition to being one of the greatest comedians of cinema, I think a case could be made for him being one of the earliest action stars.

What ultimately made the greatest impression on me is something that longtime fans of Keaton have probably known all along: for all the praise of his comedy and physical skills, his talent as a director is just as impressive. His films are not just plopping a camera down and taking in whatever the star does in front of it. Although Keaton is quoted as saying that he made his films without any scripts or written direction, I find it impossible to believe that there was not considerable planning and forethought given to how something would play out. If everything was purely off the cuff, then it’s even more impressive. Even so, Keaton clearly understood the possibilities that film provides and made great use of them. The celebrated dream sequence in Sherlock, Jr. feels just as fresh in today’s CGI-dominated movie world as it must have in 1924.

Below, I rate the Keaton that I have enjoyed so far. It clearly is not everything that needs to be seen in Buster’s career – I have seen all of the features where Keaton is generally accepted to have been the director and 14 of his shorts. There are plenty of other shorts that I still need to get to and I look forward to them. It should also be noted, that in some of these films (such as Steamboat Bill, Jr., The Cameraman and Spite Marriage) Buster is not credited as director, but it has been generally accepted that he remained the controlling hand. So perhaps it is cheating a little, but most critical analysis and histories accept Buster as being, at the very least, a co-director in these projects.