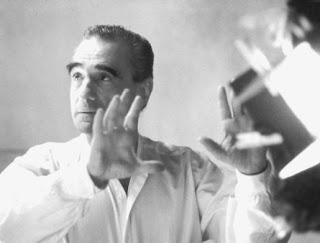 - “Cinema is a matter of what`s in the frame and what`s out.”

The inclusion is no shocker, although the fact that he did not place #1 might be. Just looking at the name of this blog should give away the fact that Martin Scorsese is not only one of my favorite directors, but also one of the most important in my development as a lover of cinema. He was the first director that made me consciously realize that I was watching a man who excelled at making crossover films – entertaining enough to appeal to a mass audience yet weighty enough for serious scholars and critics to sink their teeth into. It is no coincidence that this blog is named after my favorite Scorsese film. I watched Goodfellas as a kid who was obsessed with all things organized crime and was more interested in anything gangster-related than I was in movies. I came away completely obsessed with film. I knew nothing about technical achievements (and I suppose you could argue I still don’t!), but I was aware enough recognize the sensation that some of Scorsese’s skills produced – the legendary tracking shot at the Copa, the use of “Layla” while revealing the dead bodies. Those moments are what drew me toward appreciating films as more than just simple entertainment.

Really, that opening paragraph alone should be enough to justify placement in a personal favorites list. His films – and Goodfellas in particular – were and are that important to me. I relish each phase of his career. I love the early indie feel of Mean Streets and Who’s That Knocking at My Door? The middle period that produced classics like Taxi Driver, Raging Bull, and The King of Comedy is now the stuff of legend and justifiably so. The 1990s saw him produce what I consider to be the finest gangster film ever made and a number of intriguing genre exercises. Even now, when many are quick to dismiss him as over the hill, I find Scorsese in the last decade to have been spectacular – I still have so much fun watching The Aviator and remain in love with Shutter Island. At no point in my journey through Scorsese’s works have I found myself bored.

Knowing a bit about Scorsese himself, hearing him discuss how he personally fell in love with movies, is also very appealing. Watch any interviews of him discussing his favorite childhood films or admired filmmakers. He gets a glint in his eye when he recalls seeing The Searchers for the first time, or watching a Michael Powell classic like The Red Shoes. Like so many of his contemporaries in the “film school generation,” Scorsese is first and foremost a film fanatic. He loves everything about the cinema and takes great pleasure in drawing attention to his own personal favorites. I love this about Marty. I guess you could argue that this attribute really shouldn’t have an impact in a list like this, but I think it is essential to Scorsese. It fuels that passion that he infuses into all of his work. Someone who didn’t love movies as deeply as does Marty would not be able to keep this up for over thirty years.

His technical chops are well-chronicled, and I touch on just a few of my favorites in that opening paragraph. The talent to combine all of the elements of a movie – camera movement, actors, dialog, soundtrack, pacing – into one cohesive, all-consuming experience is his greatest strength. While this is a series devoted to my favorite directors, Scorsese’s longtime collaborator and friend Thelma Schoonmaker at least deserves credit for an assist, as without her continuing presence Scorsese’s films just wouldn’t feel right. In connection with his long association with Schoonmaker, it is also interesting to note the number of longstanding relationships that Scorsese has developed with various actors and personalities over the years, recalling other great directors that preferred using a stock group of players and associates. It is hard to ponder Scorsese’s career without also bringing to mind personalities like Robert De Niro, Harvey Keitel, Joe Pesci, Paul Schrader, and Leonardo DiCaprio.

This selection was never in doubt. The only drama came from deciding where in the Top 4 he would land. As for my list below, there will be one notable omission from my list – The Last Temptation of Christ. For whatever reason, I still have not seen it and have remained hesitant to do so. I can’t even explain why this has been the case, it simply has. I know many folks consider it be one of Marty’s very best, so I need to make a point of getting to it, which I will eventually. It should also be noted that depending on when you ask me, Goodfellas could be a routine choose as my all-time favorite movie.

Ask me to fiddle with the rankings tomorrow and Scorsese could very easily be #1. So keep that in mind as the remaining two are revealed. Even more so than in the annual countdown and noir series, these rankings are incredibly fluid.