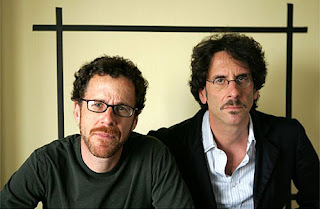 - “One of the pleasures of movies is creating a world . . . it gives you a license to do certain things.”

They may be among the preeminent visual stylists of this era, but it’s hard to deny that the greatest asset the Coen Brothers possess is their unparalleled writing talent. They are equally adept at writing the crass stoner comedy of The Big Lebowski or the casual philosophical wit of A Serious Man. They can write traditional drama equally as well, creating situations and dialogue in Blood Simple and No Country For Old Men. Then, of course, are their famed hybrids, films like Fargo or Barton Fink that aren’t straight comedy but aren’t straight drama either. All of their films have an undeniable “Coens feel” to them, but each one is varied from any of its predecessors. It’s easy to imagine that their scripts are so well written that directors need simply to follow them to a tee and positive results will ensue. In fact, I’ve heard as much in interviews. I remember seeing John Goodman talking about the making of The Big Lebowski and how the screenplay was so spot-on that no one dared change anything about it… even down to following the stutters and cadences that were written directly into the script.

Still, it’s impossible to deny the visual flair that their films boast. And I don’t say this in a Malick-like way, where every film just looks spectacular. Instead, each Coens film is unique, with an appearance that seems to perfectly fit the story being told. Blood Simple captured the gritty, B-noir feel of the murder plot. Fargo lets the snow whites of South Dakota wash over everything. The noirish The Man Who Wasn’t There boasts the best black and white cinematography of recent years. As a modern western of sorts, No Country For Old Men allows the landscape to be shown off through dusk-like lighting and photography. These are just a few examples, but it substantiates what I am saying. They are definitely more than just talented writers who happen to direct/produce.

Even when they are playing it straight though, there is a certain wit or cynicism lying just beneath everything. Like Billy Wilder before them, it’s easy to imagine Joel and Ethan sitting behind the camera with a sly grin on their faces. They are two of the few filmmakers where I have never once thought that they might be taking themselves too seriously. Perhaps they really do, but it never comes across that way to me as a viewer. Their films often seem to aspire toward a deeper meaning – or, perhaps, people are just quickly to look for such interpretations – but they never lose the sense of genuinely enjoying what they are creating.

My top choice is immovable, even if it is far from being their most critically-lauded or brimming with powerful statements. The Big Lebowski is so entertaining, I don’t care, and I still maintain that Walter Sobchak is one of the greatest character creations I’ve ever seen.