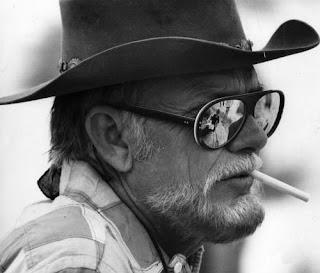 - “I loved Westerns as a kid, and I wanted to see if they held up.”

Like #14 in this series, this is another of my more recent interests. If this countdown had been done just a year ago, Sam Peckinpah would not have been included. My initial reaction to the man known as Bloody Sam, which came from watching his most acclaimed film The Wild Bunch a few years ago, was not as positive as I expected it to be. Perhaps I was still too much in a Howard Hawks frame of mind, as the opinionated director was on record as declaring that he didn’t think too much of the violent and frenzied action sequences that Peckinpah sprinkled throughout The Wild Bunch. Something just didn’t completely click – I liked it, but wondered what all the fuss was about. It’s amazing the transformation that one positive experience can bring about. All it took was one viewing of his notorious Pat Garrett & Billy the Kid to make me a believer. Going into it considering myself at best lukewarm toward Peckinpah, I came away from it completely floored. It still holds the power to transfix me ever time I watch it. That film showed me that the main criticism of Peckinpah’s work – that of it being little more than gunfights and bloodbaths – is completely off the mark. His admitted preoccupation with violence serves a purpose. But even more important, Peckinpah rarely gets the credit he deserves for the subtle, intimate touches he so masterfully intersperses with the violence. There are particular scenes in Pat Garrett and Bring Me the Head of Alfredo Garcia that are achingly beautiful in both their visual poetry and content. And these sequences deserve just as much praise as Peckinpah’s chops as a director and editor of action.

This key realization made me not only reassess what little Peckinpah I had seen before PG&BtK, but also to immediately go through the rest of his films. What I discovered was a director that has had me under his spell for months now. Many of his best films are not easy to love, requiring me to watch them multiple times before I felt comfortable with them. Peckinpah has emerged for me as a director with a unique worldview, using almost every filmmaking opportunity to deal with a specific set of ideals. Ideas of fearing death and violence, yet constantly courting it; of the ending of eras; the closing of the Old West; dealing with living past your usefulness. These obsessions constantly return in Peckinpah’s greatest works. Outside of Howard Hawks, no one ever dealt with the strong bonds of friendship between male comrades as did Peckinpah. You will rarely see me use the chic “auteur” label in my writings, but it feels so fitting when discussing Bloody Sam (sorry, I just love that nickname too much not to use it again!).

As you’ll see from the rankings, I’ve come quite a long way from my original assessment of The Wild Bunch. I still don’t rank it at the top of my list as most Peckinpah fans do, but my appreciation of it continues to grow. I wonder how many other people (and would love to hear thoughts on this) change their mind about a film(s) when revisiting it after having delved deeper into a director’s other work? This is precisely what happened with me and Peckinpah’s most famous western. The other thing about Peckinpah’s entire filmography that never ceases to amaze me is that despite how many financial disasters he made, his Top 10 films are consistently outstanding. Ordering may vary, but my guess is that most people will agree with the top ten, and there is not a subpar film in the group. I can’t go so far as to say that he never made a bad film, because later in his career he mailed it on a few duds. But those first ten are all outstanding. A number of them are ridiculously underrated – Major Dundee, even its butchered form, is near great; Cross of Iron is an overlooked war epic; The Ballad of Cable Hogue is irresistible. If I had to the guts to do it, I could easily place Cable Hogue all the way at #3. Before I saw Straw Dogs for the first time, I was led to believe that I might have the same problems I experienced with A Clockwork Orange. I didn’t – in Straw Dogs I actually cared to contemplate why the violence is taking place. The Getaway is sitting at #10, which might come across as a putdown, but it really isn’t. All ten are very good, some flat out great. A few of them I really struggled and went back and forth on while trying to place them. For instance – there were times when I felt both Bring Me the Head of Alfredo Garcia and Cross of Iron should definitely have been Top 5, but I still don’t feel like I have a complete read on either film, Alfredo Garcia in particular. It is such a beguiling movie, one that left me unsure whether I loved or it hated it after watching it.

So as you can see, the Peckinpah bug has really bitten me. These are movies that reward multiple viewings and that show him to be a much more complex director than he is often given credit for. And I’d give almost anything to be able to seen Noon Wine! Is it even available anywhere?