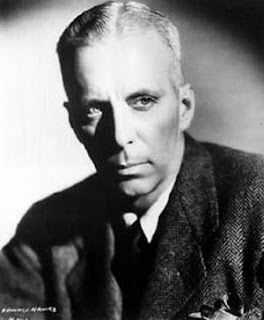 - “I'm a storyteller - that's the chief function of a director.”

His is the first name to come to mind when I think of the preeminent American-born directors of the classic Hollywood era. Many of his contemporaries, both in terms of time period and actual talent or stature, immigrated to America and then rose to dominate Hollywood – Billy Wilder, Frank Capra, Fritz Lang, Robert Siodmak were just a few of many who were born in Europe and rose to prominence in Tinseltwon. There were also many other outstanding Americans rising to prominence around the same time – indeed, other great American directors like Anthony Mann and John Huston have already been featured in this series. But in my mind, when I think of the archetypal American director of the period, it is always Howard Hawks.

What makes this such a natural belief is that Hawks not only dabbled in nearly every significant genre of the 30s, 40s and 50s, he produced all-time classics. His comedies of the 1930s are considered to be not only among the best screwball comedies, but some of the funniest movies ever made. Bringing Up Baby and His Girl Friday are routinely listed among the greatest comedies. His original version of Scarface in 1932 is arguably the best of the classic gangster films. The Big Sleep is among a handful of absolutely essential films noir that anyone wishing to familiarize themselves with the genre/style must see early in their quest. Air Force is as good as out-and-out propaganda films get. To Have and Have Not is as close as anyone would ever come to matching Casablanca. The Thing From Another World (which he is commonly assumed to have handled much of the directorial duties on) is a splendid piece of 1950s science-fiction and horror. Gentlemen Prefer Blondes is a musical comedy par excellence, which even someone like myself who normally has no interest in such films finds outstanding. And westerns like Rio Bravo and Red River are as incredible a one-two western punch as any director – Ford, Mann, Leone, Eastwood, anyone – ever made.

I could go on listing examples, but I think you get the point. There are other directors that can match his versatility, but I can count on one hand the directors who can match his mastery of such different genres and styles. Why was he so successful while moving in such varying fields? It might play like a broken record in these parts, as regulars here at Goodfella’s have heard me say it again and again, but Howard Hawks is simply one of the finest storytellers in the history of cinema. He might not have been a writer like other greats such as Wilder, Welles, and others. But he worked with a core group of writers that brought staggering talent to the page – Jules Furthmann, Leigh Brackett, Ben Hecth, William Faulkner – and whose screenplays inevitable possessed the characteristics that have now come to be recognized as “Hawksian.” Themes concerning friendship, professionalism, and seeing a job through to very end regardless of the consequences are the foundations of a Hawks drama. I still maintain that no one, not even the great Sam Peckinpah, ever handled ideas of bonding and close, intense friendship among male characters better than Hawks.

So with such versatility and excellence, it is easy to understand why I revere Howard Hawks. This is a placement that I almost regret, as I want to nudge him just a little higher. For now, I can’t as the competition is getting far too tough. Suffice to say that from this point on, the list could be inverted and I wouldn’t really quibble with the rankings.