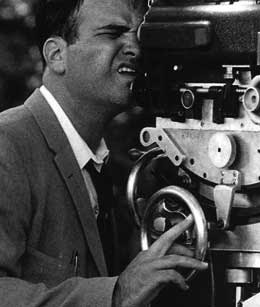 - “They’re not intellectual so much as they’re visceral. I don’t know how you explain it… they’re like poems, you know. You can analyze it to death, but it still is not going to get to what this poem is doing to you… to your psyche, your body, you know, it’s never going to solve that.”

Trying to find a quote about direction or film in general from the notoriously reclusive Terrence Malick is a nearly impossible task, so rather than scouring the ‘net looking for one, I thought that this statement from Days of Heaven star Sam Shepard would be the perfect opening to this entry. It comes from one of the extras on the recently released Days of Heaven Criterion Collection, as Shepard describes what drew him to working with Malick. Coming into the project as a writer, Shepard talks about how there was something magnetic in the script, something that pulled him to doing the project, and then attempts to describe Malick's films. And in ruminating on what it is about Malick’s work that maintains such a mesmerizing hold on so many people, he offers this fitting thought. It meshes so perfectly with my own feelings toward Malick’s work that I jotted it down the first time I heard it and vowed to somehow work it into this post.

If placing Francis Ford Coppola was the most difficult task of this project, deciding exactly where to place a man with just four total movies to his credit ran a close second. What exactly do you do with someone who has made only four films over the course of a nearly forty year career? On Thursday in the Coppola entry, I even touched on the fact that at this stage in the countdown that consistency and depth of quality films has to play a role. Such diversity is obviously lacking from a man whose workrate equates to roughly averaging one film released per decade. The issue is compounded by the fact that one of his four films is one that I have only recently begun to grow fond of. So while I might not be maintaining consistency when it comes to criteria in evaluating each director, such standards are irrelevant when I assess my passion for the cinema of Terrence Malick. It is a testament to the transcendent experience of his three films that I do love – two in particular retaining the ability to routinely give me chills at times while watching them – when I do not hesitate in giving Malick such a high placement.

Over the short history of this blog, I have written and discussed Malick’s The New World more than any other film. I’ll direct folks here, where The New World was chosen as my top film of 2005, if anyone is interested in seeing my full thoughts on that film. I also produced a similar post for Days of Heaven, which might not be as gushing as the ’05 entry, but also shows the love I have for that film. What draws me to films like this, which the uninitiated or non-Malick fans find so lumbering and inane? To answer this question, I ultimately return to the Sam Shepard quotation above. I’ve thought many times and can never quite put my finger on it. The more I analyze it, the less I feel like I can explain it. All I know is that Malick’s films have the ability to completely, totally transfix me. The incredibly beautiful images virtually hypnotize me. Even that explanation is an evasion, though, as for me it is more than just the gorgeous cinematography. Many people argue that Malick’s narrative technique leaves much to be desired, but the man has created some of the most powerfully moving drama I’ve ever experienced. The plague and wildfire of Days of Heaven; Witt’s death in The Thin Red Line; the reunion between John Smith and Pocahontas in The New World; and, most especially, the closing sequence with Pocahontas’ death – these scenes are so well done they give me chills. And so as Shepard says, no amount of analysis is going to pinpoint what it is.

Regarding the spectacular visuals in his films, I have written elsewhere about Malick concerning the credit he deserves in this area. Not knowing a whole lot about technical production, I’m always a bit hesitant as to who deserves the bulk of the praise for the look of a film – the director or the cinematographer. Malick’s case is unique though, in that he has worked with a different director of photography on all four of his films, yet all four of them look marvelous. This leads me to believe that Malick himself much be a significant factor in achieving these results.

Malick easily could be a Top 5 selection. Trying to separate favorites at this point is excruciatingly hard. Particularly in this instance, where a movie like The New World is continually inching toward being my all-time favorite film. Perhaps one or two more films like his recent releases and Malick will move toward the very top of a list like this. Bring on Tree of Life!

As a postscript, since I haven't talked about Badlands at all in this post, I thought I would pose this question to everyone. I re-watched it specifically for this series, which was probably the fourth time I've seen it. What struck me about it this time around was how dryly funny it can be. Kit's one-liners and retorts, the off the wall things he says out of nowhere, something about the entire storyline makes me view it as some sort of unique dark comedy. I've never viewed it this way before, but that is all I could think about when watching it this time.