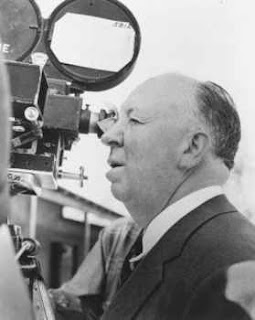 - “Give them pleasure - the same pleasure they have when they wake up from a nightmare.”

Perhaps it's a cop-out, or maybe I should just delay this posting as I did Billy Wilder's entry, but after the miserable week I have had I am just going forward now. As you'll notice, this is not a completely written out entry as all of the others have been. I had every entry to done well in advance, except for Hitch's, assuming that I would write it this week while posting the first two runners-up. Then I got sick to start the week and am only now beginning to feel human again. Even so, I'm still nowhere near 100% and have an energy level that is zapped very quickly.

Fortunately, though, there was not a whole lot of drama as to who #1 would be once Scorsese and Wilder were off the board. I've waxed lyrical about my love for a number of different Hitchcock films (Rebecca, Rear Window, Psycho), so I'll direct folks there if they want some more in-depth analysis. What I will add is that I tried to play out scenarios where the obvious choice of Hitchcock at #1 wouldn't happen... and I just couldn't do it. He has too many films that I love, a filmography too deep to be matched. I still need to better familiarize myself with his earlier British period, which will likely just increase my love of the Master of Suspense.

Once again, I apologize to end the series like this, but I'm assuming most everyone will understand. The important thing is that I'm on the mend and that everyone can now post their favorite Hitch lists!