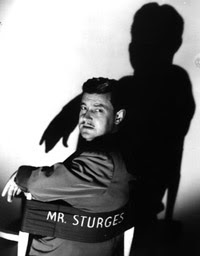 - “The most incredible thing about my career is that I had one.”

If there was a dark horse to sneak up and steal the top slot in this countdown, it was certainly Preston Sturges. As the series has progressed, I have gone back and forth over who will occupy that first position and in all honesty, I could make a case for each of the top four. In fact, at various times, I’ve floated the idea in my own mind of completing the countdown with each of them. In this case, it was hard to resist the temptation after re-watching all ten of the Preston Sturges films that I own. Sturges, Chaplin and Malick were the only directors that I did this for and it is no coincidence that this refresher course in each man’s oeuvre cemented such prominent placements. It reminded me that I have still not seen a single poor Sturges film, and even more importantly that his top eight pictures are infinitely enjoyable. Even having seen each of them multiple times, I never fail to laugh and smile in the same spots every single time and discover jokes that I overlooked in previous go-rounds. The writing is so well-crafted, the humor so witty and sly to try and slip things past powerful censors of the day; they are light comedies that actually reward close repeat viewings.

Sturges the man is almost as fascinating as the spectacular body of work that he created. His career path is a complete anomaly, not only because of the short window of time in which he shined but for how he entered the film business. Sturges began his career on Broadway, but even his stint there is unique in that he didn’t even begin writing plays until he was thirty years-old. After quickly finding success on the stage, movie executives came calling and lured him to Hollywood. Sturges spent the 1930s working as a writer-for-hire, penning a number of outstanding screenplays like Easy Living and Remember the Night. As wonderful as the dialogue and comedy are in those underrated films, though, it was the astounding seven comedies he made between 1940 and 1944 that account for the Sturges legacy. The legend of how Sturges managed to convince Paramount Pictures to let him try his hand at directing is one of my favorites. Knowing that he had penned a great script, Sturges took it to Paramount and offered a deal – he would sell it to them for only $1 on the condition that he would be allowed to direct it. The discounted The Great McGinty script was good enough to earn Sturges the first ever Academy Award for Best Original Screenplay and the film itself remains a classic. It kicked off arguably the most productive four year span from a director in Hollywood history.

It could be argued that Sturges is so well regarded more for his writing than his directing. When I consider his films, I think more of the humor and dialog of the screenplays than I do virtuoso camera movements or great visuals. But similar to my feelings toward Charlie Chaplin, I don’t think it’s necessary to separate the two components of his work. As Sturges himself would acknowledge, the fact that he wrote his own material was pivotal to his success. “I did all my directing when I wrote the screenplay. It was probably harder for a regular director,” Sturges would reminisce. “He probably had to read the script the night before shooting started.” So there is no question that the writing is integral. But I don’t think that Sturges the director should be completely overlooked. Aside from the humor of his dialog, his best films display a great deal of wonderfully choreographed physical comedy which would seem to require more than a sharp pen. His later classic (“later” in terms of Sturges’ career) Unfaithfully Yours is magically handled from a technical standpoint, weaving together dream sequences seamlessly.

In the end, it matters very little whether you want to specifically credit Sturges the writer or Sturges the director. He was the man at the helm of eight of the greatest comedies I have ever seen. He took the sophistication of Ernst Lubitsch, combined his own brand of screwball antics and situations, and the result was a uniquely Sturges mixture of laugh out loud hilarity, poignant social statements, startling sensuality, and tongue-in-cheek subversiveness. To me, Preston Sturges is at the very least the greatest writer-director of comedy to work in Hollywood in the sound era – if not in any era. His films never fail to make me smile.