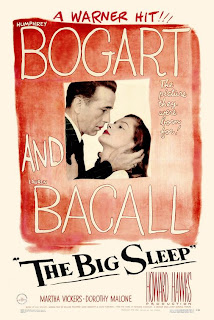 - “I collect blonds and bottles…”

OK, I’ll pose the question to you fine readers: Who did kill Sternwood chauffeur Owen Taylor? One of the most famous stories of Hollywood lore deals with this issue, as Howard Hawks and screenwriter William Faulkner (yes, that William Faulkner) couldn’t figure out how to explain this mystery. They figured they would go straight to the source and sent a wire to Raymond Chandler asking to solve the mystery for them. Chandler’s response? He didn’t have the foggiest idea. That story is apocryphal, but it highlights why The Big Sleep remains such an impressive film. Plot holes like this do nothing to damage the overall product. You don’t know how Owen Taylor was killed (even though I think I have a basic theory that works)? There are other details that don’t make sense? Who cares – there is so much fun to be had along the way that by the time you realize that some things aren’t adding up, it doesn’t really matter. 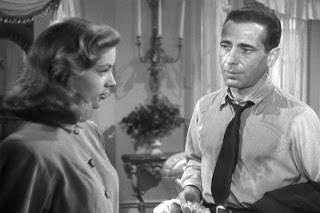 The story certainly is convoluted. It’s not necessarily incomprehensible, mind you, but it is likely to leave a first-time viewer scratching his or her head. The protagonist is Raymond Chandler’s legendary private eye Philip Marlowe (Humphrey Bogart). Hired by the rich General Sternwood (Charles Waldron) to investigate blackmail letters that are being sent concerning his youngest daughter Carmen (Martha Vickers). Carmen is a wild child who is known around Los Angeles as someone that paints the town and builds up massive gambling IOUs. Normally the General would have farmed the job out to his longtime protégé Sean Regan, but he has recently disappeared. Marlowe looks into the blackmailer, a bookstore owner named Geiger, which eventually pulls him into a maze that winds through the entire Los Angeles underworld. Along the way he also becomes involved with General Sternwood’s older daughter Vivian (Lauren Bacall), a vivacious and enigmatic socialite. Even as the two begin to fall for each other, it seems as if Vivian is constantly scheming behind Marlowe’s back.

The production history of The Big Sleep is equally as interesting and convoluted. Although not released until mid-1946, filming actually began in 1944 and was completed by January 1945. In Warner Brothers’ eyes, though, the timing could not have been worse. With World War II coming toward a conclusion, the studio had a number of war films in the vault still awaiting release. Fearful that if the war ended the audience would no longer be interested in war-themed films, they began to rush those to the screen and hold back movies that would not lose appeal by a delay. Thus, The Big Sleep was seen as a movie that could withstand such a wait. But by the time it finally was about to get its shot at the big screen, the Bogey and Bacall duo had become a wildly popular phenomenon. Jack Warner wanted to capitalize on this popularity and decreed that key scenes needed to be added or re-shot in order to do so. The end result of all this is that there are actually two versions of the film in existence – the theatrical release of August 1946 and the 1945 “pre-release” version, with slight variations between the two. Fortunately for modern audiences, the easily-obtainable DVD contains both versions, so each individual can form their own opinion as to which is superior. There aren’t necessarily any major differences, but I usually go for the theatrical cut whenever I watch it. 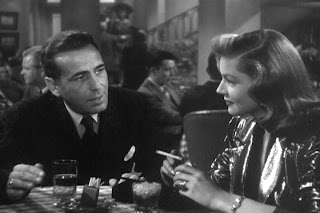 The reason I chose the ’46 version? The Bogey-Bacall interplay really was worth adding, even if it was the result of a studio dictating something to a director of Hawks’ stature. Although fans of Robert Mitchum can make a strong counterargument, there has never been a cooler on-screen presence than Humphrey Bogart. Whether he is playing Marlowe, Sam Spade, Rick Blaine, Fred C. Dobbs, or countless other roles, there is a an inherent hipness to everything that Bogart does. This is not to say that he is one-dimensional as an actor – the man could play damn near anyone. But there is certainly a “Bogart slant” to each of them. The closest I have ever seen in terms of a female possessing this same coolness is Lauren Bacall, whom Bogart married in 1945. So when the two are allowed to go toe-to-toe, they soak up every inch of the screen. Absolutely nothing else matters except the witty exchanges between Marlowe and Vivian. And, wow, what great exchanges they are. Raymond Chandler deserves huge kudos for the great dialog that he crafted in his original novel, but much praise also has to go to the incredibly talented screenwriting team in crafting the script. William Faulkner needs no introduction to anyone who has completed high school or read any American literature, and to any fans of classic cinema Leigh Brackett and Jules Furthman are close to writing royalty. Some of my favorite lines and exchanges:

Not just noirs, but film in general doesn’t come much more entertaining than this. It might not be as dark as other classic noirs, but it is such an entrained part of noir history that it is an absolute essential.
Posted by Dave at 12:05 AM