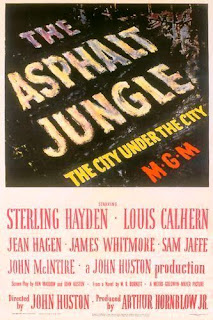 - “Crime is only a left-handed form of human endeavor…”

The countdown now comes to the movie which all post-1950 heist films can trace back their lineage. Whether it is The Killing, Reservoir Dogs, The Usual Suspects, or really any similarly themed crime caper, they all owe a debt to The Asphalt Jungle. Regardless of all of the fantastic movies that have come in its wake – and I consider the first two I just listed to be masterpieces – the argument can be made that The Asphalt Jungle remains the greatest heist film ever made. Watching it again made me rediscover why it was one of the first movies that I went into consciously aware of it being a “noir classic” and coming away completely satisfied. The Asphalt Jungle and Out of the Past are the two films that converted me into a noir junkie. So I take great pleasure in slotting The Asphalt Jungle into the Top 10 of the entire series.

Much of the originality of the movie might be lost on the current generation, or at least overlooked by those without knowledge of the omnipotent Hays Code that governed Hollywood productions. One of the key tenets of the Code decreed that “methods of crime were not to be explicitly presented,” which would seem to have prevented W.R. Burnett’s novel from ever being adapted for the screen. John Huston proved very adept at sidestepping potential Code violations – just watch The Maltese Falcon again if you don’t believe me – and once more showed that he could finesse a script and film into getting approval. Rather than focusing on the actual heist as the centerpiece of the film, the script from Huston and Ben Maddow instead make the focus on the disparate characters that make up the heist team. We learn about their lives, their struggles, and why they join the caper. This humanizing feature ran the risk of violating another element of the Code – that of portraying criminals in a sympathetic light – but this is deftly sidestepped as well. As any fan of noir knows, even criminals with the best of intentions, will eventually be made to pay for their lapses. 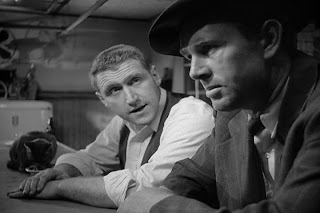 It is the classic heist gone wrong scenario. Recently released prisoner Doc Riedenschneider (Sam Jaffe) emerges from jail with a plan for an elaborate jewel heist. Realizing that he is going to need proper funding to implement the plan, he approaches high-profile attorney Alonzo D. Emmerich (Louis Calhern), a shady character who hovers around the underworld, to back him. He gets to Emmerich through rising bookmaker Cobby (Mark Lawerence), who is also drawn into the plan. As further muscle is needed, they begin bringing in more hoods. Hunchbacked knockaround Gus Minissi (James Whitmore) is hired as the wheelman and he in turns brings aboard Louis Ciavelli (Anthony Caruso) to crack the safe. Completing the team is struggling hoodlum and tough guy Dix Handley (Sterling Hayden), whom Doc personally chooses after liking what he sees from Dix in interactions with Cobby. What transpires as a result of the intricate planning is a heist that barely succeeds and then a minefield of plotting and double-crosses to see who will end up with the hot jewels.

Every key player in the film can make a legitimate case to turning in the best performance. I won’t declare this Hayden’s best performance – he has far too many memorable noir personalities to his credit – but in Dix Handley he perfected the kind of good-natured thief that so many other actors of the era strove to achieve. Doc Riedenschneider’s calm, calculating nature is unforgettable and Sam Jaffe infuses him with the necessary iciness. Mark Lawrence’s Cobby is the shifty, nervous bookie that is hard to ever get a handle on. James Whitmore makes Gus, the ever-loyal underworld everyman, as sympathetic as a wheelman has ever been. And tying it all together, pitting himself against everyone else, is Louis Calhern as Emmerich. It’s a unique performance in noir, to portray the powerful crime lord as a timid lawyer, but Calhern has the kind of distasteful regalness to make it work. Although the studios tried to make it seem otherwise after her bursting popularity, Marilyn Monroe plays the most minor of roles here. 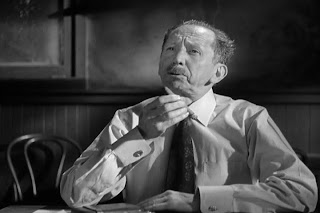 What is so humanizing about these men are the bonds formed between the criminals. What everyone will notice is that the major scheming comes from the semi-legitimate attorney. He thinks that he can outsmart the smalltime crooks and make off with the jewels himself. But the true street guys – men like Dix, Gus, Louie and Doc – quickly develop bonds that seem unbreakable. They are not going to turn on each other. To do so would go against the codes that they have lived by. This lasting loyalty is responsible for some of the best scenes in the entire film. Gus, in particular, makes you forget that he is a career criminal – he just seems like a friend who would always go to the mat for those that he cares for. It is wrenching to watch him listening to the screams of longtime friend and partner Louie, shot through the belly and dying after the robbery. Although not as dreadful, I also love the scene when Gus scrambles to get hold of Dix to warn him about impending police raids. He speaks as rapidly as he can, ignoring the approaching patrolmen, realizing that he is going to get picked up but not wanting to leave his partner in the lurch. Is this a romanticized reading of criminal actions and loyalty? Sure it is, but I am forever fascinated by any strong bonds of friendship, particularly when the stakes are as high as they become in this film.

Huston’s direction is brilliant, particularly in the lack of flourish in the robbery. The robbery sequence here never comes close to matching the technical genius of the later Rififi, but it is used for an entirely different effect. The entire thing takes about ten minutes of screen time, which means sharp bursts intensity rather than the seething anxiety in Rififi. The aftermath of the theft, as a perfectly-planned robbery fails due to the kind of squabbling and backstabbing that plagues all street criminals, is what is most important. This aspect – along with some mandated moralizing from the police commissioner – is likely why censors green-lighted the movie to begin with. But with Huston guiding it, the criminals being brought to justice one-by-one never feels like a copout. It feels like a noir should. 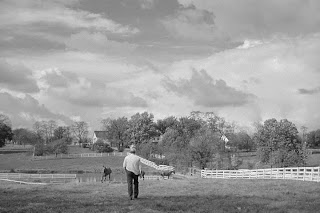 Add in classy photography from Harold Rosson and a very impressive score from Miklós Rózsa and you have an all-time great movie, with one of the classic closing shots in all of noir. It is not the best film in the countdown, but I fail to see a glaring weak spot in the entire thing.
Posted by Dave at 12:05 AM