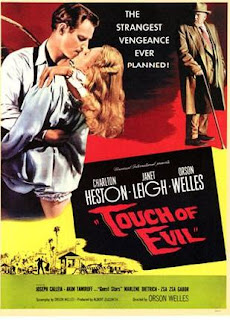 Let’s get the bad out of the way right up front – I still cannot believe that Universal decided to cast Charlton Heston in the role of a Mexican detective. It makes no sense to me and seems like a completely unnecessary distraction. Now, with that being said, there was a time, very early in my noir obsession, where Touch of Evil would have contended for the top spot in a list of this sort. After watching it for the first time I came away convinced that not only was this one of the handful of best noirs of all time, but that it was undoubtedly the best film that Orson Welles ever made, above even the more critically-acclaimed Citizen Kane. This initial reaction, at least in terms of placement in Welles’ overall body of work, was probably more a result of responding better to crime thrillers like this than the straight drama of Kane. I’ve since amended my view somewhat – I now conform to the general opinion that Kaneis not only his greatest film, but his best – but in terms of noir rankings, my initial assessment wasn’t far off. It is lower on the list than it once was, but this is due to becoming familiar with other great noirs, not losing my love for Touch of Evil.

The story jumps all over the place, and if it is not as compelling as the actual moviemaking, it is at least entertaining. When an American millionaire is blown up crossing the border back into the United States from Mexico, an immediate full-scale investigation is launched. The American authorities, led by the legendary Hank Quinlan (Orson Welles), are in charge of the investigation, but since the bomb was planted in the car on Mexican soil he is forced to work with Mexican detective Mike Vargas (Charlton Heston). What would normally be routine inter-agency cooperation is complicated due to Quinlan’s unmitigated bigotry, as he detests all things Mexican. Vargas’ concentration is tested by the fact that members of the infamous Grande family, whom he is prosecuting on drug charges, are harassing his wife (Janet Leigh) in hopes of intimidating Vargas to drop the case. Vargas is forced to try and protect his wife from the Grandes on one hand, while at the same time try and keep Quinlan from framing innocent citizens in the bombing case. 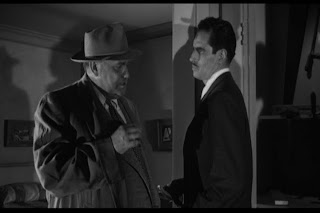 Touch of Evil was Welles’ first return to Hollywood filmmaking in a decade, after having spent that time working in Europe. The circumstances concerning how he came to be hired to direct the film have never been completely clarified, but legend has it that he was originally hired just to play the role of Hank Quinlan. Universal had already zeroed in on Charlton Heston to play the lead (again, for some completely unfathomable reason), but he was wary of committing to a project without knowing who would be directing. When he learned that Welles had been hired as an actor, Heston told Universal that he would sign on if they also allowed Orson to direct. Universal complied, agreeing to allow Welles to rework the script and then lead the project. The irony of it all is that Welles returned to Hollywood and ran into the same problems that he experienced during his initial run in Tinseltown. After wrapping production, Welles delivered a cut to Universal that he felt was strong enough to resurrect his career in the States. As happened with almost every film he ever made, though, the studio disagreed. Universal decided – supposedly without the knowledge of Welles himself – to reedit and re-shoot parts of the film, trimming it to just over 90 minutes. When Welles saw the hacked Universal product he was distraught, firing off a 58-page memo to the studio heads in which he outlined the changes he thought needed to be made to the film. Universal ignored nearly all of the suggestions, released the movie in its bastardized form, and it promptly floundered. Thankfully, that memo and a longer cut were rediscovered decades later and were used to produce the “restored version” that is now accepted as the closest to Welles’ vision.

Would it have been too cliché to have begun this review talking about the famed three-minute tracking shot that opens the film? I thought so, so I purposely waiting until now. There is no denying its brilliance. What strikes me about it is the impeccable decision making by Welles and cinematographer Russell Metty. We see the bomb loaded into the trunk of the car and then see it pull out and begin driving toward the border. But the camera does not simply trail the car, watching it the whole way. Welles lets it move like normal, slowing down and speeding up as it moves through traffic. At times, the car goes completely off-screen, as the camera focuses on the Vargas couple walking in the same direction. The car is then picked up and lost a few more times along the way, but it can be identified when it comes into view thanks to the distinctive music coming from the radio. The whole thing is pulled off in such a carefree manner. It is the crowning achievement of an all-around technical masterpiece. Welles and Metty are brilliant throughout, throwing dark (and I mean dark) shadows over everything. They even venture into psychedelic territory with hallucinatory sequences involving Vargas’ wife and the Grandes. 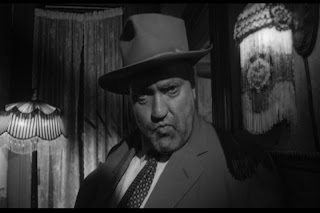 It also features what I view as Welles’ best acting performance. His Hank Quinlan is unforgettable, as is this butchered maseterwork that has thankfully been restored (at least as near as possible) to the original vision of a genius.
Posted by Dave at 12:05 AM