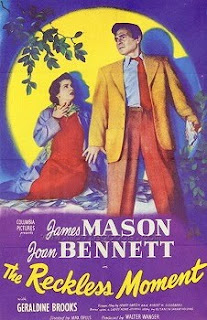 If anyone could take a run of the mill murder cover-up tale and transform it into a multifaceted, emotionally charged experience it would be the great Max Ophüls. Known best for his longing, romantic films, Ophüls would not be the first name to come to mind when remembering directors with the ability to craft tense or suspenseful crime dramas. While still a greenhorn in terms of Ophüls’ overall body of work, what I have come to realize is that the amount of talent that the man possessed as a visual storyteller is so great that it can never be underestimated. He was such a professional, with the ability to do virtually anything that he wanted with a camera, that genre would never be a constraint. Perhaps he rose to greater heights with his romantic films than in noir territory, but he made masterpieces in both fields. With Ophüls at the helm of The Reckless Moment, an average blackmail-themed film becomes a noir classic.

Ophüls came to Hollywood as a result of trying to stay one step ahead of the Nazi Party and its rise to power in his native Germany. He came to prominence in his home country in 1933 with the release of Liebelei, which won him great critical acclaim. The timing could not have been worse for a Jewish director, as this was the same year of the infamous Reichstag fire that allowed Hitler and the Nazi Party to consolidate power in Germany. Seeing the writing on the wall, Ophüls left for France and went on to make a number of films in that country, the Netherlands, and Italy. His career was interrupted again, though, when France also fell to the Nazis in 1941. This is how he ultimately ended up in the United States, and after a short period of wandering and looking for work, eventually made his four film cycle over a short three-year period. While I am not familiar enough with his complete filmography to judge quality, based purely on reputation it seems unfair to compare these Hollywood efforts to his most acclaimed efforts like Madame de…, La Ronde and Lola Montes. But of those four films, he made at least one (Letter from an Unknown Woman) that is a bona fide classic and two noir greats. So while his Hollywood run may not always be highlighted, it is incredibly impressive to consider what he accomplished in such a short stint there. 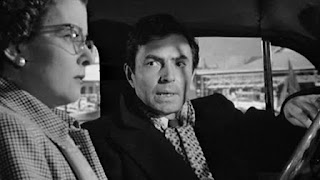 Joan Bennett stars as Lucia Harper, an upper-class California housewife who desperately wants to break up the relationship between her teenage daughter Bea (Geraldine Brooks) and a much older shady character named Darby (Shepperd Strudwick). When Darby visits Bea late one night at the family home and a struggle ensues, Darby ends up dead and Lucia assumes that her daughter killed him in a struggle. Moving quickly to dispose of the body and any potential evidence, Lucia instructs Bea to push everything from her mind and forget what happened. Hiding the incident from the rest of the family and from her traveling husband, Lucia hopes that no suspicion will fall on the family. Any hope of that is shattered when she gets a visit from Donnelly (James Mason), a minion for a loanshark named Nagel (Roy Roberts). Unknown to Lucia or Bea, Darby had sold Bea’s love letters to Nagel. When the loanshark learns that police are investigating Darby’s murder, he sees a financial opportunity. He sends Donnelly to extort money from the Harper family, knowing that release of the love letters could seriously implicate Bea in Darby’s death. The extortion scheme is complicated, though, when Donnelly begins to discover feelings for Lucia. Not wanting to see a family destroyed, Donnelly turns on his employer and begins to work to help save Lucia and the Harpers.

Joan Bennett and James Mason (who was making only his third appearance in a Hollywood production) give performances so strong that they are really the only ones that matter. It’s interesting in how the two lead characters are portrayed. The moral ambiguity actually comes from Mason, the underling of the menacing Nagel. But almost from his introduction, Mason’s Donnelly is portrayed not as a brooding hoodlum as one would expect, but actually a compassionate human. And the personality and mannerisms of James Mason are perfect to pull this off. Bennett’s Lucia, on the other hand, portrays characteristics that would more expect from the criminal element – mainly I am referring to her determination to conceal a terrible crime. But the empathy that one feels toward Lucia is a result of that determination actually being admirable. She is a mother doing whatever she can to protect her children. It is what anyone would hope that a mother would do, but in the case of Lucia it is against forces that are larger and more sinister than one thinks a housewife would be able to handle. 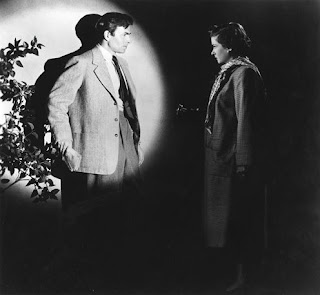 No matter how the performances come across, the stars remain Ophüls and his brilliant cinematographer Burnett Guffey. Before looking into the movie after watching it the first time, I was completely unaware of the fact that Guffey was director of photography on this one. I knew him primarily from his work done in Bonnie and Clyde which came eighteen years later, but feels like it was generations in the future. The deeper I plunged into noir, I realized that he also shot a number of other great noirs as well, showing that he too was a very versatile stylist. Guffey and Ophüls complement each other wonderfully. Like many, I didn’t know if Ophüls gracefulness would translate well to noir, but his gorgeous camera movements are accentuated to perfection by Guffey’s use of light. From the few Ophüls films that I have seen, I immediately know that he is in the director’s chair once the camera starts moving as if the man were a deity in control of every element on the screen. He essentially does the same thing here, sweeping the camera across various lights, darks, shadows, and landscapes that Guffey composes. It is yet another technical gem from Max Ophüls. This technical grace is used to tell a dark story, resulting in a truly great film.
Posted by Dave at 12:05 AM