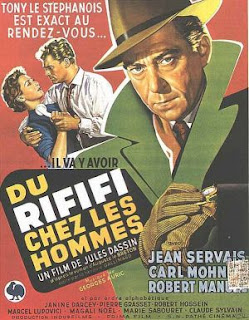 - “I liked you, Macaroni, but you know the rules…”

In the long line of great heist films – one of which have appeared just two days ago – one of the most common nominees as the best of them all is this French noir from expatriate director Jules Dassin. But to pigeonhole it with such a designation is to overlook the true scope of this amazing film. The jewel heist definitely serves as the centerpiece of the story, but it is only an action-starter that allows Dassin to explore themes that he so often examined – the ideas of the strong bonds of friendship, honor among thieves, and, even more powerfully considering the course of Dassin’s own life, deception and double-crossing. The trials and tribulations of Dassin have already been discussed in previous entries for his films in this series, but it is worth pointing out that his experiences with HUAC and being chased from the United States still appear to have been a major influence on his work in 1955. I am not arguing that they served as a direct inspiration for a movie like Rififi, but the same darkness and cynicism that became even more apparent in his work when he first left the United States remained at the fore in making this film. 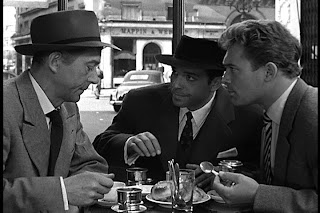 The protagonist of the film is Tony le Stéphanois (Jean Servais), a career hoodlum recently released from prison after serving five years. His longtime partner Jo (Carl Möhner) and associate Mario (Robert Manuel) approach him with a plan for a major jewelry heist. Tony at first rebuffs the offer, saying they could never pull it off. Later that same night he goes to see his former girlfriend Mado (Marie Sabouret), who has taken up with rival gangster and nightclub owner Pierre Grutter (Marcel Lupvici), and after a violent confrontation with her Tony changes his mind about the robbery. But he argues that rather than just taking the jewels in front displays, the gang should break in and hit the central safe. Concocting an even more elaborate plan, and bringing in safe specialist Cesar le Milanais (Jules Dassin), leads to one of the great on-screen robberies ever filmed. The robbery goes well, but the aftermath is a disaster for all involved. Tony’s rival Grutter learns that the gang was behind the sensational robbery and sees an opportunity to make off with the loot himself. Kidnapping Jo’s five-year old son, they hold him for ransom and demand that the jewels be turned over to them. Tony and Jo thus begin scrambling to find a way to save the boy and their score.

The central heist sequence is rightly celebrated for the skill with which it is filmed. For nearly a half-hour, Dassin utilizes almost no dialog and just sets the camera in places to watch the thieves work. It is satisfying to watch, because for the forty minutes leading up to this point, the audience has watched all of the preparation and planning that went into the robbery. It sounds bizarre to call it “satisfying” to watch hoodlums pull off an elaborate robbery, but it really is. Perhaps the satisfaction is derived from the realization that Dassin is keeping you enthralled for such a long stretch without any unnecessary dialog or tricks. And the silence makes the entire sequence so incredibly intense, it is impossible not to be on the edge your seat the entire time. Since you have seen the planning, you know what they intend to do. But having it come off without a hitch is another animal entirely. So when the men look at each other nervously as they try to silence the alarm or dig through the ceiling, you as the viewer are just as on edge. 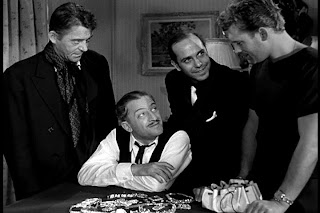 With all that being said, it isn’t the heist scene that keeps me coming back to this film. That sequence never fails to impress me, but it’s not something that I would necessarily watch on a continual basis for sheer enjoyment. What engages me most about the story is the code by which these men live by. The underworld code is something that is almost more important to a man like Tony than is life itself. It is a world where partners are supposed to look out for each other. If one hood can help another, he should, even if that means taking the rap. Those that are arrested must keep their mouths shut, no matter what. And the penalties for breaking any of these tenets are severe. The sense of brotherhood and camaraderie that exists among those that share this distorted set of ethics like Tony, Jo, Mario and Cesar, is what makes the story so compelling. They all know the rules – paraphrasing what Hyman Roth would famously say twenty years later, this is the life they chose. Still, there is great drama in seeing a scene like the one in which Cesar, having ratted out his partners after being tortured by Grutter, apologizes to Tony for succumbing to the pressure. Tony nods, understanding, but knows that he has to avenge the betrayal. Equally as memorable is the scene when Mario and his wife are tied up and interrogated by Pierre and his henchman. The sudden change of heart from Mario's wife is unforgettable. 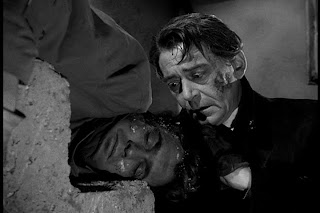 Rififi looks and feels precisely how a film noir should and it remains my favorite film in the illustrious career of Jules Dassin.
Posted by Dave at 12:05 AM