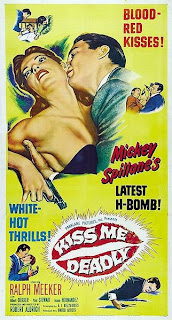 As is the case with most cult movies, it seems that viewers either love Robert Aldrich’s Kiss Me Deadly or find it too over-the-top to take seriously. Where I fall on that spectrum is obvious – I think Kiss Me Deadly is one of the best movies I’ve ever seen. It is a film that stands alone, meaning I can think of few others to really compare it to. Certainly it shares stylistic traits with other great noirs, and the general storyline contains a mystery that will feel familiar. But the apocalyptic nature gives it a flavor all its own.

My thoughts after watching it again are similar to this review from the annual countdown. The expert pacing used by Aldrich once again stands out to me. Never has the paranoia and obsession of a lead character been so skillfully thrust directly onto an audience. Watching the film, you feel exactly like Mike Hammer does – intrigued, feeling perpetually on the verge of solving the mystery, yet never fleshing everything out until it is too late. By the time he (and we as the audience) figures out what is being sought, it is too late to realize that it is not something that he should be so eager to find.

This is a “desert island film” for me, which is ironic because the ending supports the idea of a couple of folks ending up alone on some sort of remote island!

Kiss Me Deadly remains overwhelming in the number of different ways that it can be enjoyed. It is a movie that contains enough action and entertainment to be enjoyed as your usual noir thriller, yet is also meaningful enough to be analyzed for its cultural significance. The first time that I ever watched it, I came away as a fan of the film, looking it as a slightly above average private eye noir. Comparing it to other similarly structured films, I found it to be good, but wasn’t nearly as enthusiastic about it as I am now. I put it aside and carried on with other films before coming back to it a few years later. When I returned to it, now more familiar with the context in which the film was made and its impact on the course of cinematic history, my appreciation skyrocketed. I quickly realized that I wasn’t simply watching a hardened variation of a Raymond Chandler story. In fact, as I’ve come to view it, this story actually plays as something of a swansong to that era of stories and characters.

Opening with one of the most classic of opening sequences, a woman in a trench coat is seen running down the middle of a highway. Standing in front of an oncoming car in order to force someone to stop, she causes private detective Mike Hammer (Ralph Meeker) to run his convertible off the road. While giving her a ride to the nearest gas station, Hammer quickly realizes that his new passenger has escaped from a mental hospital and is wanted by authorities. She (Cloris Leachman) convinces him not to turn her in, hauntingly imploring him to “Remember me” if things go wrong. They of course do, as the car is overtaken by assailants and the girl is killed. Hammer manages to survive, waking up in the hospital after spending three days in a coma. 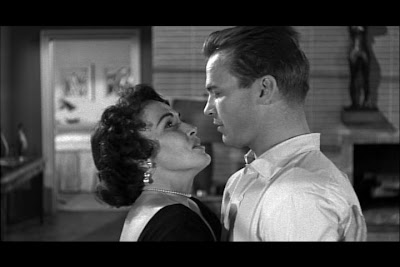 Hammer emerges from the hospital curious as to the circumstances that led to the girl’s death. His interest is further piqued when both law enforcement and underworld personalities begin probing him for information about what the girl may have revealed to him. Rather than focusing on the usual divorce PI work that he uses to make his living, Hammer and his secretary/sometime-girlfriend Velda (Maxine Cooper) begin following any leads on the mysterious girl. The more tantalizing the potential lead, the more obsessed Hammer becomes with unraveling this mystery that no one appears to know the answer to. Following this trail brings Hammer into contact with a wide range of characters, from the girl’s supposed former roommate Lilly Carter (Gaby Rodgers), to underworld heavies like Carl Evollo (Paul Stewart) and his henchman Sugar Smallhouse (Jack Lambert) and Charlie Max (Jack Elam). For all of the leads that Hammer appears to continually be uncovering, he somehow never seems to get closer to the truth – until it’s too late for him to decide whether he really wants to discover that truth. By the time that Hammer finds a mysterious black box, which appears to harbor a substance or force of unspeakable power and intensity, events seem to have spiraled out of anyone’s control.

The fact that Kiss Me Deadly was made toward the end of the “classic” film noir era is unsurprising, as it plays like a rejection of so many of the central tenets that characterized the genre. Whereas Sam Spade and Philip Marlowe may have been poking their noses into places they didn’t belong, in the end they proved themselves to be valuable as they busted crime or saved others from harm. Mike Hammer sees himself in a similar light, acting as if he is the only person who can truly resolve the mystery of what happened to Christina Bailey and what she was trying to hide. No matter who tells him to leave it alone – the police, gangsters, his friend and close confidant Velda – Mike thinks that he can find justice for any wrongs that have been committed. With every tidbit of information he receives, Hammer becomes more intrigued, always appearing to be on the verge of grasping what it is that he is chasing, but never quite unmasking the truth. What he fails to realize is that in his pursuit, he is causing even more damage in the process, and is setting off a chain of events that will lead to catastrophic consequences. When Mike finally does realize that this is what is happening, it’s far too late for him to reverse course. The mysterious black box has already been discovered, there are already other people who covet whatever it is that the box represents, and there is no way for the box to be discarded or forgotten.

The brilliance of director Robert Aldrich in this film is that he shoots the film to make the audience feel the exact same thing. Until becoming fully aware of what is happening (which took me more than a single viewing), the viewer is going to approach the mystery of the story in the same way as Mike Hammer. Each new bit of evidence is seen as bringing us one step closer to discovering why such sinister men were hell-bent on silencing Christina. And with each new clue, we too feel like we might be able to guess what is going on. It never happens. The audience realizes the stakes involved at the same time that Hammer does, and as I said, at that point there’s no turning back. The conclusion is still stunning today, even when it becomes obvious what is going to happen. Right up until the explosive finish, I kept thinking "He's really not going to end the movie like this is... is he?". It works the whole way, which also shows how strong the script from veteran A.I. Bezzerides is. To have something this outlandish and over-the-top come across so well is a testament to strong writing. Robert Aldrich would go on to much more financially-successful endeavors and would direct films that were much more popular with the general public (The Dirty Dozen, Whatever Happened to Baby Jane?), but this B-movie masterpiece is undoubtedly his artistic zenith. This film is stylish to the max, as Aldrich and cinematographer Ernest Laszlo experiment with camera angles and different shot structures. It is little surprise that this film would go on to be a major influence on the French New Wave in the coming years. Aldrich and Laszlo combine to wonderfully capture the gritty feeling of Los Angeles, making every setting and character have a seedy quality. There is also a realization is how adept Aldrich is at handling violence. Filming at a time when explicit displays of violence was not acceptable, Aldrich had to get very creative in order to get across the viciousness of the sequences of events that Hammer is a part of. Simply, yet highly creative shot compositions are able to make otherwise benign sequences become absolutely chilling. The greatest example comes very early in the film when Christina and Mike are captured by the unnamed assailants. The men are torturing Christina, trying to find out what she revealed to Mike. As they are working her over, all the camera focuses on are her feet. We see her feet squirming as she struggles to avoid the pain. When a bloodcurdling scream is heard and the feet give one final anguished jerk, it is clear that the young girl has been killed. Without seeing one drop of blood or a single second of the interrogation, Aldrich still manages to startle the audience. 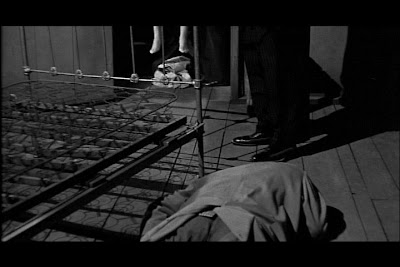 It is film noir meets Cold War paranoia, which likely sounds like the recipe for a horribly cheesy movie – and in most cases it would turn out this way. Fortunately, Aldrich never allows the film to slip into such territory. Some still argue that the film feels dated, and even if that point is conceded, it does nothing to detract from its greatness. If it’s dated, it’s dated in the same way that The Beatles’ Sgt. Pepper’s Lonely Hearts Club Band is dated – meaning that something similar isn’t likely to be made any time soon, but that it’s still better than almost anything else likely to be produced. Even so, I would argue strongly that the film most definitely is not dated. While the makeup of world politics may have changed in the fifty years since its release, the tendency for people and groups to deal in absolutes has not. There are still segments of society who refuse to see things in any way but there own or to follow any course of action but the one that they are certain is right. As is the case with Mike Hammer, this oftentimes can serve to make things worse. This is still a relevant film, with themes that can be applied to circumstances other than the Cold War.
Posted by Dave at 12:05 AM