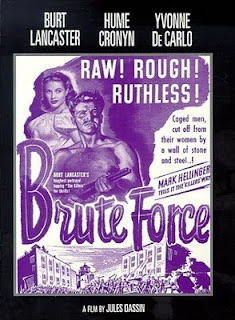 - “Nobody escapes. Nobody ever really escapes…”

This 1947 release from master director Jules Dassin may be the most aptly titled film in the entire countdown. It is a rough, brutal film that really never offers any hope of redemption. The prisoners that inhabit Westgate Penitentiary daydream about past lives and long for the day when they can resume the careers and women that they left behind, but even the romanticized memories never seem realistic. Everyone knows – even if they refuse to openly admit it – that for most of them, exiting the prison is never going to happen. How do people live under such strain? And when such desperate men are provoked, how far will they go to try and break free? Richard Brooks’ script explores these questions as well as any prison drama of the era. It is also interesting to note that Brute Force proves that Dassin did not begin adding large doses of despair to his films only after being chased to Europe by the House Un-American Activities Committee. Night and the City, made while avoiding subpoenas in Hollywood, may very well be his most hopeless film, but Brute Force is not much more encouraging. In different ways, both films explore the lengths to which desperate men will go. 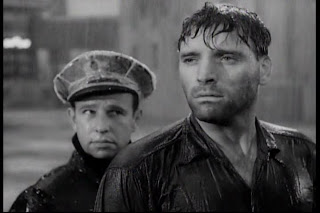 Save for the reminiscences of inmates, all of the action takes place within the walls of Westgate Penitentiary, a prison that is ruled with an iron fist by the sadistic prison guard Capt. Munsey (Hume Cronyn). The warden is a weak man, powerless to do anything to maintain order in the prison, and so he relinquishes all control to Munsey. The result is that prisoners are beaten and tortured into submission. When a group of roomies in cell R17 become fed up, they begin to put together an elaborate escape plan. Their leader, tough, charismatic Joe Collins (Burt Lancaster), instigates the plan when he learns that his ailing wife Ruth (Ann Blythe) will not go forward with a necessary operation unless he is there by her side. So Joe begins planning an escape that will involve a number of accessories, both willing conspirators – Gallagher (Charles Bickford), the respected head of the prison newspaper – and unwitting – Dr. Walters (Art Smith), the prison physician. As things progress, Capt. Munsey begins to get an inkling about what is happening and is determined to foil the plans before they unfold. It then becomes a race to see if Joe and his compatriots can pull it off before Munsey is able to torture or coerce the whole plan out of other inmates.

As anyone who has followed this countdown will now know, I’m a big Jules Dassin fan. This is his third film to appear in the countdown, and as a teaser for future entries, this will not be the last time that he is heard from. The Dassin films that receive the most praise, though, are the ones that come _after_ this masterpiece. Brute Force seems to get lost in the shuffle of the great films he made over the next decade or so, which is a shame because there are times when I think that it might be my favorite film that he ever directed. This is filmmaking of the highest order, with Dassin in absolute control of everything. Rather than single out individual scenes, it is more like entire passages of this film never fail to impress me. As I said, the bleakness of everything is always lurking, but Dassin also manages to create more lighthearted moments in such a harsh setting. Some of the finest moments in the film are when prisoners in the crowded cell R17 are staring at the pinup girl on the wall and recounting the women they romanced on the outside. The key cellmates all begin to reminisce about the circumstances that led to their arrests and imprisonment, with the flashbacks done in a very dream-like, romanticized way. It is like each person is admitting that they probably did do something wrong, but don’t want to come out and admit that their crimes warranted being put where they are. 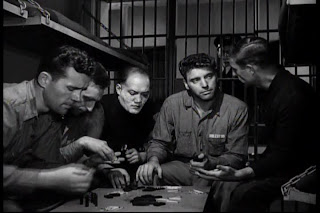 Those endearing moments, though, are not enough to make anyone ever forget about the brutality that saturates every inch of the prison. The action sequences are flat-out hard, with many memorable scenes. How can one ever forget the vigilante justice doled out by the prisoners on the stool pigeon? It is an assassination scene that outshines any I can think of in the entire era. Or, even more unforgettable, is the methodical way that Capt. Munsey goes about mercilessly beating prisoners. He remains completely stone-faced through it all. Dassin and cinematographer William Daniels use a lot lighting from below, which creates otherwordly shadows that give an even greater uneasiness to things unfolding in the prison.

Hume Cronyn and Burt Lancaster give great dueling performances as their two characters go toe-to-toe. It is interesting to see Cronyn cast as such a vicious character, as he seems much more ideal for the sly, conniving shyster type, such as in The Postman Always Rings Twice. Lancaster is well-established as one of the greatest stars in all of noir, and while his Joe Collins might not quite reach the level of his roles in other classics like The Killers and Criss Cross, it is still of his usual high quality. 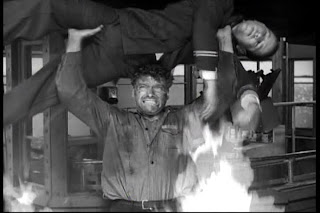 I won’t make my usual “underrated” assessment, because most people I have seen discussing it regard it as a very good film. But I do think that it pushes close to the best movie that Jules Dassin ever made.
Posted by Dave at 12:05 AM