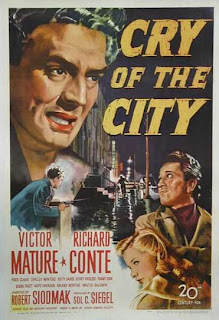 There are many films in this countdown that have received no proper DVD release and that require herculean efforts just to be able to see them, let alone have your own personal copy. If there is one film in the series that I would place at the top of a list of movies I want to see receive a proper DVD release it would undoubtedly be Robert Siodmak’s all but forgotten noir treasure Cry of the City. I have personally been reduced to scouring eBay and ordering a release from Brazil that I just hope will play on my Region 1 DVD player. I know that this has happened to many other essential movies throughout the history of cinema, but how a film this great can be so thoroughly ignored by those that own its rights is mindboggling. Robert Siodmak is one of the top directors to ever make noirs and Cry of the City is on the same level as his other recognized treasures – The Killers and Criss Cross included. Those two have outstanding DVD releases, while Cry of the City languishes in relative obscurity. If it wasn’t for the Internet, I never would have seen this one to even consider it for the countdown.

And this is prime era Siodmak noir, situated between the two classics that I just mentioned – two years after The Killers and only one year before Criss Cross. The general plotline is a very familiar one – that of childhood friends, one who makes good in a respectable field and one who turns to a life of crime – which means that it takes considerable skill to make it special. That skill comes in spades from almost everyone involved. Siodmak is a given, but his contribution is matched by the tremendous script from Richard Murphy and Ben Hecht, and two leads that play so well off of each other. 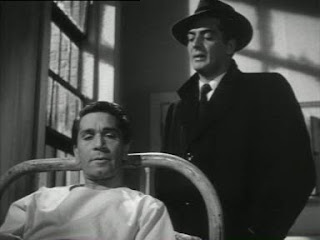 Martin Rome (Richard Conte) is a charismatic and brutal hood who is wounded in a shootout with police officers. Recuperating in a hospital under police surveillance, detectives begin questioning him about a recent jewel robbery. When he is visited by his fiancée Teena (Debra Paget), the police believe that he is meeting with someone else involved in the robbery. Rome refuses to reveal her identity, which in turn heightens their suspicion. The truth is, Rome had nothing to do with the heist. Shortly thereafter a shady defense attorney named Niles (Berry Kroeger), representing the man who is actually responsible for the robbery, approaches Rome to take the rap for that robbery since he will already be going to prison for shooting a cop. He says he will pay Rome $10,000 to do it. But if Rome refuses, he says that he will implicate Teena in the heist and send her to prison. Rome snaps, determined to get out of jail and do what he can to save Teena. After managing a daring prison escape, Rome is determined to get to Niles and, if possible, get his hands on the jewels that everyone thinks he already has. Pursuing him every step of the way is Lt. Candella (Victor Mature), a childhood friend of Martin and someone who was like a son to the Rome family. He obsessively hunts Martin, while at the same time showing a loyalty toward the Rome family. I’ll leave the synopsis here somewhat vague for those that haven’t seen it. It’s not that there are any great spoilers that could be revealed, but it’s always nice to go in relatively fresh.

The first thing that anyone familiar with Siodmak’s work will notice is that he, identified as a prototypical studio director, incorporates location shooting into the film. Siodmak evidently went on record as saying that he never felt entirely comfortable outside of the confines of a studio lot – and who can blame him when you see the spectacular atmospherics he was able to create in films like The Spiral Staircase and his other noirs. He may not have been comfortable, but the results are equally impressive. The streets of Little Italy are not Spiral Staircase-like dark, but look more like there is a constant mist or haze looming over the entire area. Compositions of shots – many of them simple yet so effective – result in a number of unforgettable sequences. Siodmak films the meeting between Martin and Teena in the hospital by positioning the camera to shoot them through the bars of the headboard of the hospital bed. The prison escape may lack in action but it is filmed as only Siodmak could do it to amp up the tension. My personal favorite is the confrontation between Martin and Niles after Martin has escaped from prison. I won’t reveal much about it, but just say that it brings a sly smile to my face each time when I realize how playful Siodmak is in that instance.

The script and acting complement each very well. Richard Murphy and Ben Hecht were both veteran screenwriters and the strength of their writing is a major reason why the routine story remains interesting. Very early in the film, the charisma of Martin Rome, played brilliantly by Richard Conte, radiates off the screen. He lays in a hospital bed, wounded and under arrest for shooting a policeman, and is as cool as if he just woke up from an afternoon nap. Conte plays him so cool that, as a viewer, it’s almost impossible not to root for him. The authorities continually refer to what a brutal criminal Rome is, but none of that seems apparent to the audience. What Murphy and Hecht do is let these evil characteristics slowly begin to emerge as the story progresses. The closer that Candella gets to Rome, the more that Martin’s dark side starts to make him appear repugnant.

Since I don’t know where to direct anyone in order to see this – I’ve never seen it played on TCM, but maybe it will at some point – I say that if you have the opportunity, jump on it. Not only does this top my list of noirs I’m dying to see released on DVD, but it probably tops my list of all films I want put out. It likely won’t do any good, but I will close the write-up with a plea to those who own the rights: Release this film!
Posted by Dave at 12:05 AM