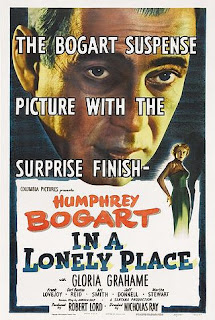 - “I was born when she kissed me… I died when she left me… I lived a few weeks while she loved me.”

The further I dig into the work of Nicholas Ray, the deeper my appreciation of his craftsmanship grows. His visual style is well-documented, and one need only watch something like his aerial shots in They Live By Night to immediately grasp the fact that he had an eye for space and camera movement on par with anyone else in Hollywood. Such technical skills certainly impress me, but what comes through most in his work is the passion. Everything the man directed seems to ooze intensity, whether it is a passionate relationship, a boiling anger, or an unbridled obsession. Nearly all of his films feature characters that openly display this type of raw emotion, which Ray would expertly balance with moments of compassion. This resulted in characters that felt not like players in a film, but fully-developed, lifelike people – sometimes likable, sometimes reprehensible; sometimes gentle, sometimes violent; sometimes caring, sometimes heartless. Like you or me, like real people. For all of the talk of certain types of films or filmmakers creating “ambiguous characters,” Ray’s films remind me that _all_ people are morally ambiguous at some point; some just have a penchant for leaning more toward the dark than the light, or vice-versa.

This comes through loud and clear in what I consider the finest film Ray ever made, 1950’s In a Lonely Place. Big-screen idol Humphrey Bogart gives the darkest performance of his career as Dixon “Dix” Steele, a Hollywood screenwriter who hasn’t seen success in years. He previously enjoyed success, but then reached the point that he could not churn out mundane scripts at the rate that studio executives demanded – he contends that he has to find a story that he truly believes in. So rather than filling his time with work, Dix’s life begins a continual cycle of alcohol and violent eruptions of his legendary temper. One night at popular Hollywood hangout Paul’s, Dix’s agent (Art Smith) tells him he has a novel that a studio is asking to be adapted for the screen. They want Dix to write the screenplay, but Dix shows very little interest in doing any work. Since he refused to read the actual novel, he decides to bring hatcheck girl Martha Stewart (Mildred Atkinson), who recently read it, to tell him the story. After a couple minutes, Dix quickly comes to the conclusion that it is another disposable story and sends Martha on her way. When he awakes the next morning and is greeted at his front door by longtime friend Brub Nicolai (Frank Lovejoy), a police officer, he is told that Martha was murdered shortly after leaving his house. 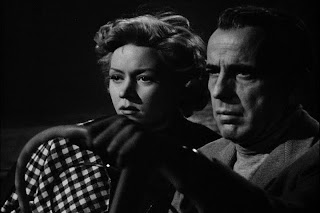 Dix naturally becomes the lead suspect in the case, but an unlikely witness provides him with enough of an alibi to convince the police to release him pending further investigation. Struggling actress Laurel Gray (Gloria Grahame) recently moved into Dix’s apartment complex and testifies that she was up late that night and saw Martha leave the apartment alone. After his release, Dix grows closer to Laurel and a torrid affair begins. The love interest spurs Dix’s creative muse, as he sets off on his most productive writing sessions in years. This results in his producing a brilliant script and plans for marriage with Laurel. But the murder investigation hounds them at every turn, and the more that Laurel learns about Dix’s past – including multiple arrests for assault and other violence – the more she questions the relationship. Is it possible that he really did murder Martha? Even though she doesn’t think so, the question threatens to plague any future plans they make.

The movie runs barely over an hour and a half, which I point out because the economy of it all is astounding. Over the 94-minute running time, Ray guides the viewer through a maze of emotions and interpretations. When the mysterious murder is announced, it is actually pretty obvious to the audience that Dix is not the culprit. We saw Dix give Martha the cab money, send her on her way, and then retire to a hibernation-like sleep. So unless you think Nick Ray is going to pull off one majorly unbelievable swerve, then it is obvious that Dixon did not commit the murder. Or is it? Writers Edmund North and Andrew Solt expertly pace the revelation of details concerning Dix’s violent past, while Ray perfectly times the inclusion of brutal outbursts to ensure that the suspicion festers. The greatest example of this, and arguably the best scene in the entire film, takes place when Dix visits Detective Brub Nicolai and his wife for dinner. While discussing the case, Dix argues that as a longtime writer of murder mysteries, he could solve the crime easier than could the police. Dix sets up a recreation of the fateful car ride, instructing Brub and his wife Sylvia (Jeff Donnell) to act it out. As Dix describes the horrible actions, he becomes completely caught up in the storytelling, in the process getting Brub overwhelmed as well. As Dix gets more amped up in describing the strangulation, Brub loses his own self-control and begins squeezing his wife’s neck to the point that she screams for help. The sadism that can be seen in Dix’s eyes as he narrates the murder makes the question seem even more up in the air. 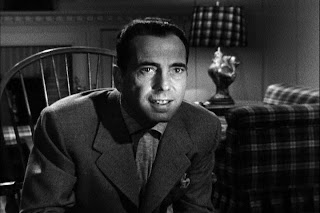 Still, like Laurel in the film, the viewer is likely to remain at least somewhat confident that Dix did not commit the murder. The greatness of the film derives from the fact that solving the mystery becomes unimportant. The question eventually becomes not did he do it, but does it even matter? Even more terrifying for Laurel is the realization that he is certainly capable of doing something that wicked. That awareness, even without confirmation one way or the other on the actual murder, is enough to keep her from committing. Grahame’s performance as the alluring Laurel is, in my opinion, the finest of her career. The conditions under which she worked on this film are also legendary, as her marriage to director Nick Ray was already starting to fall apart when filming began. It is amazing to consider how their deteriorating relationship mirrored the doomed affair of Dix and Laurel. As Dix began to enter the greatest creative outburst of his career, his relationship with Laurel crumbles under the pressure. So too did the marriage of Ray and Grahame, who separated during filming and would divorce two years later. 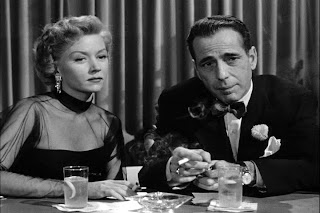 Also fascinating is how In a Lonely Place provides commentary on the effect that the Hollywood culture can have on those around it. This is a different interpretation from what is done in another 1950 classic, Sunset Boulevard. In that film, Wilder examines how Hollywood treats past stars, the people that are no longer profitable to those in power. In a Lonely Place looks at what can happen to entertainment personalities who are right in the middle of it all, trying to make a living and get by in that same world. It seems to show that even those who are finding work, who are still productive, can find it just as isolating as those that have been cast aside.

Little more needs to be said about Bogart’s performance – others have said it more articulately than I can. I still maintain that while Rick Blaine is certainly his most iconic role, his performance as Dix Steele is his best. Only Bogart’s turn as Fred C. Dobbs even approaches the same level of darkness seen in Dix. Watching him fight inner demons for the entire film is both unnerving and spellbinding. This is not necessarily a pleasant film to watch, but the craftsmanship on display from the Ray, the principle actors, and the great Burnett Guffey make it so powerful that you can’t help but return to it.
Posted by Dave at 12:05 AM