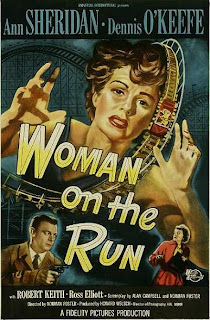 And now we come to Exhibit B (Exhibit A is #58 in this countdown) to reinforce the point that I made in my entry for Journey Into Fear. Orson Welles may have been the largest influence over that 1943 effort, but it was not because Norman Foster was incapable of directing a top-flight film noir. As outstanding as Kiss the Blood Off My Hands is, this release two years later remains my favorite that Foster directed. It is another noir-thriller hybrid that continuously amps up the tension until reaching a memorable finish at a beachside amusement park. Basically, this paragraph is a drawn out way of concluding that regardless of his actual role in Journey Into Fear, Foster released two outstanding noirs that cement his reputation as a preeminent director of noir.

Like other great B movies of the era, the action that kick-starts the entire adventure occurs very early. While taking his dog for an evening stroll, Frank Johnson (Ross Elliott) witnesses a murder. Hearing the dog bark, the killer turns and takes a shot at Frank, but luckily misses. Fearing that the killer will come back to silence him, Frank slips away from police and goes into hiding. His wife Eleanor (Ann Sheridan) is enlisted to track down the fleeing Frank. Eleanor and Frank’s marriage had been deteriorating, but old passions are rekindled when Eleanor realizes how much trouble her husband is in. She is assisted in her search by ace reporter Daniel Leggett (Dennis O’Keefe), who shows a determination to see that Eleanor finds her husband. There is a major, if somewhat predictable, plot twist that occurs a little after the midway point that adds yet another layer to the intrigue. I see no reason to give it away, but it certainly works smoothly. 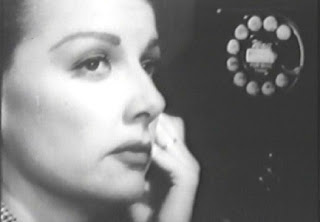 Dennis O’Keefe and Ann Sheridan were known commodities by 1950, so it is no great surprise that they both turn in outstanding performances. As good as O’Keefe always is, though, it is Sheridan that is the powerhouse of the film. Eleanor does a near complete transformation – at the start of the film she is completely uninterested in what happens to her husband and by the conclusion she is frantically scrambling to rescue him. It is a nuanced performance, as Sheridan moves easily from being an intimidated, disinterested wife to a wise-cracking, brash amateur sleuth hot on her husband’s trail. There is a lot to like visually in this B-picture as well, with Foster and cinematograph Hal Mohr taking full advantage of location shooting in San Francisco. They take the viewer throughout late night haunts, bars, and clubs throughout the City by the Bay, while also making full use of ink black nighttime exterior shots.

Much more discussion about the actual story will run the risk of revealing too much for those that haven’t seen it. What I will add is that this is a movie that is in the public domain and can be legally watched at various places online. The quality at places like Archive.org is not great, but it’s far from unwatchable, particularly if (like me) you have the capability of connecting the computer to your television. But however you get hold of it to watch, Woman on the Run is definitely an essential noir and in my opinion the best movie that Norman Foster ever made.
Posted by Dave at 12:05 AM