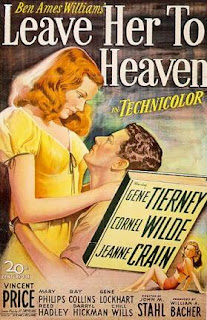 John M. Stahl, a master of melodrama in the 1930s, takes this soap opera story and infuses it with noirish themes and images. The story is told in flashback, as one resident of a lakeside community relates the plight of Richard Harland (Cornel Wilde), a man recently released from prison who is returning to the city. The man recounts how Harland met the stunningly gorgeous Ellen Berent (Gene Tierney) on a cross-country train and the two instantly hit it off. A romance quickly develops, leading to Ellen spurning her former fiancé Russell Quinton (Vincent Price), and becoming engaged to the successful writer Richard. Slowly, it begins to emerge that the root of Ellen’s obsession with Richard likely stems from the fact that he is a dead ringer for her now deceased father. She was deeply devoted to her father and it is believed that she longs for a replacement. When the two are married and move to the Harland home in Maine, Ellen’s mental instability becomes apparent. She is unbelievably possessive of her husband, even to the point of spurning his handicapped brother. Eventually, this obsession begins to lead to even darker things, including murders and mysterious accidents that eventually bring about her husband’s downfall. 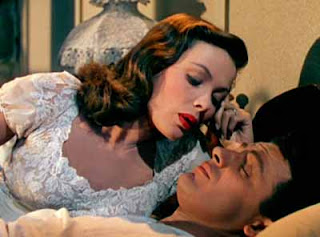 This is another example of a movie that does not follow the traditional noir template. The entire story takes place in scenic mountain ranges or inside lush resorts and houses, following characters who are at home in high society circles. These are not the usual everymen or fast-talking dames that populate so many noirs. Even more noticeable is the Technicolor photography. It’s already been established in this countdown that color need not exclude a movie from being considered a noir, but it is used a bit differently here than in House of Bamboo or Niagara. In those cases, a morose atmosphere was created that equaled anything that could have been created in black-and-white. The colors here are at times vibrant, with sweeping landscape shots. The use of these vibrant colors produces such dissonance by contrasting with the incredibly dark personality and behavior of Ellen. 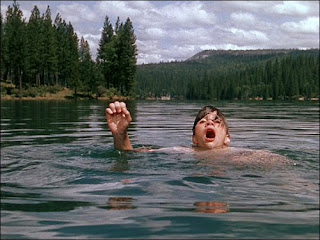 The most famous scene in the entire film more than earns its infamous reputation. Truth be told, the sequence in which Ellen allows Richard’s handicapped brother Danny (Darryl Hickman) to drown is as chilling as any that I have ever seen. It’s amazing that I am saying this about something filmed in 1945, when the Code certainly limited how cruel things could be portrayed. But it’s a credit to how the scene is set up by Stahl. Rather than continue with the Alfred Newman score that accompanies everything else in the film, for this sequence he cuts the music and allows only the natural sounds of the lake to be heard. You hear birds chirping, wind blowing, and the gentle ripple of the water as Danny struggles to continue swimming. You hear Danny squeal for help, begging Ellen to assist him because his injured legs are tiring. After seeing Danny’s head go under for a third time, the camera then turns to watch Ellen sit their motionless, without a hint of emotion on her face. It’s chilling, there’s no other way to describe it. 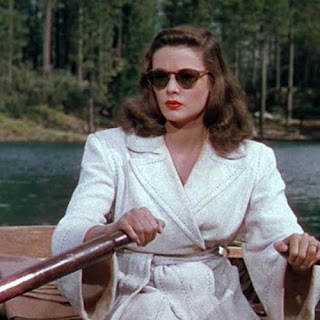 The deficiencies of the film are certainly visible – I always have trouble warming the pseudo psychology that is often found in films of the era; and the courtroom scenes are atrocious, which was typical of the times – and I definitely think that it works better in certain individual spots than as a whole. But there is too much here too appreciate for it not to be included in this countdown. Leon Shamroy’s cinematography is unique, with everything covered by the faintest orange hue, as if there is something smoldering under every action. And Gene Tierney, who was nominated for an Academy Award for her role (she lost to Joan Crawford in Mildred Pierce), gives a surprisingly nuanced performance. The all-consuming obsession that her character is known for is certainly what is most memorable, but before she is consumed by her passions, Ellen is actually sympathetic. You actually feel for her as she is devastated by the loss of her father, which makes it all the more jarring as she starts her decline into paranoia.

Oh, and anyone else agree that a case can be made for Gene Tierney being the most beautiful woman of the entire era?
Posted by Dave at 12:05 AM