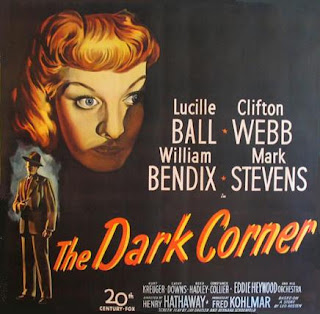 - “I can be framed easier than ‘Whistler’s Mother’…”

There are some actors or actresses that are so inextricably linked to their most famous roles that it is almost impossible to separate them. Regardless of a viewer's generation or age, some actors are instantly identified by their most famous role. Not many reach this level, but a few instantly come to mind, and for whatever reason the majority of them come from TV. For instance, Jerry Seinfeld will never be anyone other than Jerry Seinfeld, the midlevel comedian of the famed sitcom. From here on out, James Gandolfini is going to have trouble being viewed as someone other than Tony Soprano. Possibly the greatest example of this phenomenon in the history of entertainment is Lucille Ball. It’s impossible to even say the name and not get images of her wacky routines of mashing grapes or stuffing candy into her mouth on a speeding assembly line. She will always be viewed as one of the great comediennes of all time. One of the marks of a truly great actor, I believe, is the ability to break away from past iconic performances and become completely believable in any new role. While her role here certainly won’t make you forget the classic run on I Love Lucy, The Dark Corner is at least validation that Lucy was versatile enough to pull off a traditional wise-cracking, sultry performance. 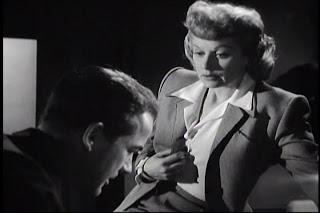 Lucy plays Kathleen Stewart, a secretary for the recently-paroled private investigator Bradford Galt (Mark Stevens). As Kathleen soon learns, Galt did two years in prison after being set up for a manslaughter charge by his ex-partner Anthony Jardine (Kurt Krueger). After being released from jail, Galt moved from San Francisco to Manhattan with the hopes of getting a completely fresh start. But when he takes the lovely Kathleen out for a night on the town, the discovery of a conspicuous tail in the form of a white suit-wearing private eye (William Bendix) proves to Galt that his past is still following him. After roughing up the PI, Galt is led to believe that Jardine is once again scheming to set him up. Still steaming from his earlier prison stint, Galt worries what he might do if he catches up with his old pal. This is why he tells Kathleen that she would be smart to forget about him and go on with her life. It doesn’t work, as Kathleen is a resolute woman who repeatedly tells Brad that she is “playing for keeps.” As the two search into the supposed plot by Jardine, and bodies start to fall, it slowly emerges that someone other than Jardine may be the one truly pulling the strings.

As has been pointed out in many noir surveys and overviews, The Dark Corner displays a similar postwar malaise to that of the more-celebrated The Best Years of Our Lives. In this case, rather than returning war veterans, though, Galt is an ex-con who has aspirations of resuming his life and work as a private eye. He hopes that a simple cross-country move will be enough to allow his life to go back to normal. But as Al Stephenson, Fred Derry and Homer find out in William Wyler’s classic, it’s never that easy to go back to the way things were. Right from the start of the movie Galt is reminded of his history – a detective comes to keep tabs on him and then he sees a man following him that night. So while his quick use of violence is still jarring in a “hero,” it seems at least understandable as more is revealed about his past. Mark Stevens plays Galt well, never making him an over-the-top manic, but maintaining a seething anger about the course his life has taken. The entire cast turns in admirable performances, and it is enjoyable to see the often affable William Bendix playing a tough guy role. 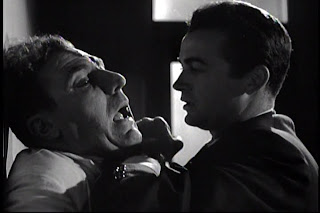 No introduction is needed for director Henry Hathaway and director of photography Joseph MacDonald – this is Hathaway’s third appearance in the countdown, while MacDonald’s work has been included four previous times! In terms of visual artistry, my favorite work from either man probably remains the beautiful Technicolor of Niagara. They still turn in impressive work here, making great use of lights and darks according to specific characters and settings. When Galt is involved, particularly in his office or when he is interacting with equally shady characters like Bendix’s Fred Foss, shadows obscure faces. The lighting of Hardy Cathcart (Clifton Webb) in his art gallery is considerably lighter, until his role in the plotting begins to be revealed and things grow dimmer around him as well. They also combine for some wonderfully simple, memorable touches, like photographing a hugging Galt and Kathleen via the mirror they are standing in front, giving a shot from the rear and the reflection of the faces.

The screenplay from Jay Dratler and Bernard Schoenfeld is also very good, with some wonderfully dry one-liners and repartee between Galt and Kathleen. My personal favorite is the discussion between the two about the man following them. Kathleen tells says she has never been followed before. Bradford quickly responds: "That's a terrible reflection on American manhood." Lines like this are sprinkled throughout.
Posted by Dave at 12:05 AM