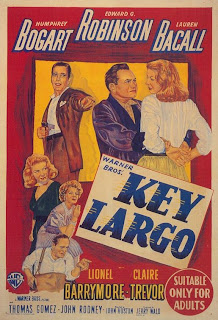 Another case of a movie that is probably more properly labeled a gangster movie, but here I am going to flat out admit to being swayed by conventional wisdom that just naturally places Key Largo as a film noir. It’s a debatable point, but I don’t feel like expending the energy of debating whether or not to include it. My definition of film noir is large anyway, so this one ultimately has no problem in qualifying for this countdown. The resort atmosphere of the Florida Keys is certainly atypical for a noir, but the hurricane gives the shadowy lighting and darkness to lend it a noirish atmosphere. Plus, when it comes right down to it, it’s just too much of an enjoyable film for me to pass up the opportunity to write about it.

I’ve always been fascinated by how the stage play origins of the film are glaringly obvious, which is usually a negative. In the story, returning veteran Frank McCloud (Humphrey Bogart) visits the Key Largo resort owned by the family of a dead war buddy. There he meets the man's father (Lionel Barrymore) and widow Nora Temple (Lauren Bacall). While Frank is visiting, the resort is taken over by a group of gangsters led by the notorious Johnny Rocco (Edward G. Robinson) and his entourage which includes a number of minions and girlfriend Gaye Dawn (Claire Trevor. Due to the hurricane moving into Key Largo, he is forced to set up camp in the hotel. While Rocco holds Frank and the Temple family hostage, Frank slowly moves from not wanting to be involved in the situation to growing protective of Nora and James. The closed confines of the resort are vital to the success of the story. The claustrophobic feel seriously heightens the tension. It is an interesting dynamic that is created, with the deterioration of relations between the fugitive gangsters and resort owners mirroring the worsening of the weather outside. So while it quickly becomes obvious that with the exception of the outdoors scenery, we are essentially watching a play on film, it’s so well done that it never matters. 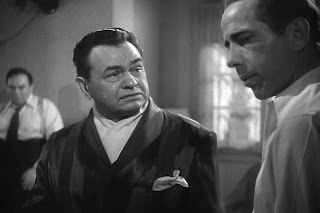 The key reason it doesn’t matter is because of the astounding level of talent involved. The great John Huston not only directs, he also co-wrote the adaptation of Maxwell Anderson’s play. While certainly not his best, it is still impressive work from Huston, as he had quite the stars to coordinate during production. In Edward G. Robinson, Huston was working with the most iconic of on-screen gangsters in his final gangster role. It would mark the first time that Robinson would work with Humphrey Bogart and not receive top-billing. The reason is obvious, as this is prime-era Bogart. In the previous six years he had a run of films as impressive as any actor in the history of cinema, among them: Casablanca, To Have and Have Not, The Big Sleep, and the same year’s The Treasure of the Sierra Madre. I’m not arguing that Key Largo is as good as any of those, but it’s impressive movie to keep his red hot 1940s run intact. This would also be the final film that he and wife Lauren Bacall would make together. The performances are as expected from both of them, but Houston was wise not to focus things entirely on the wildly popular duo. Robinson and Claire Trevor provide outstanding performances of their own, serving as a counterpoint to the harmony of Bogey and Bacall. Lionel Barrymore is also smooth in his role as the wheelchair-bound proprietor. 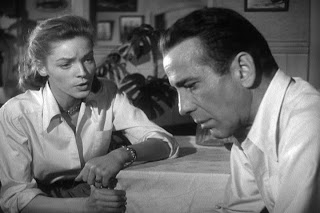 The tension builds to a well executed, if un-noirish conclusion. Even so, I quite like the realization that is made by McCloud at the finish. While far from the best of anyone involved, Key Largo remains a delightful film to watch and I definitely intended to find a place for it in the countdown.
Posted by Dave at 12:05 AM