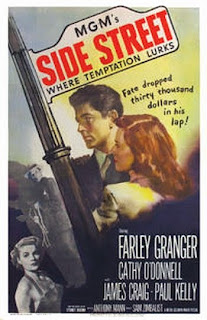 On the heels of Nicholas Ray’s They Live by Night, we now move to another O’Donnell-Granger collaboration. Their work together here came two years after they made They Live by Night. Sandwiching the two together is really a crafty way of sidestepping making a definitive decision on which of the two that I prefer. In the end, I go with Side Street, a movie that has slowly, quietly worked its way up this list. I’m not too concerned about plot summary on this one, being more interested in getting down some thoughts on director Anthony Mann and his work in this film. For completeness, though, I’ll at least give a quick synopsis. Joe Norson (Farley Granger) is a part-time mailman who is trying to make a decent living to provide for his pregnant wife (Cathy O’Donnell). On one of his stops, Joe spots an envelope that he believes holds a few hundred dollars. Swiping it in order to help with the finances at home, he soon is horrified to learn that he has stolen $30,000 that is the proceeds from a blackmail scheme. With the extortionists now looking for their money, Joe much go on the run in order to protect himself and his wife. 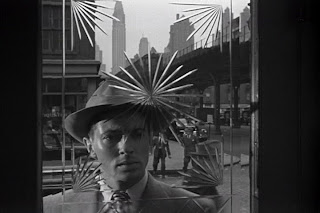 I love Anthony Mann. No other way to express how highly I think of this workingman’s director. I find something incredibly admirable about a guy who literally worked his way up through the ranks of Hollywood, moving first from assistant director at minor studios like Republic, to heading his own B-crime films and eventually going on to his string of westerns for which he is best remembered. I always go back and forth on how I prefer my Anthony Mann – whether it is his gritty noir dramas or his cerebral westerns. Both series of films are worthy of being compared to any of his contemporaries. The fact that Side Street is commonly cast aside as a minor Mann, is an indication of how strong his other noirs of the era really are. Perhaps what makes his best films in both genres equally as appealing is the fact that Mann infuses his characters with the same psychological edge or anguish, regardless of whether they are working an undercover sting operation or riding hard to catch a killer. Besides the visual artistry of Mann, which is obvious to anyone with even a passing knowledge of his style, this is what sticks with me most from his films. And in the end, it is what actually does make Side Street slightly below top-tier Anthony Mann. 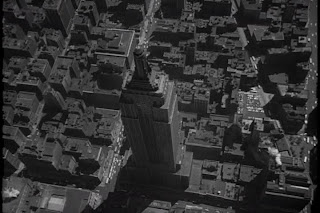 Reading an expression like “slightly below top-tier” at this point in the countdown might give someone pause or make them wonder why it is then ranked at #68 ahead of some outstanding films. But this is the case only in comparison to other Anthony Mann work, not in the sense that it is a poor film. It might be a bit routine in its narrative, not quite as psychologically anguishing, but watching the director’s use of the camera is like watching an artist in real time. The man could tell a story visually, and in certain sections of Side Street, nothing else really matters but what Mann wants to show you. What becomes so impressive about Mann’s style in Side Street is his versatility as a director. I haven’t yet had the occasion to write about Mann’s early noirs (those will be highlighted further into the countdown), but they are instantly recognizable for his work in tandem with cinematographer John Alton. In those classics, Mann became famous for his use of expressionistic lighting and low camera angles (just look at the screencap in my entry for He Walked By Night, it has all the hallmarks of classic Mann). In this film, given a bigger budget by MGM, Mann adapts to gorgeous location shooting in New York City. The lighting is no longer manufactured, stark light-dark contrasts, but instead he lets simple things like natural light playing off the tall buildings of the city create the shadows. And his use of the New York exteriors is equally as impressive. He uses sweeping aerial shots to convey the overpowering immensity of the entire city, but also to show how labyrinthine the streets can be. It underscores the noir precept that Joe Norson can stay on the run for as long as he pleases, but that escape is unlikely. It’s not quite as memorable as the pairings with Alton, but Mann does fine work here with award winning cinematographer Joseph Ruttenberg. 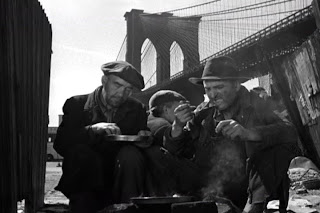 This was the last noir that Mann would make, as he moved onto westerns in the same year. It might not be the equal of his best noirs, but many other directors would love to have one of this quality on their resume.
Posted by Dave at 12:05 AM