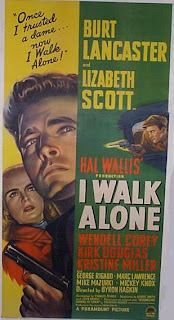 Kirk Douglas opened his acting career by starring in three classic noirs in as many years. Think about it – from 1946 to 1948, Douglas made four total films, three of which will (drumroll please...) find their way into this countdown. The last of those three classics comes in here at #65 and is without question the least-known of the trio. With no proper DVD release (for any region that I’m aware), this is an under-viewed gem that most will only get to see if it pops up on Turner Classic Movies or they decide to track down a DVD-R copy like I did. Led by Byron Haskin making his directorial debut, I Walk Alone takes a unique angle on the ex-con returning to the streets after a long prison stretch. Rather than portraying Frankie Madison as someone trying desperately to go straight, instead he is shown to be a man who is simply determined to claim what he believes to be his. He has no compunction about returning to a life of crime, nightclubs, and shakedowns – as long as he is given what he thinks he earned by doing his stretch. The unique thing about this story is that the criminal world itself appears to have passed Frankie by, rendering him an anachronism in the underworld. 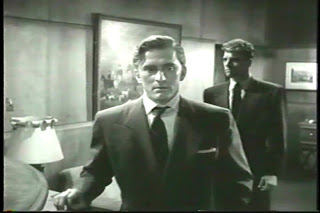 Frankie Madison (Burt Lancaster) and his partner “Dink” Turner (Kirk Douglas) made their mark on the underworld during Prohibition, becoming highly successful rumrunners. On one of their late night runs they became cornered by the police and decided to split up and see if at least one of them could make it to freedom. On the spot, they struck a deal that whoever made it will keep the enterprise going and split all of the profits right down the middle. Frankie was apprehended and gets 14 years, while Dink escaped and began building a semi-legitimate empire in his partner’s absence. The movie opens with Frankie's release, following him as he goes to Dink’s highly successful nightclub with the belief that he is a partner and has a large sum of money coming his way. Unbeknownst to Frankie, though, is the fact that Dink has been using dummy corporations, legal technicalities, and the help of Frankie’s longtime accountant friend Dave (Wendell Corey), to swindle any claims Frankie has to his share. When wooing Frankie with the beautiful Kay Lawrence (Lizabeth Scott) fails to placate him, Dink decides to stand behind the technical safeguards he has assembled. Thus, Frankie comes after him with a group of thugs, but quickly realizes that grabbing his 50% is not as simple as he thought – shell companies, corporate entities, and other legal speak well above Frankie’s capacity make it virtually impossible for him to take over. He simply is not accustomed to this new quasi-legitimate world of crime. 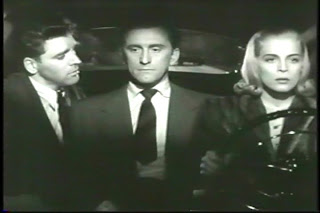 All of the characters are distinctive, and it’s interesting to watch everyone involved looking out for their own best interest. Although a few will eventually make a turnaround, the majority of the film is each person doing their best to maintain what is theirs. Frankie wants his cut of the proceeds and is determined to take them by force if necessary. Dink just wants to maintain the legitimate image and wealth that he has crafted for himself. Dave, who clearly has affection for Frankie, still can’t help but aid his swindle because he recognizes that it will mean a safer life for himself. Even Lizabeth Scott’s Kay, who spurns the femme fatale role that Dink tries to manipulate her into, becomes torn by loyalty toward both Frankie and Dink.

Byron Haskin directed only two noirs in his career, both of which are outstanding. In this film he is very successful in establishing a dirge-like progression to the narrative – at no point do you think that Frankie is going to effectively claim his share of Dink’s profits. But he also shows himself to be capable to creating very intimate, romantic scenes, which helps to quickly establish the connection between Frankie and Kay after just one meeting. 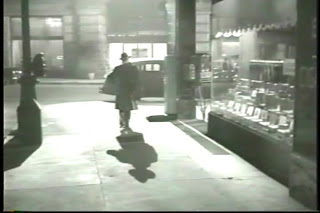 This review also would not be complete without throwing up a link to the New York Times review written by Bosley Crowther shortly after its release. Maybe it’s just me, but I find it hilarious when he declares, “Producer Hal Wallis should have read the Code,” because in his opinion Frankie the criminal is portrayed too sympathetically. While meant to be a criticism, the fact that someone saw Frankie as that sympathetic – to the point of violating the Hays Code – speaks volumes of how effective this movie is.
Posted by Dave at 12:05 AM