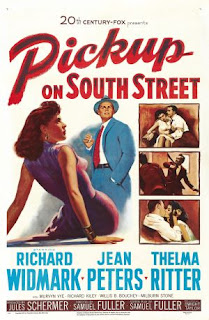 We’re to the point in the countdown now where distinguishing many of the films, and putting them in precise rankings, is a herculean task. I try to be as precise as possible, crafting a favorites list that will hold up for at least some period of time. As all of the other list junkies in the blogosphere know, it’s impossible to create a list that will remain completely fixed and unchanging. So much just depends on one’s outlook, mood, or recent viewing, all of which are things that can change rapidly. At this moment, I could be high on a particular movie, the next my passion might have inexplicably tapered. That’s just how it goes with list making, I suppose, but it’s still worth pointing out, because even I am somewhat shocked at slotting in Samuel Fuller’s Pickup on South Street at #55. When I made my original rough draft for the project, I had Pickup in the Top 40 and was fairly certain that it remained my favorite Fuller film. But for the sake of completeness, I re-watched a number of films to solidify the ordering, and this was one that I revisited. As you can probably surmise from this opening paragraph, something about this viewing experience was not as powerful as in the past.

This is not to say I am no longer a big fan – look where I rank it and some of the classics that are solidly behind it in the countdown. I still consider it among my two or three favorite Fuller films. What struck me about Pickup this time around was the impression that, similar to Wise’s Born to Kill, it ultimately comes up a bit short of fulfilling the promise of some outstanding individual elements. 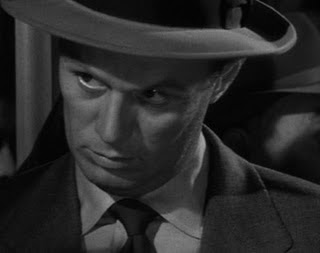 The story is set up right from the opening sequence, as the camera follows the work of professional pickpocket Skip McCoy (Richard Widmark). Recently released from jail after his conviction was tossed out due to dubious police practices, McCoy is looking to make a profitable score. Instead, he picks the pocket of Candy (Jean Peters), the girlfriend of a Communist spy. Rather than lifting money, McCoy lifts a roll of microfilm that Candy has been sent to deliver to a Communist cell. The result is that McCoy quickly becomes the target of two very different groups – the police and FBI are after him in order to grab the microfilm before it falls into enemy hands, while the Communists scurry to grab the film before it’s too late. Caught in the middle is Skip, the unscrupulous crook who begins to play both ends against the middle. Things become even more complicated as Skip and Candy begin to develop an attraction, meaning that simple monetary gain does not remain Skip’s only focus.

The high points of the film are quite high. Fuller’s direction is at times flawless. The opening, wordless subway sequence, in which the camera follows the maneuvering of McCoy as he works to stealthily to pick Candy’s pocket, is incredible. The trademark Fuller zooms and close-ups abound, making it obvious who is in the director’s chair. The other Fuller trademark is the ability to create seedy underworlds, subcultures and, even more impressively, the underbelly of legitimate worlds. The three-dimensional feel of the underworld is driven home in the hunt for McCoy, as the police go through a list of usual suspects and informants to track down a single “cannon” as they call him. The Communist ring feels equally as shady, even though very little is revealed about them. Even the police are shown to be far from spotless, as it is revealed that the hard-charging Captain Tiger (Murvyn Vye) has been charged with brutality. Few men could match the ability of Fuller to make the entire world feel so seedy. And this knack is given even greater force by the contribution of Joseph MacDonald. It’s like a broken record in this countdown, but if you still haven’t had the point drive home – Joseph MacDonald is one of the finest cinematographers to ever work in film. Period. 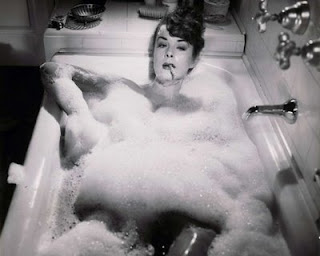 So why did this one not remain in the Top 40 where I originally had it? Like I said, the main reason would be simply that I didn’t respond to it as passionately as I had in the past. Maybe it’s a copout to say this, but it just lacked “something” for me. Pinpointing precisely what that “something” is would be difficult, which is what makes it so easy to attribute it to just a slight shift in mood or personal taste. I do know, though, that outside of Widmark’s fiery performance – he is nothing short of brilliant – the other performances now seem less impressive. Thelma Ritter was nominated for the Best Supporting Actress Oscar, and she is entertaining, but camp elements of the performance stood out to me this time around. Jean Peters is also solid, but the romance between Skip and Candy never feels completely natural. In the end, though, these individual reason are just nitpicking as I try to make out some kind of concrete explanation for dropping it in the rankings. I really don’t have one, other than that mysterious “something.”

This review has been almost entirely critical, focusing on Pickup placing lower than expected, but the only reason that I am this critical is because it is probably a film that deserves to be ranked higher. It is still a very good movie and arguably the quintessential Sam Fuller film. Perhaps I’ll regret the placement when everything concludes, but for now, I’ll stay with my instinct.
Posted by Dave at 12:05 AM