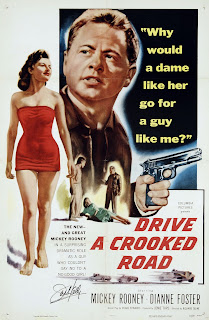 [NOTE: Parts of this write-up have been taken from a Noir of the Week entry that I penned over a year ago at The Blackboard noir message board under the screenname "BlankSlate." I'm just throwing this note up on the off chance that someone who frequents that board recognizes anything written here and should think that I nicked it. I didn't, it's all my own writing, just adapted for this countdown. Enjoy!]

Here is a very personal selection and one that is likely to puzzle folks. This might rightly be considered my first "reach" of the countdown. I don't know how many people have seen this, but judging by ratings and reviews on sites like IMDB, it connected with me far better than the majority of people. As you can tell, I don't really care. In my opinion, this is a truly overlooked film. Richard Quine in general seems to be forgotten by all but the most ardent noir fanatics. He actually made a few great noirs and this one deserves a larger reputation than it currently has. Plenty of my favorite noirs I went into expecting to be great, because they had a reputation of being all-time classics. This was one that I knew virtually nothing about, but afterward was amazed that it is never discussed or recommended.

Best known for his role as Andy Hardy in a wildly successful streak of films for MGM, it is interesting to consider the performance turned in by Mickey Rooney in Drive a Crooked Road. Rooney had appeared in roles less wholesome than that of Andy Hardy in the recent past (such as Quicksand in 1949), but never was he more effective than in his portrayal of the hapless Eddie Shannon, a lonely mechanic and amateur race car driver who is lured into a heist scheme that – surprise, surprise – does not end well for all involved. 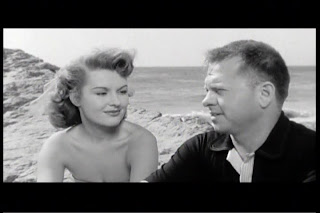 The one place where Eddie Shannon (Mickey Rooney) is sure of himself is behind the wheel of a car. The film opens to scenes of a road race in which Eddie charges to the finish-line and takes second place. In the crowd of fans are two interested observers watching the drivers intently. They are Steve Norris (Kevin McCarthy) and Harold Baker (Jack Kelly) and it quickly becomes obvious that they are in need of a wheelman for a job. In zeroing in on their man, Harold remarks that Eddie – with his driving skills and job as a mechanic – is “the ripe type” for their piece of work. So when a few days after the race a bombshell named Barbara Matthews (Dianne Foster) comes into the garage to have her convertible worked on and specifically asks for a man named Shannon to service it, the plot begins to take shape and the audience is given the first hint as to what is likely to transpire. Eddie is clearly intimidated by her beauty. The degree to which he longs for some sort of female companionship is made clear when Eddie coyly pockets a handkerchief he finds in the car that was left behind (intentionally?) by Barbara. Just a simple visit, with only brief interaction, is enough to lay the trap that Eddie eventually walks into.

The next day Barbara calls the garage and claims that her car will not start, so Eddie is sent to her house in order to fix it. Sitting on a front step with a picnic basket and clad in beach wear, she lures Eddie in even closer. After flirting with him, she lets “slip” precisely where she is headed in Malibu and remarks that it is never very crowded there. This is enough to get Eddie to drive to the beach, where the fateful introduction to heist mastermind Steve Norris is made. What Eddie is unaware of, and what the audience gradually comes to learn, is that Steve is really Barbara’s boyfriend and that he has sent her as bait to nab Eddie and convince him to be the wheelman in a bank robbery. It works precisely as planned. That night, after his visit to the beach, Eddie works up the courage to call Barbara and from that point forward he is completely smitten. Since I know how much I personally hate reviews or write-ups of movies that give away every last detail, I will not reveal all that transpires with the plot from this point forward. What I will say is that the filming of the heist scene is very well done. There is a perpetual feeling that the robbery is going to unravel at any moment. Director Richard Quine utilizes this apprehension to his advantage, staging key moments during the course of the robbery that leaves the audience expecting the three men to be caught immediately. The robbery eventually comes off as planned, but when Eddie realizes that he has been used by Barbara, the lives of all involved take an even harder turn for the worse. 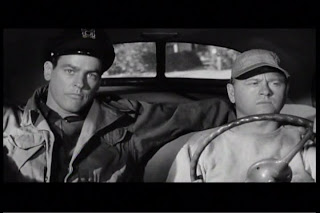 Rooney truly is outstanding in this film. The understated performance that he gives as Eddie Shannon is just the way the character needs to be played. The interaction between Rooney and Dianne Foster is good, as he is able to convey enough shyness to make the viewer understand why the character is susceptible to this plot, but not so over the top as to make it farcical. You genuinely feel sorry for Eddie and at every point are begging for him to put the pieces together and figure out that he is being played. Also worthy of praise is Kevin McCarthy. His portrayal of the scheming Steve Norris is perfectly sleazy. He is smooth, always appearing to be completely confident that he can get whatever he wants from whomever he wants – be it Barbara, Eddie or anyone else.

TCM runs this one occasionally, which is how I got a copy. For someone looking to give an unheralded film noir a shot, it's the perfect candidate.
Posted by Dave at 12:05 AM